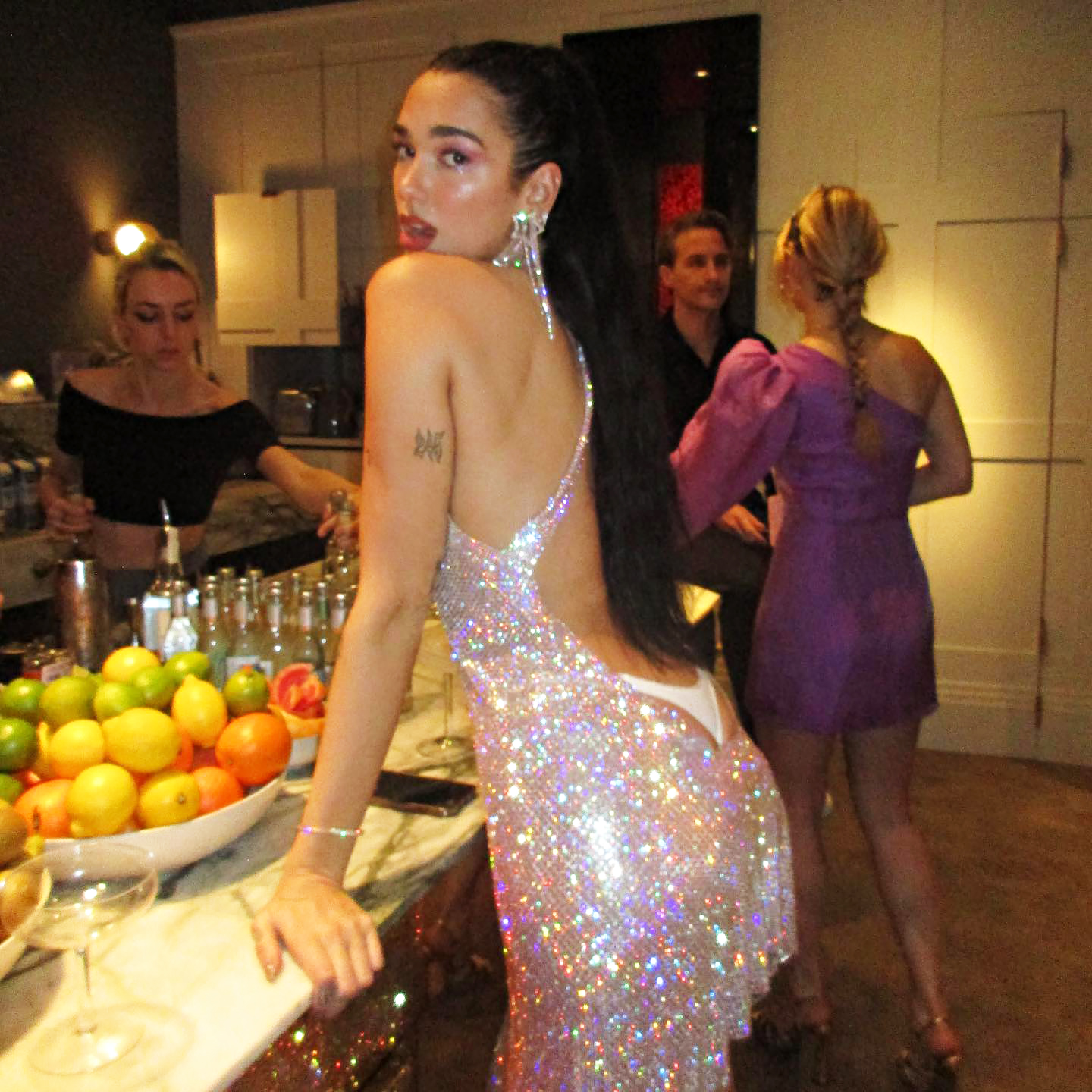 Dua Lipa ended 2022 with a (fashionable) bang! The hitmaker rang in the new year by taking a major style risk.

Every Time Dua Lipa Has Slayed a Red Carpet: Pics

The “Levitating” singer, 27, was a must-see at a glitzy New Year’s Eve party, wearing a sparkly silver dress by Ludovic de Saint Sernin. The figure-hugging frock featured iridescent material and a halter neckline. The most standout aspect of the look, however, was its completely backless construction — which was so low that it exposed the pop star’s white thong. In photos shared via Instagram on Sunday, January 1, the Grammy winner posed from the side, showing off the racy design.

Paris Hilton praised the getup, which bears resemblance to the unforgettable chainmail dress she wore to celebrate her 21st birthday in 2003, writing in the comments section, “That’s hot.”

Lipa paired her garb with hot pink knee-high boots, dangling star earrings and metallic bracelets. For her glam, the “Cold Heart” artist had her hair styled in a half-up, half-down style and sported dewy cheeks and rosy eyeshadow.

Lipa made some major career moves before the new year began. The London native kicked off her Future Nostalgia Tour in February 2022, jetting all over the world until her string of performances came to an end that November.

“Future Nostalgia — 2022 — the year that changed my life. Thank you for the lifetime of memories,” Lipa captioned a carousel of her favorite show moments after her final concert.

In addition to belting out her medley of beloved songs, the Billboard Music Award winner provided her fans with a fashion show each night. Her stage outfits included glittery catsuits by Versace, Balenciaga and Christian Dior. During one of her opening shows, Lipa was a vision in a Mugler leotard that was embellished with 120,000 crystals, the fashion house’s creative director Casey Cadwallader revealed via Instagram.

Lipa also made headlines with her love life. In December 2022, a source revealed to Us Weekly that the “New Rules” singer had sparked up a romance with Jack Harlow following her split from Anwar Hadid.

“They like each other and are both excited to see where things go next,” the insider revealed, noting that the couple met at the Variety Hitmakers Brunch late last year.

After crossing paths, Lipa and Harlow remained in contact because they “liked each other’s” vibes. “They had FaceTimed before when Jack asked Dua permission for his song about her, but that was an awkward call for everyone,” the source told Us about the Kentucky native’s single titled “Dua Lipa.”

Prior to the “First Class” rapper, Lipa was briefly linked to Trevor Noah.