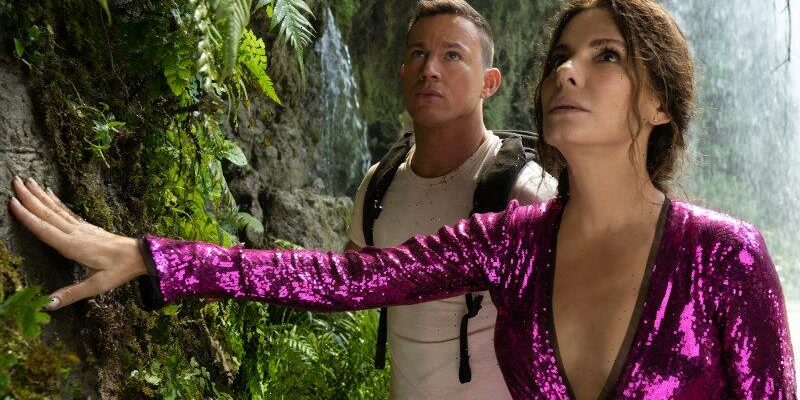 The return of the old-fashioned exotic adventure story is one of the more baffling Hollywood trends of the moment, unless it’s just a symptom of a collective need to get out of the house. In any case, the cycle continues with Adam and Aaron Nee’s The Lost City, basically an off-brand reboot of Romancing the Stone. 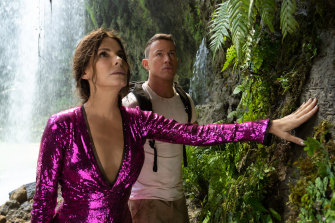 Sandra Bullock is romantic adventure novelist Loretta Sage, a shut-in who has lost her mojo after the death of her archaeologist husband. Even her fans are less interested in her latest book than in seeing her hunky cover model Alan (Channing Tatum) rip his shirt off.

In the meantime, however, the book is drawing attention in other quarters, since it may contain clues to the whereabouts of a fabled treasure on a remote island off the coast of Latin America. (Also on this island is the Lost City of the title, which proves somewhat more peripheral than you’d expect.)

A few hours into an already disastrous book tour, Loretta is kidnapped and transported to the island, still wearing the sequinned pink jumpsuit insisted on by her publicist (Da’Vine Joy Randolph). Alan leaps at the chance to be a hero for real, and soon they’re both racing through the jungle while gradually getting to know each other on a more than professional basis.

It’s all quite sweet, in its cartoonish way. Bullock may not be doing much more than going through the motions, especially in comparison to Kathleen Turner’s inventive Romancing the Stone performance – but like her character she’s an old hand at the romance game, and delivers the required balance of sharpness, warmth and melancholy.

The real drawcard is Tatum, paradoxically showing his confidence in his masculinity though his willingness to embrace the traditionally feminine “bimbo” role. In this sense the whole film works on two levels: the outward emphasis on Alan’s harmlessness suggests it could be made for mothers to watch with their 12-year-old daughters, despite a handful of risque lines.

There is not much else to say. Daniel Radcliffe is clearly enjoying himself as the pipsqueak villain, driven by fury at having been passed over as heir to his father’s media empire (if there’s a specific real-life model, I didn’t work it out). Brad Pitt presumably picked up an easy couple of million for his peripheral role as a hard-boiled adventurer who speaks in amusing non sequiturs.

The jokes in general are hit-and-miss, but more work has been put into them than into the action sequences, which are infrequent and indifferently staged. Cinematographer Jonathan Sela, who shot the first John Wick, hasn’t been allowed to bring much to the party: the look is flat and overlit, with obvious shifts between studio sets and the Dominican Republic locations.

Ultimately there is not much to recommend The Lost City beyond a degree of unpretentious good nature, plus the appeal of its stars. But depending on your fondness for Bullock and Tatum, that may be enough to make you feel you haven’t been robbed.