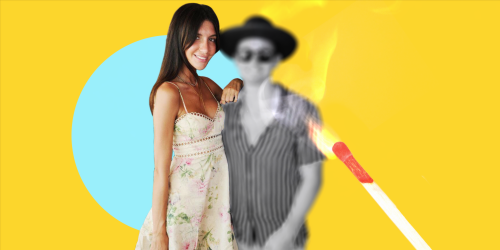 There are certain moments in life that make me question where I went wrong. When was the exact point that I teetered to the left of my somewhat stable path and ended up in my current position: sitting in a self-described gypsy’s studio in Beverly Hills Venmo-ing her $150.

“It’s a karmic tie that needs to be cut,” said the Romani woman. I had found her on Google because I was heart-broken and desperate. He was a liar, and I was in love. It had been 10 years of on-and-off dating that included a cross-country move, international jails, plans of marriage, and an illegitimate baby (not mine, luckily.) I was ready to do anything in order to move on.

When I started seeing James (not his real name), I was 19. He lived in LA, I lived in Boston. It was easy to ignore the (neon red) warning signs. I knew it was dangerous to feel ultra-attracted to someone right away. The guy could be Dracula with an actual trail of blood behind him, and I would still ignore it completely and talk about his great taste in music.

Our relationship was like a modern-day Shakespeare tale, except I didn’t end up poisoning him. We had all the same interests: food, music, humor, and culture. I loved showing him new things just as much as he enjoyed adopting them as his own. In retrospect, it was almost like a parasitic orchid, or being in love with a Dementor that’s sucking out your soul.

Things hit the ultimate brick wall when James invited me to relocate to Miami with him. Love eliminates rational doubt. Is he being shady? Is there something I’m not seeing? Does he actually look good in that fedora?

It was when I caught him lying about moving another woman to Florida too, that I finally had enough. He swore it wasn’t what it seemed, but I was just over it. It’s funny when men try to convince you that what you’re seeing in black and white is actually gray. No, it’s not. You’re just a liar.

So you can understand why I needed to call in reinforcements to help me get over this one. The Romani woman asked me if there were any of his clothes at my place. There were. “Burn them,” she said. “His clothes?” I asked. That seemed unsustainable and weird when I could just donate them. “No, burn the Epsom salts. It will clear the sadness. And throw away the clothes.” She handed me a recipe: 1lb Epsom salts, 1000ml rubbing alcohol, a wooden spoon, a metal saucepan, a match. She called the ritual an “Epsom Burn.”

I was told to put the pound of Epsom salts into a saucepan, pour the alcohol over the Epsom salts, and then light the concoction with a match. It’s the closest I’ve ever come to feeling like a character in Breaking Bad. While the fire was burning, I had to go through each and every room while banging the pan to “awaken” and clear the lingering “hidden” energies that were holding me back.

It’s the closest I’ve ever come to feeling like a character in ‘Breaking Bad.’

I have felt pretty nutty at various points in my life—leaving a DJ’s hotel room in Vegas wearing nothing but his Gloria Estefan shirt, chanting in a remote desert with 3,000 yogis, throwing up over breakfast and blaming morning sickness when I was actually hungover—but I have never felt more, um, eccentric than when I smacked a wooden spoon against a saucepan repeatedly, yelling “GET OUT!” in my empty apartment.

This space-clearing technique took about 30 minutes, not including the time I spent boxing up the clothes James had left at my place and hysterically crying. It felt like an exorcism. I got everything that belonged to him out of my apartment and threw away mementos. I went to sleep that night feeling a weird sense of relief, and also concern for the fact that I had just done a loud ritual and none of my neighbors reported me for noise. (Was I quieter than I thought or were they just not home?)

Aside from one or two sporadic text exchanges, I never spoke to James again. I fell into new things and new people. Being at home where we had once cooked dinners and talked about our plans for the future no longer felt sad. I attributed this lightness to the Epsom Burn. I did it a few more times throughout the year when I felt some heaviness come over me about certain life stresses, and it worked then, too. It was like a cup of magnesium tea for my house.

Now I like to clear spaces all the time: when I’m moving somewhere new, after a friend comes to vent over dinner, when my kitten died, in a creepy-feeling hotel room. At the end of a miserable day, I can look at my saucepan and Epsom salts and feel a strange sense calm. If you tend to gravitate towards toxic situations and toxic people, I’d suggest investing in a solid pan and a Prime delivery subscription of Epsom salts. You will eventually ward off all the negative energy until there’s nothing but good stuff left.