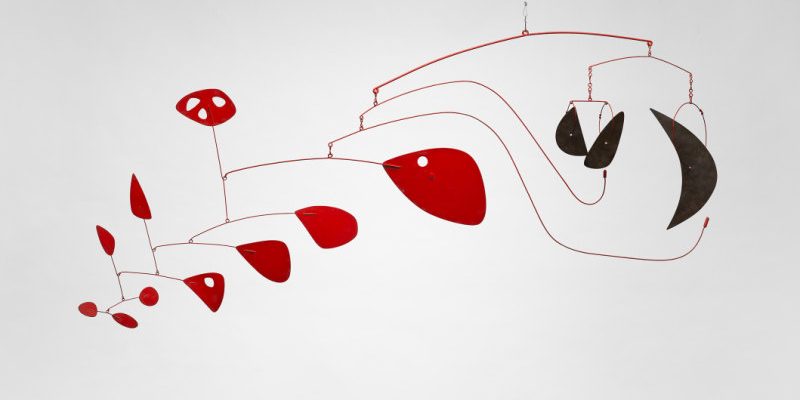 "Playful" is the word on everyone's lips as they go around the National Gallery of Victoria's Alexander Calder survey. Yet for Sandy Rower, the artist's grandson, who manages the Calder Foundation in New York, the term is completely taboo. Rower argues that to imagine Calder (1898-1976) was "playful" is to completely misjudge his character. Based on his childhood memories and a lifelong acquaintance with his grandfather's work, Rower portrays Calder as deeply serious, cultured and intellectual. 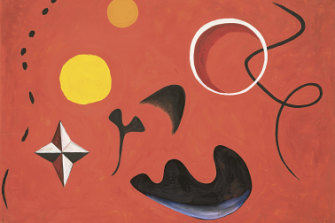 I've been pondering this apparent contradiction ever since my conversation with Rower earlier this year. Can an artist be playful and serious at the same time? Not if we assume that something "playful" must be a frivolous, light-hearted joke. Or if seriousness translates into work that is dull and difficult to fathom.

In Alexander Calder: Radical Inventor, we see an artist whose work explodes these preconceptions. Calder's radicality consists in an unparalleled ability to get viewers to relate pleasurably to completely abstract propositions.

Those people – and there are regrettably many – who tell you: "I don't go for that abstract stuff!" tend to have very different feelings when confronted with a Calder mobile.

Watching one of Calder's lightweight mobiles gyrating slowly in mid-air, the feeling is one of pure delight. We realise we are looking at an object that breaks all the rules about what sculpture is supposed to be. Say "sculpture" and most of us think of a statue in bronze or stone. Sculpture throughout the ages has been heavy, imposing, monumental, fixed firmly to the ground.

It often assumes a memorial function: commemorating some heroic figure or historical event.

Calder's mobiles fit none of these descriptions. The name was suggested by Marcel Duchamp, who was impressed by a series of small, motorised pieces he saw in Calder's studio in 1931. In French the term mobile not only implies movement, it means "motive" – that's "motif" but also "reason" and "intention". But what is the motive for an abstract sculpture? It's the kind of quandary that must have appealed to Duchamp as it could be argued that the motive is nothing more than the desire to make a work of art. Yet it could also fit Freud's more comprehensive description of the artist's motivations: "honour, power, wealth, fame and the love of women".

With Calder one can't imagine such prosaic ambitions. His mobiles come across as expressions of pleasure in their own making. When he abandoned the idea of using motors and allowed the works to drift in air they became even more lyrical in nature. 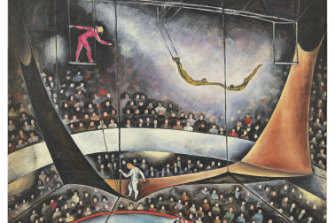 One might see Calder's mobiles, his wire sculptures and toys as an implicit rejection of the legacy of his father and grandfather, who were both successful sculptors and both named Alexander Calder. It wasn't an angry rebellion but a clear assertion of his own artistic identity.

Calder grew up in a cosmopolitan environment and began making things from an early age. He studied mechanical engineering and even spent a few years working in the field until his aesthetic instincts reasserted themselves. He attended the Art Students League in New York and earned a living as an illustrator. His quick, fluent drawings would soon be translated into wire sculptures – literally drawings in space, in which cast shadows added another dimension.

I suggested to Mondrian that perhaps it would be fun to make the rectangles oscillate. And he, with a very serious countenance, said: No.

In these years he also worked on a series of simple mechanical toys that were manufactured and sold commercially. This was the time he began the long-running project that would become known as the Cirque Calder: a miniature circus that featured an ever-growing cast of tiny mechanical figures, from acrobats and trapeze artists to the ringmaster, a lion-tamer, a trick rider and so on. Eventually the components would grow so numerous they would fill five suitcases. 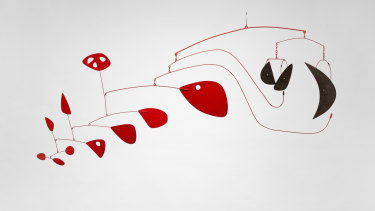 From the 1920s to the 1960s Calder would stage performances of his circus, manipulating the figurines in front of an audience like a puppet master while music played in the background. Although some accused him of being a big kid playing with toys, everyone seemed to recognise the ingenuity of the Circus. Today Calder is acknowledged as one of the pioneers of performance art.

By 1926, at the age of 30, the artist relocated to Paris and his real career began. The Eureka! moment in all accounts of his life, occurs during a visit to Piet Mondrian's Paris studio in 1930.

Each of Mondrian's studios was like a laboratory, where the Dutchman would plan his geometric abstract paintings with utmost precision. Calder was impressed by a wall on which the Mondrian had placed rectangles of coloured cardboard that were around to test out compositions.

Calder had discovered the joys of pure abstraction, which would lead immediately to a series of experimental paintings. He also had a secondary thought, recalled in his memoirs: "I suggested to Mondrian that perhaps it would be fun to make the rectangles oscillate. And he, with a very serious countenance, said: 'No, it is not necessary, my painting is already very fast.'"

Aside from the wonderful image of straight-laced Mondrian in his suit and tie pronouncing that his paintings were "fast", one notes Calder's use of the word "fun". It sounds suspiciously close to "playful". 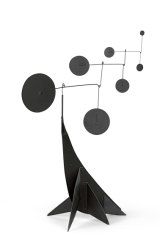 The works that were to follow would establish Calder's reputation on both sides of the Atlantic as he divided his time between the United States and France. His main home and studio would be in Roxbury, Connecticut, but he would also buy a property in Normandy and keep up friendships with the artists he knew in Paris. The mobiles were joined by stabiles – flat, multi-panelled works that stood on the ground. Calder's productivity in all areas was prodigious. He made more than 6000 sculptures without assistants.

In the latter phase of his career, in the 1960s and 70s, Calder would become a truly global artist, with mobiles and stabiles being installed in public places, not just in Europe and America, but in South America, India and Australia. Harry Seidler commissioned the work, Crossed Blades (1967) for the plaza of Australia Square, Sydney's first genuine skyscraper. The sculpture remains one of the city's most successful works of public art.

It may be the deceptive simplicity of Calder's work that makes it so enjoyable. It may be that fact that it demands nothing of us but our momentary attention as we observe the way a piece carves up space, or changes form subtly over time. The "meaning" of a work lies in the experiencing – a thought made explicit by Calder, in discussing one of his mobiles: "If it meant anything it would be easier to understand, but it would not be worthwhile."

The work of art in this formulation is not a message, not a text or a story book, it is an education of the senses. If we choose to see it as playful, it may be because so much lesser art has left us with the utterly false impression that there can be no compatibility between seriousness and pleasure.