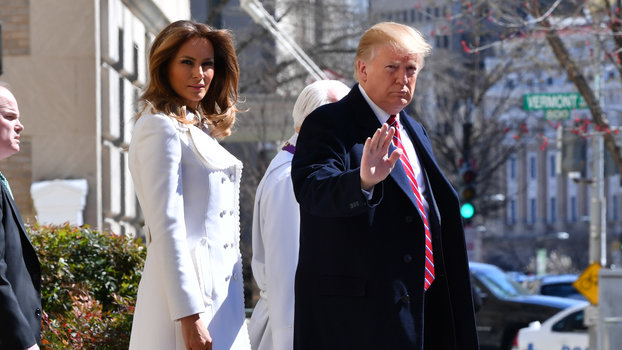 Contrary to beliefs that President Donald Trump and first lady Melania Trump are merely two ships passing in the night, a new book states that the two actually spend a lot of time together, especially when they’re having meals. CNN reports that Mar-a-Lago: Inside the Gates of Power at Donald Trump’s Presidential Palace, a new book by Laurence Leamer, chronicles hours-long dinners together during their frequent trips to Florida.

“They’re there so long, other people are leaving and they’re just … there. They dine for hours,” Leamer said of the first couple’s dining habits. “He likes a small table, a four-person table, so people can come over to say ‘hello’ but there’s not enough room to invite people to join.”

The book goes on to explain that the two are fixtures at Mar-a-Lago’s dining venues, taking in their long, long meals on the candle-lit patio several times during weekend getaways. They see friends and fans, naturally, but for the most part, Leamer says, they just enjoy each others’ company.

“It’s extraordinary for what a public personality Trump is that part of him is very private, and so is she,” Leamer said.

That may seem counter to what many see. Past reports have stated that the couple has a somewhat strained relationship, as evidenced by certain actions and fashion choices. The two also skipped out on any social media fanfare during their anniversary and Trump has made what sounded like disparaging remarks towards his wife.

Leamer’s book isn’t the first to say that things are just fine. White House staffer Cliff Sims’s book, Team of Vipers, stated that the reality of their relationship defies “the public perception of their marriage.”

These reports come together to tell a completely different story about the president and Melania. There’s even someone from the White House confirming that the pair have some quality time over dinner. The Trump administration is nothing if not mysterious.

“Those two will go and sit at dinner, and they are in the most in-depth conversations and will talk and sit there for hours, literally,” a White House official told CNN.