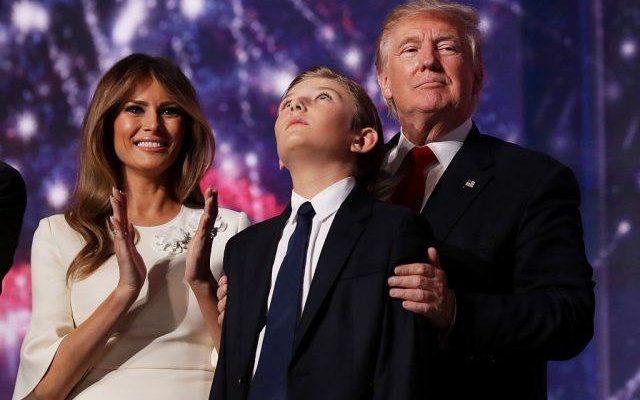 Donald Trump has a very public relationship with three of his children: Donald Jr., Eric, and Ivanka. He has another daughter, Tiffany, from his marriage to Marla Maples. But his youngest son, Barron, is the only child who lives with him. However, his father-son relationship with Barron isn’t nearly as public as his other children, which begs the question: How close are these two?

How close is Donald to his youngest son, Barron? | Chip Somodevilla/Getty Images

Barron Trump moved into the White House after his father

Donald officially became the president of the United States in January 2016. But that happened to be in the middle of Barron’s school year, and he was attending a private school in New York City at the time. Rather than move to the White House with his father, he opted to stay in Manhattan with his mother, Melania, and finish out the school year. Although it was understandable that the parents didn’t want to pull their son out of school halfway through the year, it means Barron likely didn’t spend much time with his father during those five months they were living apart.

In June, after Barron’s school year was over, he made the move with Melania to the White House. This meant he would need to start at a new school. On his first day, Donald was with his son as he walked into school for the first time. Donald and Melania chose to send their son to a school about 30 minutes away from the White House, in Potomac, Maryland. Past presidents have chosen to send their children to more local schools closer to the White House. Donald and Melania never explained why they chose a school much farther away, but perhaps they wanted more privacy for their son, since the Trump family was under constant scrutiny.

But Melania essentially raised him

Although Donald is present at some of Barron’s biggest moments, Melania essentially raised their son. Donald was a business man who spent a lot of time working, and Melania decided early on that she wanted to be hands-on with her son and not let nannies raise him. “[Donald] didn’t change diapers, and I am completely fine with that,” she said in a 2015 interview with Parenting. Melania considers being a mom to be her first job and the most important job, but it doesn’t appear Donald put his son before his business. However, it seems like the couple decided Melania would handle most of the day-to-day parenting, so it worked for them.

Donald values his time with Barron, which means there probably isn’t much of it

Melania said that Donald and Barron do enjoy spending time together. Donald values the days he gets to play golf with his son, who has a love for the sport just like his father. When they’re at Donald’s vacation home, Mar-a-Lago, Melania told Parenting that the two always eat dinner together and the three of them enjoy family time. While it seems like Donald does care about his youngest son, it doesn’t seem like he has the most hands-on approach to parenting and tends to put his career obligations first. But each family has their own way of running things — hopefully Barron will spend more father-son time with his dad as he grows up.