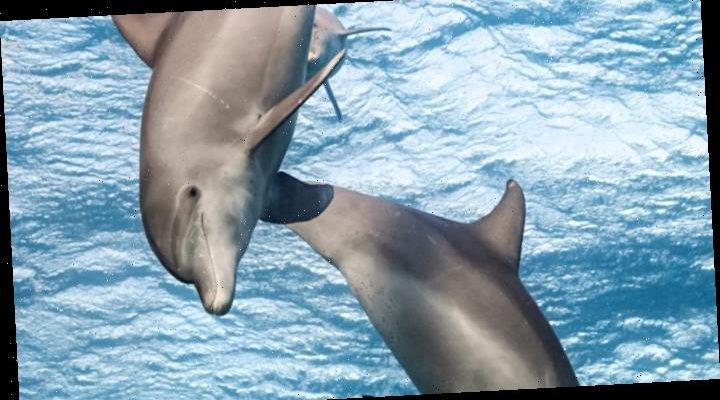 Out of the vast universe of nature documentaries, I don’t think I’m alone in finding films about life under the sea to occupy a special place. The very fact that they exist, of course, is amazing — though when you watch one, part of the wonder is that you’re not thinking about how aquamarine filmmakers actually hovered in the ocean depths to shoot this stuff. Jacques Cousteau, the pioneer of the genre, liked to place himself at the center of things, but the creators of “Dolphin Reef,” a Disneynature doc that drops on Disney Plus on April 3, simply get out of the way and let the ancient creatures of the sea seduce us with their surreal evolutionary form-follows-function wild splendor.

Shot around an idyllic chain of small Polynesian islands, “Dolphin Reef” does indeed trace the rituals, movements, and sheer shining beauty of a pod of bottlenose Pacific dolphins. The movie opens with images of dolphins leaping and flying, riding the waves like surfers, and slicing through the water, the sun glinting in pinpoints of light through the ceiling of the sea. It then builds a true-life adventure out of the gentle tale of Echo, a wayward three-year-old who is having a bit of trouble separating from his mother, Kumu.

But if the dolphin element is the marquee attraction of “Dolphin Reef,” it’s the reef part that elevates the 77-minute film into a puckish, bedazzling, and memorable entry in the Disney nature canon. Most of the movie isn’t even about dolphins. It’s about the majestic, eye-popping, and fabuloulsy intertconnected ecosystem that lends life under the sea its mysterious spiky sensual grandeur. Narrated by Natalie Portman in tones of lightly spirited curiosity, “Dolphin Reef” casts the spell of an alien spectacular (have you ever seen a peacock mantis shrimp? It seems to fuse a lobster, a monarch butterfly caterpillar, and the jutting mechanical eyes of Wall-E), a midnight horror movie, and a vision of primitive life as psychedelically gorgeous as anything by Warhol or Dalí.

Life on the bottom of the ocean is both of this world and out of this world, and “Dolphin Reef,” with its deep-focus digital images, presents a seductive vision of how the parts all fit together. The foundational element is, of course, the coral reefs, those willowy invertebrates that seem like plants (but aren’t). On top of them are the sea flora, which would smother the coral if left to grow unchecked, and so there are the “gardeners” — the fish and turtles that eat plants, though it they were left unchecked they’d strip the coral and knock the system out of balance, which is where the predators come in, like the sharks, but also the dolphins, who play the same role sharks do in the food chain.

The filmmakers, led by director Keith Scholey, record a battle between a peacock mantis shrimp and a crab, and it’s a real thriller, since the mantis shrimp has the fastest, most bullet-like predatory strike of any sea creature — according to the film, a human with the equivalent strike would be punching through steel. I’m not sure if we needed Portman coloring in the fight with “You want some maw, pal?” and “Stay off my lawn,” but that’s the Disney touch (it provides a certain nostalgic comfort). Even more predatory, and absolutely astonishing, is the broadclub cuttlefish, which looks like a giant squid crossed with Barney and has skin that literally flashes like a strobe light, its oversize tentacles opening up in front so that it can suck in its prey in like a vacuum cleaner.

There’s also a great sequence devoted to the bumphead parrotfish, which resembles an 18th-century British innkeeper played by Timothy Spall. They are, Portman informs us, “the single most important creatures when it comes to protecting the health of the reef,” because they eat the old dead coral, allowing the fresh coral to grow and thrive. The dead coral comes out of them as “sand poop” (kid will cherish this miracle of excretory alchemy), and just one of the medium-size fish can produce five tons of it a year.

The “story” told by “Dolphin Reef” is so basic that we can believe most of it happened, because it’s really just about Echo sticking too close to Kumu, then wandering off from his pod, then returning, until the moment of truth arrives when he must learn to find food on his own. The film contrasts this mother-and-child saga with that of a 40-foot humpback whale, named Moraia, and her offspring. It’s up to Moraia, sending out whale sounds for miles, to attract a male protector, which she does (an entire fleet of rivals, in fact). But which of them will win a place at her side by fending off the deadly orcas?

Since it’s part of the mythology of dolphins that they possess extraordinary intelligence, it may surprise you to discover that “Dolphin Reef” makes no special point of their singular sensitivities. At times that quality is right there in front of us, as when we witness their ritual of gliding through gorgonian coral as a kind of massage, but also to keep their cuts and bites from getting infected. It’s their day at the spa (and no, that deadly metaphor is not read by Natalie Portman; it’s my own — watching this stuff is contagious). Speaking of spas, the bumphead parrotfish consume so much coral that their huge teeth wind up a mess, so it’s part of the system that hundreds of tiny wrasse line up to clean them, swimming around right inside their mouths. (The unwritten rule is: No eating the help.)

Eating is everything under the sea, which is why Echo’s odyssey to becoming a food captor is so vital. And when he eventually makes the leap, it’s surprisingly emotional. Kumu demonstrates to him her technique for trapping fish, swimming in a 30-foot perfect circle to stir up a giant ring of mud. When Echo succeeds in making his own circle, you will cry a tear of joy as surely as if your own kid had just scored a soccer goal. That, too, is the Disney touch, and it’s not always a totally artful thing. But in “Dolphin Reef,” it’s touching and true.