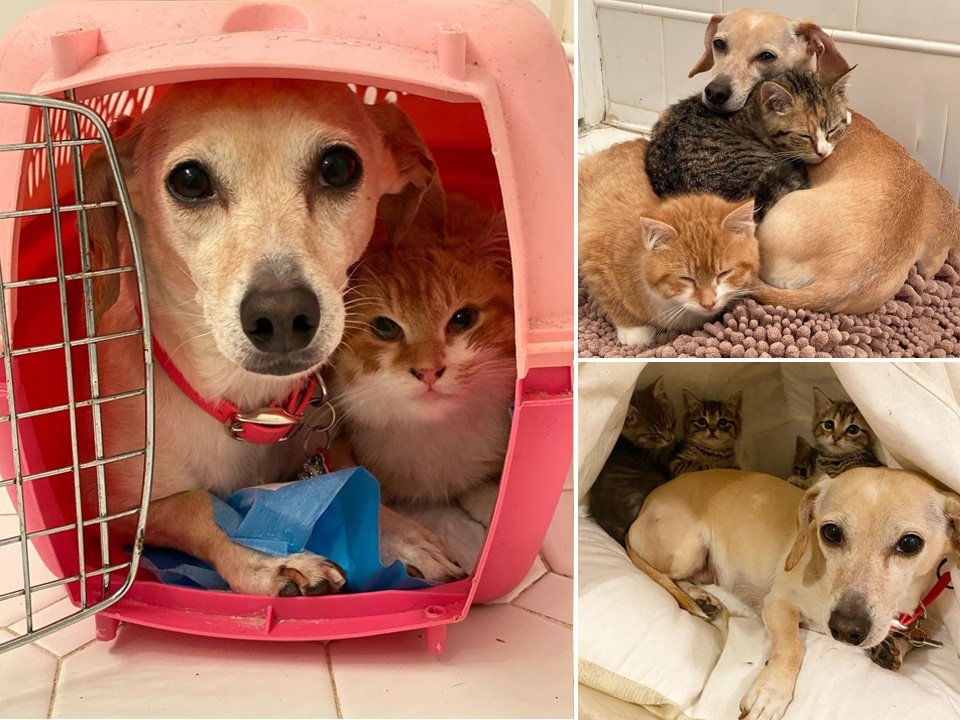 Kona, an eight-year-old dachshund mix, has helped her owner care for dozens of foster kittens.

Asa Shibuya, from New York, has fostered over 164 animals in her time, having originally taken Kona in as a foster in 2016 and adopted her poodle Peeby in 2014.

Asa was fostering her first kitten the day she brought Kona home and at first, she wasn’t sure how the dog would get on with the baby cats.

It turns out she had nothing to worry about, because darling angel Kona has a habit of taking the kittens into her care.

The little dog cuddles, grooms and plays with them while keeping careful watch over the youngest ones.

‘Kona has loved kittens from day one,’ Asa, who works as a business analyst and posts as @shibuyarollcall on Instagram, said.

‘I was actually fostering my first ever foster kitten when I first brought Kona home as a foster.

‘I was a bit nervous initially of how she would react; with her being a dachshund mix, I was a bit worried that she might have some prey instinct.

‘Boy was I wrong! She fell immediately in love with the kitten and started playing with her.

‘From then on, she’d play with every foster kitten I brought home, groom them, and with the more recent ones she started to act more like a mother to them.’

Asa added: ‘I was fostering a lot of kittens and puppies back then, so I must’ve had 10 to 15 fosters come and go while Kona was with us.

‘Kona loved the babies and took on such a motherly role with them by playing with them, grooming them, comforting them.

‘She helped me out a lot by keeping them entertained and allowing me some extra time to rest from foster mom duties.

‘She also bonded so well with Peeby and fit in so well into our home and lifestyle that I ultimately decided to foster fail [an affectionate term used to describe when a foster pet parent permanently adopts the dog or cat] on her in May 2016.’

Asa said Kona played a vital role in helping the scared and stressed kittens warm up to their new environment.

She said: ‘I fostered two kittens, Chester and Blair, who were both found in the same backyard in NYC, and the rescue was able to trap Blair first, and then Chester a week later.

‘Blair came to my home a day after Christmas, and then Chester came the day after.

‘I knew the two kittens would need help socialising as the rescue centre had told me that upfront.

‘Since I’ve had experience socialising kittens before and also because I have mama Kona with me who somehow has magical powers, I was so excited to bring them home.

‘They came to me very timid and scared; I first started them off in the bathroom, so they wouldn’t have space to run away and hide from me.

‘On their very first day with us, I was sitting in the bathroom with them with Kona sitting on my lap as they were cowered in the back hiding from me.

‘Then Kona got off my lap to go sit on the rug, and then Blair came up to her, started purring, and started trying to nurse on Kona.

‘I was honestly kind of in shock, also given that she was already eight or so weeks old when she came to us.

‘Kona was so happy though, she just laid down and let Blair try to nurse on her.

‘Chester wouldn’t nurse on Kona but he also very quickly opened up to her.

‘For the next few days, Kona and I would hang out in the bathroom with them, and the kittens would play with Kona and sleep with her, it was the cutest thing ever!’

Sweet Kona can ‘sense’ when the kittens are scared and knows exactly what to do to help them get used to their foster home.

‘If she senses that the kitten is scared, she’ll approach them very calmly and just sit there with them as they decompress.

‘If she senses that they’re playful, she’ll play with them.

‘She loves grooming them all, and she’s carried some of the smaller babies around to bring them to her “nesting spot” (like the dog bed under my bed) to groom them and nap with them.’

Kona isn’t the only one of Asa’s pets who has taken to caring for the kittens – Yuzu, 7, who was adopted in October 2016, has lent a hand too.

‘We also had a feral foster kitten while we were fostering Yuzu, and she played a huge role in helping the kitten adjust,’ Asa said.

‘It did take the kitten a few months before she started to open up to humans, but I’m pretty certain she would’ve taken even longer if it weren’t for Yuzu nurturing her and essentially being there for her.’

Of them all, Kona has been the most helpful when it comes to the foster kittens.

‘Kona’s the most loyal dog, and she’s glued to me at the hip,’ Asa said.

‘With that said though, she’s also amazing with my other pets.

‘The other three Peeby, Mikan and Yuzu are a bit more independent so Kona’s the bond that keeps the family together.’