Blame it on all the food I ate during Thanksgiving or the hours of traveling I endured to see my loved ones, but I am sick, y’all. Aches, pains, nausea, congestion — you name it, I’ve probably been feeling it these past few days. IMO, the worst part about being sick is when your sinuses are so clogged that you can’t even fall asleep when you lie down at night. Maybe your parents have nagged you try that weird remedy where you tip a teapot full of water into your nose, but do neti pots actually work? Because, TBH, that thing looks so awkward to use — but hey, I’d be willing to try it if it actually allows me to breathe again.

In case you aren’t familiar with any of this, let me catch you up: A neti pot is basically a teapot that, if you ask me, is shaped a little like Genie’s lamp in Aladdin — but I digress. Anyway, the long spout of a neti pot is used to pour salt water into one nostril, which will then flow out of the other nostril, and the idea is that this will help flush out your nasal passages and relieve congestion, according to the Mayo Clinic.

"The benefit of saline is the removal of mucus and inflammatory products in the nose and only true ‘irrigation’ brings this about — thus simple [nose] sprays and inhalations are ineffective," Dr. Richard Harvey, a professor of rhinology at Macquarie University, told CNN.

In other words, if humidifiers and nasal sprays have failed you and your congestion thus far, a neti pot might be the next best remedy to help relieve your stuffiness. 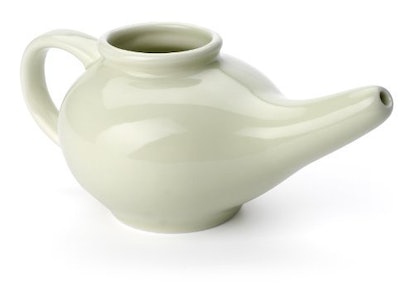 According to Everyday Health, a neti pot can actually help with a variety of things, from clearing your nostrils and soothing dryness, to even reducing your snoring. But it’s all about the technique, my friend. To use a neti pot, the outlet says you should insert the long spout into one nostril, tilt your head to the side, then "allow the saline solution to flow up the nasal passage and then out the other nostril."

But not just any old water will do. The FDA cautions against using tap water in your neti pot, explaining that it isn’t filtered enough to make it safe for use in your nasal passages. This isn’t something to be taken lightly, as the FDA says that passing unfiltered water into your nose is less safe than actually drinking it, since your nose doesn’t contain the stomach acids necessary to kill harmful bacteria. Instead, the FDA explains, these organisms can cause severe or even fatal infections.

To make sure your neti pot is safe to use, the FDA recommends filling it with distilled, filtered water, or even just water that you boil at home for three to five minutes (of course, let it cool down before pouring it into your nose). 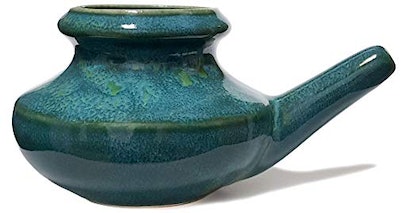 The benefits of using a neti pot (aka nasal irrigation) seem to be strongest for people who have chronic sinus issues, particularly when the method is done over a long period of time, according to a study published in the Canadian Medical Association Journal (CMAJ). The study surveyed nearly 900 British adults with a history of chronic or recurring sinus problems about nasal irrigation to learn more about how effective the practice actually is, and the researchers found that, when the participants used a neti pot for months at a time, they experienced significant improvements in their congestion.

In other words, flushing out your nasal passages just once when you’re feeling stuffy may not make too much of a difference, but if you’re stuck with a clogged nose all winter long, you might want to keep a neti pot in the cabinet to use on a more regular basis. Just make sure you boil the water beforehand — and don’t forget to let it cool before you pour anything on or near your face.