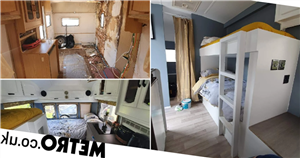 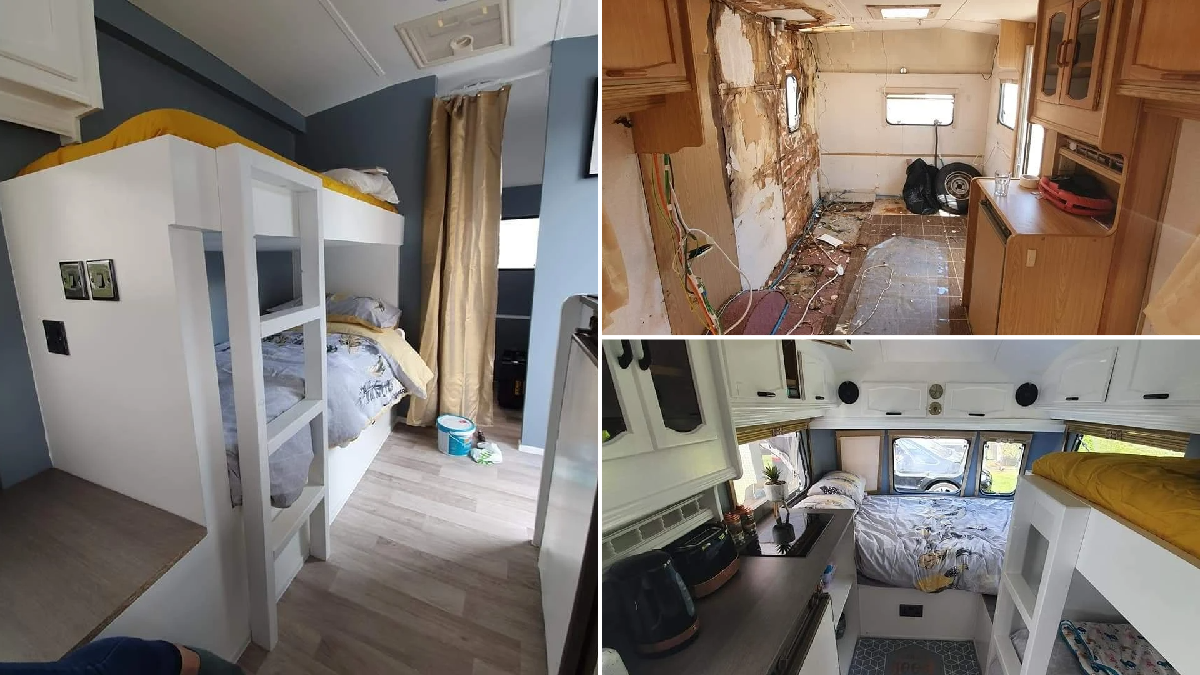 There’s nothing better than giving a new lease of live to a space that was previously run down – particularly if you get good use out of it too.

This is exactly was dad Matthew Daniell did when he transformed a tired old caravan to create a perfect holiday travel home for him and his family.

Matthew, 28, from Doncaster, was given an old caravan that was ‘falling apart’ by a family member – and set about turning it into a stylish living space.

The painter and decorator estimates the project would have cost at least £4,000 to get done professionally – but he managed to pull it off for £2,000 using budget local and ebay buys.

Matthew, a dad of two and stepdad of four, says: ‘We had a Spain holiday cancelled twice, so we used the money from that and decided to use that money for a staycation.

‘I was always on caravan holidays when I was a kid so I thought it would be a great idea to renovate one. I got the caravan during the first lockdown.

‘We got it given to us for free from a family member as it was old and no good in the state it was in.

‘We wanted to do it to make it feel better when staying there as the state it was in wasn’t nice – it was falling apart.’

Matthew says they came up with the idea of turning it from a two-berth to a four-berth to accommodate the family’s needs.

‘My partner couldn’t see how I would do it but I had it all worked out in my head,’ Matthew told money-saving community LatestDeals.co.uk.

‘I completely stripped the caravan back to a shell on the rear end and just left the top half of the front end in place.

‘We came across the damp areas behind where the old shower used to be, so we stripped that all out and fixed it all with new batten and new ply for the walls. We started at the front and worked back.’

Matthew then fixed the double bed. He got the measurements for a UK small double mattress and built the base out of CLS timbers and 9mm plasterboard.

‘For the bunk beds, we used the old foam from the sofa, from which the old fabrics were taken off, cleaned and cut to a size for a small single bed which is perfect for camping,’ he says.

‘The frame again was made out of CLS timbers and plasterboard. Then we got to the shower area. I ordered a caravan shower tray and an instant hot water shower from ebay.

‘For the walls, I used vinyl floor tiles and stuck them on using a contact adhesive.’

Matthew applied three coats of yacht varnish to seal the tiles from the water, added silicone all around the edges and installed a new waste pipe and water feed.

‘I also installed a new water diagram pump to feed the water from the onboard tank,’ he adds.

‘I then installed a small plastic caravan sink purchased from ebay.

‘For the flooring, we just got some cheap lino from a local flooring shop and laid that throughout.

‘For the kitchen area, I used the original fridge as it was in full working order and just needed a good clean. For the hob, I got a small electrical hob from ebay on a standard UK plug to plug in as and when we need to.’

For the worktops and shelf, Matthew used wardrobe end panels purchased from B&Q as they are cheaper than your standard worktops.

‘We fitted all new sockets, a new leisure battery and new 12v LED lighting purchased from ebay too,’ he adds.

Matthew is thrilled with the outcome of his project, and says his family are loving their new caravan.

‘Since we have started to use the caravan, we have made friends and the younger kids absolutely love it there,’ he says.

‘The 10-year-old has made friends on-site and from the minute we pull up she’s gone with her friends.’