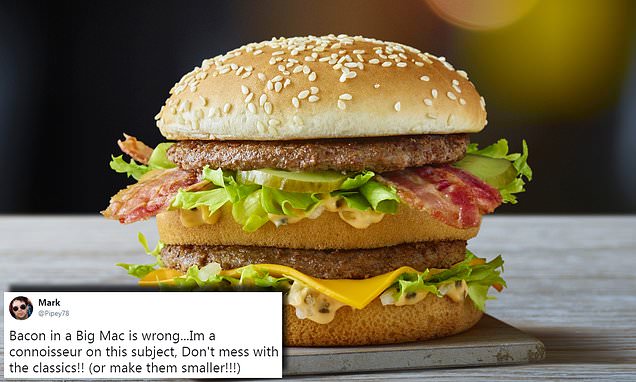 ‘Don’t mess with the original!’ Diners describe the new bacon Big Mac as an ‘abomination’ ahead of its release this week – but others can’t wait to try the twist on the McDonald’s classic

This week sees McDonald’s introduce a twist on one of its best-loved classics, the Big Mac.

From Wednesday diners can pick up the burger in a regular, grand or Jr size with the addition of bacon for the first time in the UK.

And while some can’t wait to get their hands on the new twist, some purists have taken to Twitter describing the alteration as an ‘abomination’ with many arguing that the original should not be tampered with.

One aeriated fan wrote: ‘Bacon in a Big Mac is wrong…I’m a connoisseur on the subject, don’t mess with the classics!!’ 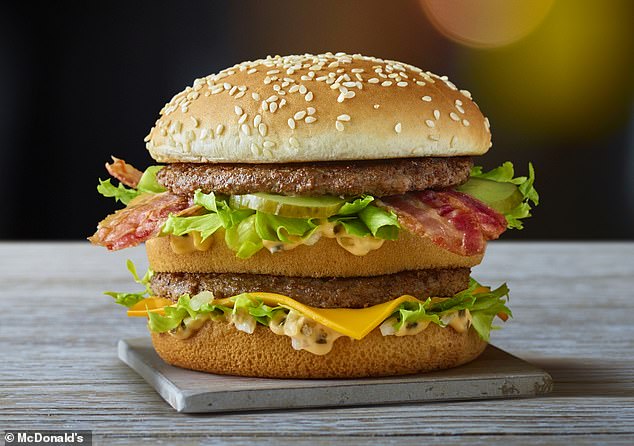 He went on to complain that the chain should also avoid making them smaller, referring to the Mac Jr.

A third wrote: ‘Bacon does NOT belong in a Big Mac.’

But while there was a fair backlash in response to the new menu item, there were equally as many looking forward to the smoky extra.

One tweeted: ‘Bacon on a Big Mac might actually be dope though.’

However, Big Mac purists have described the addition as an ‘abomination’ claiming that bacon ‘does not belong’ on the burger

Another joked: ‘I really thought this year was going to be my year for sticking 100% to my nutrition. & then I just found out they’ve added bacon to the Big Mac.

‘God has a magnifying glass on me, I just know it (sic).’

A third wrote: ‘rumour has it McDonald’s are starting a Big Mac with bacon soon and I need it like yesterday. 2 of my favourite foods combined (sic).’

This is the first time the iconic Big Mac has been changed in the UK since the burger’s creation in 1968. 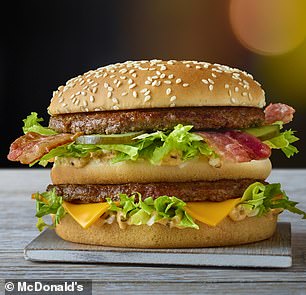 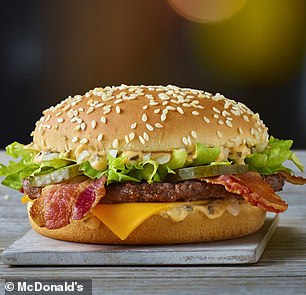 But there were equally as many exciteable customers, who can’t wait to get their hands on the new edition

The Grand Big Mac and Mac Jr. are back by popular demand, and it’s the first time the burgers have returned following their initial sell-out launch in January 2018.

The Big Mac Bacon, Grand Big Mac Bacon and Mac Jr. Bacon are available in restaurants nationwide for a limited time only until the 19th of March.

For those who are adamant to avoid bacon, all three burgers will also be available in their classic style during this time.

Michelle Graham-Clare, Head of Marketing at McDonald’s UK&I, said: ‘The customer reaction to our Grand Big Mac and Mac Jr. last year was phenomenal, the love for the iconic Big Mac surpassed all expectations.

‘Which is why I am delighted to introduce bacon to the Big Mac range, a twist on a classic.’