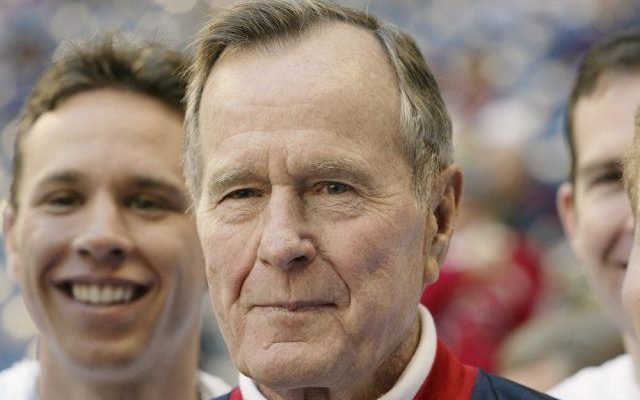 George Herbert Walker Bush died on November 30, 2018, at the age of 94, The New York Times reports. The former president‘s death comes shortly after his beloved wife’s passing in April at age 92, according to CNN. The couple was married 73 years.

The nation mourns Bush’s passing. Barack Obama issued a statement and tweet, “America has lost a patriot and humble servant in George Herbert Walker Bush. While our hearts are heavy today, they are also filled with gratitude. Our thoughts are with the entire Bush family tonight – and all who were inspired by George and Barbara’s example.” Additionally, son Jeb’s heartbreaking tweet simply said, “I already miss the greatest human being that I will ever know. Love you Dad!”

Quickly upon Bush’s passing, President Donald Trump tweeted and issued a statement as well. “President George H.W. Bush led a long, successful and beautiful life. Whenever I was with him I saw his absolute joy for life and true pride in his family. His accomplishments were great from beginning to end. He was a truly wonderful man and will be missed by all!” Trump was quick to lower the flag at the White House, plus very giving with kind words. He wasn’t however as generous with another fallen, fellow Republican, Sen. John McCain. How has Trump’s reaction to Bush’s death been different than McCain’s? And did Bush like Trump?

Trump issued a statement about Bush’s death almost immediately following the former president’s passing. The statement was well crafted and thoughtful. However, Trump dragged his feet when it came to issuing a statement about McCain, CNN reports. In fact, White House aids wrote a statement for Trump but it was never issued. Meanwhile, Trump spent the day golfing while the nation mourned.

Senior aids advised Trump to release a statement that included praise about McCain’s service, but he refused. He did, however, post a very brief tweet. “My deepest sympathies and respect go out to the family of Senator John McCain. Our hearts and prayers are with you!” Trump eventually issued a statement two weeks later.

Upon Bush’s death, the White House flag was lowered to half-staff immediately. However, when it came to McCain’s passing, Trump lowered and raised (and then again lowered) the flag. The White House flag was initially lowered upon McCain’s passing but was “then raised back following the minimum period under law,” Reuters reports. Trump received significant backlash and criticism for this maneuver. The flag was again lowered a few days later. Reuters notes Trump also dragged his feet issuing a proclamation for flags to stay at half-staff for longer than the two-day minimum amount of time.

It is no secret McCain and Trump had a contentious relationship. Trump set the tone for the relationship he would have with McCain with the statement, “He’s not a war hero. He’s a war hero because he was captured. I like people who weren’t captured,” The New York Times reports. Additionally, Trump’s remarks about how he treats women and immigration went against what McCain’s values. “Donald Trump’s behavior make(s) it impossible to continue to offer even conditional support for his candidacy,” McCain said about Trump’s treatment of women, BBC News reports. McCain also famously rejected Trump’s run at dismantling Obamacare.

The Bush family did not have a friendly relationship with Trump either. Trump continuously attacked Bush’s son Jeb’s run for the presidency. Plus, the men had different values. Trump recently said at a rally in Montana, “What the hell was that, by the way, thousand points of light? What did that mean? Does anyone know? I know one thing: Make America Great Again, we understand. Putting America first, we understand. Thousand points of light, I never quite got that one,” Newsweek reports.

Plus, Bush wasn’t a Trump fan either. “I don’t like him. I don’t know much about him, but I know he’s a blowhard. And I’m not too excited about him being a leader,” Bush told The New York Times.