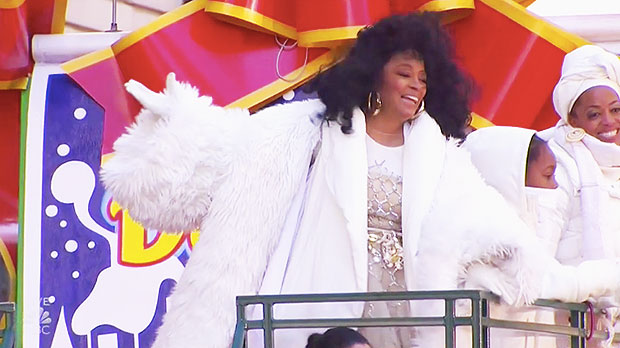 Diana Ross turned up the volume at the Macy’s Thanksgiving Day Parade as our disco queen hit all those high notes and more! Watch her bring holiday cheer and nostalgia to New York City on Nov. 22.

As the crowd at Macy’s Thanksgiving Day Parade braced New York City’s low 20s temperature, Diana Ross, 74, warmed the audience with her soulful vocals! The queen of ballads performed “Simply Having A Wonderful Christmas Time” on top of the Hallmark Channel’s Heartwarming Holiday Countdown float. Diana’s presence was extra touching since her family members Rhonda, Tracee Ellis, Chudney, Ross and Evan with wife Ashlee Simpson-Ross joined her on the float! After today’s performance, it’s evident that Diana still has that special touch that won her the Grammy Lifetime Achievement Award. And she should be honored with another trophy for not cutting her vocal cords slack during what was NYC’s coldest Thanksgiving Day since 1901, according to The New York Times.

But the frigid air wasn’t the only thing that sent chills running down the audience’s spines! A slew of music icons joined Ms. Ross in the parade’s amazing lineup, which included Kelly Clarkson, Anika Noni Rose and John Legend. There are 26 floats in total, so stay tuned for HollywoodLife’s coverage of this annual event. We especially loved the performances from country superstar Kane Brown, who performed “Good As You,” and pop princess Ally Brooke, who sung “Last Christmas.”

This year’s Broadway lineup is just as good as the list of solo artists. We mean, the theater cast of Mean Girls was there to add sass to the holiday spirit, for goodness’ sake! Fans lost is after seeing Dove Cameron bring their beloved Cher Horowitz back to life, and we’re living for this literal parade of nostalgia.

Whew, only Diana can get us emotional right before we gorge on third helpings of mashed potatoes and turkey. What else do you expect from the songstress who blessed us with classics like “I’m Coming Up” and “Ain’t No Mountain High Enough”?