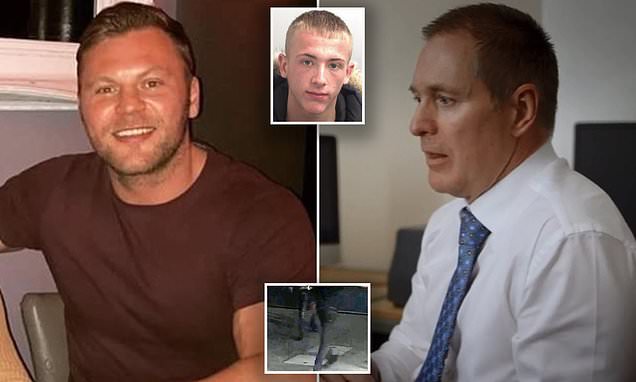 A police officer has described the ‘gotcha’ moment that led to a teenage murderer being convicted of shooting dead an electrician in a petrol station forecourt.

John Pordage, 34, was fatally wounded by Bradley Blundell, then 17, in an altercation at a BP garage in Chelmsford, Essex, in August 2017, after he and a friend stopped off to buy cigarettes.

Documentary Killer Kid: The Murder of John Pordage, which aired last night on 5Star, examined the lengthy process that led to Blundell being convicted – including a 15-year-old boy being put on trial for the murder and Blundell absconding to Europe.

Speaking on the show, lead investigator DCI Martin Passmore revealed how a single frame of CCTV footage was used to contradict a statement given by a witness, and later Blundell, in a moment that proved crucial for the prosecution’s case. 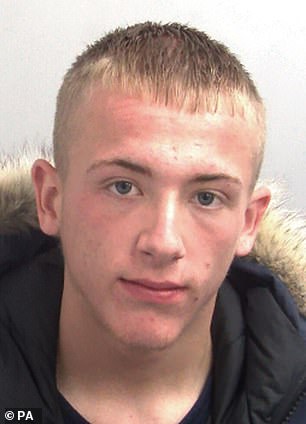 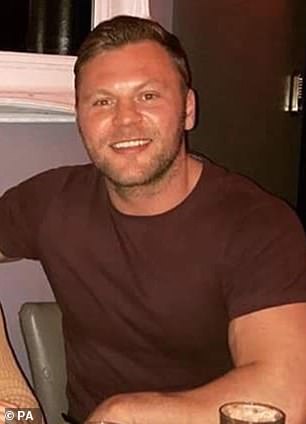 Bradley Blundell, left, fatally shot John Pordage, 34, right, in the early hours of August 5 2017 at a BP garage in Essex. He was handed a life sentence with a minimum of 22 years 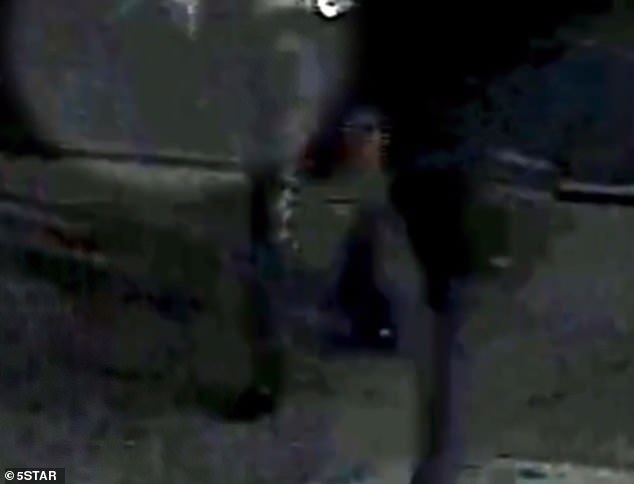 DCI Martin Passmore revealed how this single frame of CCTV footage was used to contradict a statement given by a witness, and later Blundell, in a moment that proved crucial for the prosecution. The frame shows Blundell with an empty right hand (seen blurred at the top of the frame), meaning he did not carry the cosh and might have carried the murder weapon

Witness Jamal Samuels, a friend of Mr Pordage, claimed Blundell, or the ‘blond boy’ had been carrying a cosh – or heavy bar – that was used to strike Mr Pordage.

Blundell’s 15-year-old brunette friend, who cannot be named for legal reasons, was also at the scene.

Police feared Blundell and his lawyers would try to seize upon Mr Samuels’ statement at trial, using it as a means to undermine the prosecution’s case.

As DCI Passmore explained in the documentary: ‘It is vital that Blundell convince this jury that he had been passed this cosh [and] it was the juvenile who pulled the trigger.’

The police officer recounted how CCTV footage from the night was played for the jury at Woolwich Crown Court as the prosecutor grilled Blundell on how the incident unfolded.

‘As we go through the CCTV, we are asking Blundell to explain to us at what point was he passed the cosh,’ DCI Passmore said. ‘”Tell us, Bradley, when it was that you were passed the cosh”. 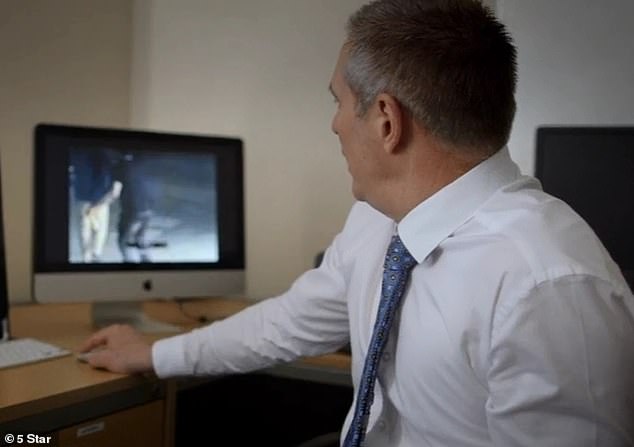 DCI Passmore recounted how CCTV footage from the night was played for the jury at Woolwich Crown Court as the prosecutor grilled Blundell on how the incident unfolded. Pictured, the police officer looked through the CCTV footage on the documentary

Blundell claimed the cosh did not leave his right hand. ‘”It stays in my right hand all the time”,’ Passmore recalled Blundell saying.

‘[But] there’s one frame where we can see Bradley Blundell’s right hand… and there’s nothing in it.’

DCI Passmore continued: ‘At that point in that trial a real depth of atmosphere suddenly came over the whole courtroom and even Blundell himself must have thought “I’ve been caught out”.’

The victim’s mother Sue Wilson added: ‘You could see the change in Blundell, he knew. He knew that there was no way out of that. I thought: “what if the jury don’t see all that?”‘ 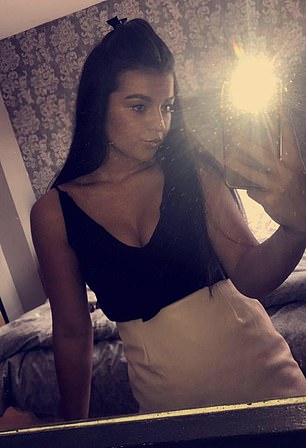 Blundell was with friend Ella Colgate, 18, shortly before the murder. It was heard Mr Pordage told Colgate she had a ‘nice bum’, in a remark that sparked the fatal altercation

DCI Passmore’s excitement turned to nerves when he recalled the moment when he had to wait for the jury’s verdict.

He said: ‘That split second when the jury are asked “do you find the defendant guilty or not guilty?”… ‘And then you hear it. “Guilty”. And then the whole place quite understandably erupted.’

‘It was just a relief,’ said Ms Wilson, adding: ‘But how long would he get?’

Blundell was found guilty of murder in December 2018 and ordered to serve a life sentence with a minimum of 22 years.

The documentary retold the facts of the case, starting with the night Pordage was killed.

It was heard how Blundell, together with friends Ella Colgate, 18, Saul Stanley, then 18, and a then 15-year-old boy who cannot be named for legal reasons, had pulled into the petrol station to fill up Colgate’s car.

Mr Pordage and his friend Jamal Samuels were already parked in the forecourt and Colgate exchanged words with the men while refuelling her car.

Tracy Ayling QC, prosecuting, said one of the men shouted ‘nice bum’, as they went to buy cigarettes at the garage’s kiosk, sparking the deadly shooting. 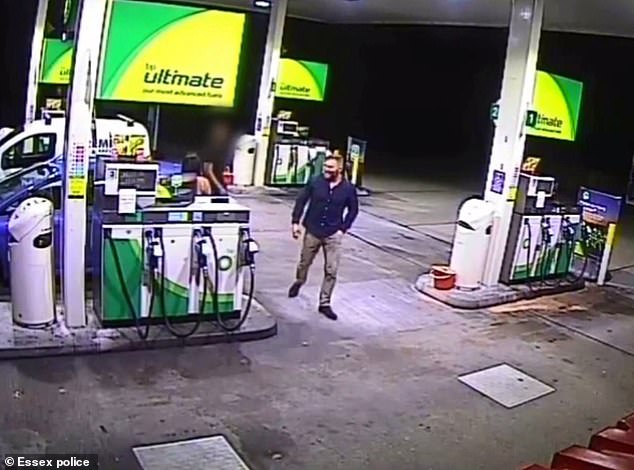 Blundell was immediately a suspect however he absconded to Europe, leaving police no choice but to focus on the remaining suspects.

A lengthy police investigation led to the 15-year-old being accused of murder. His trial began in January 2018 but he was cleared by a jury at Chelmsford Crown Court.

The teenager had already admitted to one count of perverting the course of justice and one count of handling stolen goods.

He was sentenced in March 2018 to a 12-month community order and 40 hours of unpaid work.

Saul Stanley, 20, was convicted in January 2018 of two counts of possession of a prohibited firearm, one count of possession of ammunition without a certificate and perverting the course of justice. He was jailed for five years in March 2018.

Ella Colgate, 19, was convicted of conspiracy to pervert the course of justice in December 2018 and jailed for 12 months in January this year. 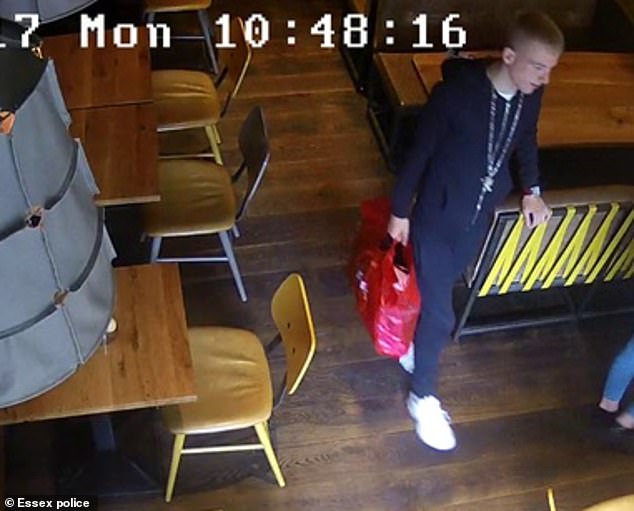 Blundell was immediately a suspect however he absconded to Europe, leaving police no choice but to focus on the remaining suspects. Pictured, Blundell in CCTV footage on the run

On March 31 2018, seven months after Mr Pordage’s murder, Blundell handed himself into police in Amsterdam and he was extradited to the UK.

This meant Mr Pordage’s family – and the police – had to prepare for a second murder trial.

A prosecutor described Blundell as a ‘sophisticated criminal’ based on his behaviour after the crime in burning his clothes and fleeing to Europe.

He was sentenced to a life sentence with a minimum of 22 years and a further six years for a string of other offences, to run concurrently.

Ms Wilson continued: ‘He didn’t seem that bothered, I thought “you’ve just showed yourself up”.’

Mark Jones, a friend of Mr Pordage since they were nine-years-old, said: ‘For him to smile and laugh when you’re given a sentence for 22 years. What sort of a person is that?’

Mother Sue added that her life would never be the same despite her relief in getting a guilty verdict.