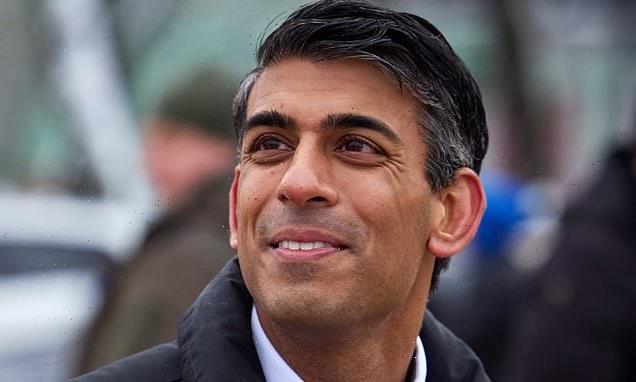 The Westminster bubble was abuzz yesterday with rumours that the Government is putting out feelers to the EU to renegotiate the deal agreed by Boris Johnson only three years ago.

The idea, apparently, is to create a ‘Swiss-style relationship’ with Brussels: removing trade barriers and giving Britain access to the Single Market.

To the Remainer-dominated Whitehall establishment, the Swiss model may sound as enviable as a Geneva-made Patek Philippe watch. But as a blueprint for Britain’s future relations with Brussels, the plan is — like Swiss cheese — full of holes.

In the first place, Switzerland allows freedom of movement for EU citizens. For the UK, that would mean giving up control of our borders. British employees would once again be undercut by cheap labour from Europe.

Second, the Swiss — thanks to a series of bilateral agreements with Brussels over decades — abide by a multitude of EU laws and regulations, which means also accepting the jurisdiction of the EU Court of Justice in Luxembourg — and making contributions to the EU budget. 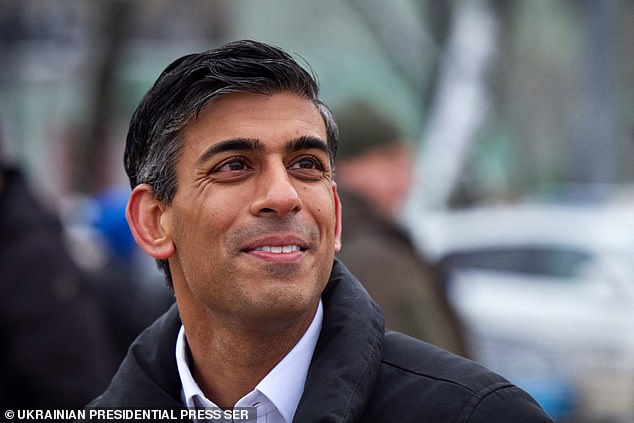 The Westminster bubble was abuzz yesterday with rumours that the Government is putting out feelers to the EU to renegotiate the deal agreed by Boris Johnson only three years ago (Pictured: Prime Minister Rishi Sunak yesterday visiting Kyiv, Ukraine)

The right to make our own laws, without meddling by foreign bureaucrats and courts, was a key element of Brexit. Do we really want to turn the clock back to a time when Britain was a rule-taker, not a rule-maker?

As for the notion that people would be happy to return to the days when Britain was sending almost £200 million to Brussels every week: the PM must realise it’s madness. Has he forgotten that his Chancellor has only just imposed the most draconian fiscal package in a generation?

The country has endured austerity, a pandemic and the energy crisis, for the most part without complaining. But Leavers will not stand for handing over a penny of our hard-earned taxes to EU president Ursula von der Leyen and her fellow Eurocrats.

Nor will the great majority of Conservative MPs, all of whom were elected on a manifesto that promised to end freedom of movement, EU budget payments and laws and regulations framed in Brussels. Many would refuse to vote for a Swiss-style soft Brexit in the Commons, even if that meant an early general election.

For the managerial mandarins of the metropolitan elite, everything is open to compromise, but for true Brexiteers these are points of principle. Lord Frost, the former Brexit negotiator, has already condemned the Swiss approach as ‘quite unacceptable’.

Indeed, the scale of the furious reaction among Brexiteer backbenchers to the idea of a Swiss-style deal forced the Government to deny that such an arrangement was under consideration.

But it is clear the story did not emerge from thin air. Why, then, did someone close to the Prime Minister decide to fly this Swiss kite? They must have known that the Tory party and large parts of the country would react angrily.

It seems to me that it is the dire predicament of the Conservatives that has prompted this high-risk tactic. Any ‘Rishi bounce’ has long since fizzled out and the Government is lagging between 20 and 30 points behind Labour in the polls.

Only 40 per cent of the broad electoral coalition who voted for Boris Johnson in 2019 now support the Tories. For many of these voters, last week’s Autumn Statement may be the final nail in the coffin.

On the issue of Brexit, there has been a shift of opinion, too. Many who did not vote in the 2016 referendum, or were too young, now say that they regret the decision to leave. 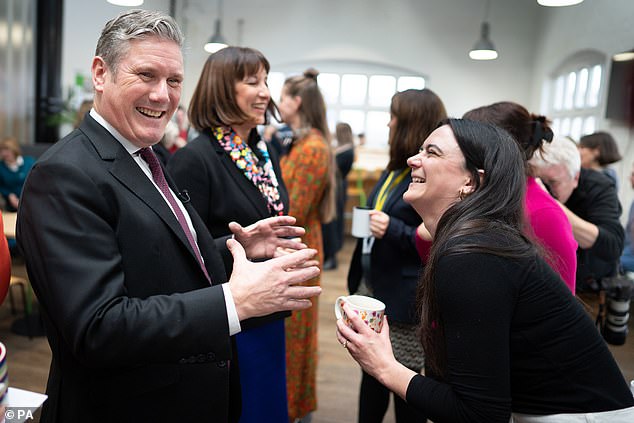 Any ‘Rishi bounce’ has long since fizzled out and the Government is lagging between 20 and 30 points behind Labour in the polls (Pictured: Labour leader Keir Starmer, left, on a visit to Swindon yesterday)

According to YouGov, one in five who voted for Brexit has changed their mind. Its latest poll shows that just 32 per cent now think it was the right decision, compared with 56 per cent who don’t.

This phenomenon, which pollsters call ‘Bregret’, has emboldened the Remainers in Whitehall and Westminster to attempt a new power grab, justified by the claim that the public is changing its mind on Europe.

The Prime Minister himself may be wobbling in the vain hope of courting popularity by cosying up to the EU. Has he been influenced by the chorus of diehard Remainers who claim that Britain has become the ‘sick man of Europe’ and advocate rejoining the Single Market as the solution to all our problems?

There may also be a personal aspect to this. As the architect of Brexit, Boris looms large in the history books, but Rishi may hope to eclipse his former boss by demonstrating that Brexit wasn’t ‘done’ properly after all.

Whatever his motivation, the Prime Minister would, in my view, be profoundly mistaken to capitulate to this wave of Brexit pessimism, from both party-political and patriotic perspectives.

It is simply wrong to suppose that the 17 million who voted Leave did so because they expected an immediate boost to the UK’s GDP.

They understood there would be a transition period lasting several years, during which the EU could follow its protectionist instincts by imposing vindictive barriers on British trade and tourism. Nonetheless, voters decided that regaining sovereignty would be well worth some short-term pain.

No one expected this upheaval to be followed first by a pandemic, leading to ballooning debt and rising global interest rates, then by a major European war, bringing with it an international energy crisis and an inflationary spiral.

Despite all this, the British economy has proved more resilient than the pessimists predicted. According to OECD figures, since 2016 the UK economy has grown faster than Germany and Italy.

The UK is now in recession — but so is the Eurozone, which has more unemployment and, in some cases, higher inflation rates. You would never know any of this from our Europhile media.

On the BBC’s The World This Weekend yesterday, presenter Shaun Ley told one businessman who was having doubts that his vote for Brexit was ‘economic suicide, wasn’t it?’. Such blatant bias is all too typical of the BBC’s coverage of the issue.

The downsides, such as long queues at airports, have been given endless coverage, while the freedoms conferred by Brexit have been downplayed. The speed of our Covid vaccine rollout, saving many thousands of lives, was only possible thanks to Brexit.

The Government has barely begun to take advantage of Brexit — for example, to strike our own trade deals with other countries, or to choose our own tax rates. Our attitude to the latter has been contrary to say the least. In the autumn statement, instead of freezing corporation tax at 19 per cent — or cutting it — the Chancellor has just raised it to a prohibitive 25 per cent.

But even after last week’s tax hikes, the UK remains less heavily taxed overall than many EU members. Do we want to move to the French model, where the state spends an eye-watering 59 per cent of GDP?

Britain’s main outstanding issue with the EU, the Northern Ireland Protocol dispute, can be resolved on a bilateral basis without going back to the drawing board on Brexit. There is no need for hard borders, with either the Republic or the mainland.

On security, Europe has been grudgingly impressed by our independent contribution to Ukraine’s war effort, on a scale second only to the U.S.

We also encouraged Sweden and Finland to join Nato — which is a far better framework for joint efforts than the EU.

Since the departure of Boris Johnson, there has been no real champion of Brexit in the Government. The Prime Minister must prove that he genuinely believes in British independence.

If loyal Conservatives sense that Rishi Sunak is backsliding on the cause closest to their hearts, it will be curtains for him, for his party and for his Government.