Australians could face days or even weeks of political limbo after the federal election, with five key cross bench MPs declaring there will be “no deals” struck with Scott Morrison or Anthony Albanese in the event of a hung parliament.

The five current independent MPs – Tasmanian Andrew Wilkie, Victorian Helen Haines, NSW’s Zali Steggall, South Australia’s Rebekha Sharkie and Queensland’s Bob Katter – spoke to The Age and The Sydney Morning Herald on the eve of the election to discuss what price they would ask for their support in the event of a hung parliament. 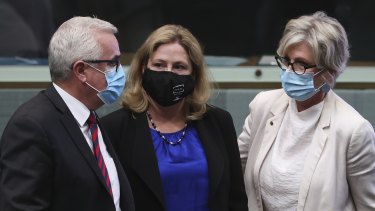 Four of the MPs said they would not strike a formal deal with either Mr Morrison or Mr Albanese to help them form government, while the mercurial Mr Katter said he could work with either man.

Labor’s primary vote in the most recent Resolve Political Monitor is at 38 per cent to the Coalition’s 34 per cent, but asked how firmly they were committed to that choice, 21 per cent of voters said they were uncommitted.

The two leaders squared up over tax on Wednesday, Mr Morrison warning a future Labor government would “let taxes rip” and have a “no limits tax policy”, a response to Labor treasury spokesman Jim Chalmers saying Labor would not be bound by the federal government’s self-imposed tax-to-GDP limit of 23.9 per cent.

This level was last reached in the final year of the Howard-Costello government and the tax-to-GDP ratio has not risen to this level under either the former Labor government or the current government.

Mr Albanese fired back saying the government had made $70 billion in spending commitments between last December’s budget update and last month’s federal budget, which was “more than all of the commitments that we have made in the three years that I’ve been leader of the Labor Party”.

Strategists from both major parties believe the election will be closer than national polling suggests, with a fiercely fought seat-by-seat battle leaving the door open to a hung parliament and minority government in which neither major party can claim a 76 seat majority.

Mr Wilkie, Ms Haines, Ms Sharkie and Ms Steggall all have greater action on climate change a federal integrity commission and political donations reforms as their priorities in the event of a hung parliament.

Ms Haines, who succeeded independent Cathy McGowan in the former Coalition seat of Indi in 2019, declared “I’m not going to be an MP who signs a written agreement and agrees to pass all legislation”.

She said neither party was ambitious enough on climate policy, neither had done enough to deliver an integrity commission and warned that in the event of a hung parliament “I will consider any policy that would be there on the table and I won’t be rushed” – recalling the lengthy 17 days crossbench MPs Rob Oakeshott and Tony Windsor took in 2010 to back Labor.

Mr Wilkie, who served in the last hung parliament between 2010 and 2013, said his seat of Clark “is a Labor-leaning electorate and it would be difficult for me to support a Morrison government – but that’s quite different to saying I would support a Labor government”.

“I’m not going to do a deal with either major party like I did with Julia Gillard in 2010,” he added. That deal with Ms Gillard collapsed after the Labor government abandoned gambling reform but Mr Wilkie said his experience with the now-opposition leader was “overwhelmingly positive”.

Ms Sharkie, who was elected in 2016, said she was mindful her seat had been blue-ribbon Liberal territory but “I’m not inclined to support either of them”.

“I have been disappointed with them on climate and a federal ICAC and on the River Murray,” she said and addressing these matters “is the minimum threshold for confidence and supply” in a hung parliament.

Mr Katter left the door open to supporting either man and had three quite different demands. First, that the recently announced $5.4 billion Hells Gate dam in north-western Queensland be built to a height of 395 metres, rather than 350 metres.

Second, to “punch a hole [tunnel] through the Great Dividing Range [near Cairns] for bugger all money, a thousand million dollars [$1bn] so we can re-populate inland Australia” and third, that the greater Mt Isa area be connected to the national electricity grid.

Asked who he would support if neither leader claimed 76 seats, Mr Katter said “I could get along extremely well with either of them. I don’t care about that, all I care about is we either populate this country or we lose it”.

Mr Katter also said Australia’s military needed “about 200,000 missiles” and that “every kid in Australia should have a rifle in the school armoury. That’s how it was for most of last century”.

Ms Steggall, who holds the former Liberal seat of Warringah – and recently indicated she would be more likely to back the Coalition if Mr Morrison was not the party leader, confirmed she would do “no deals”.

“In the event of a hung parliament, I would be true to the issues that matter to my community: climate, integrity and fiscal discipline.”