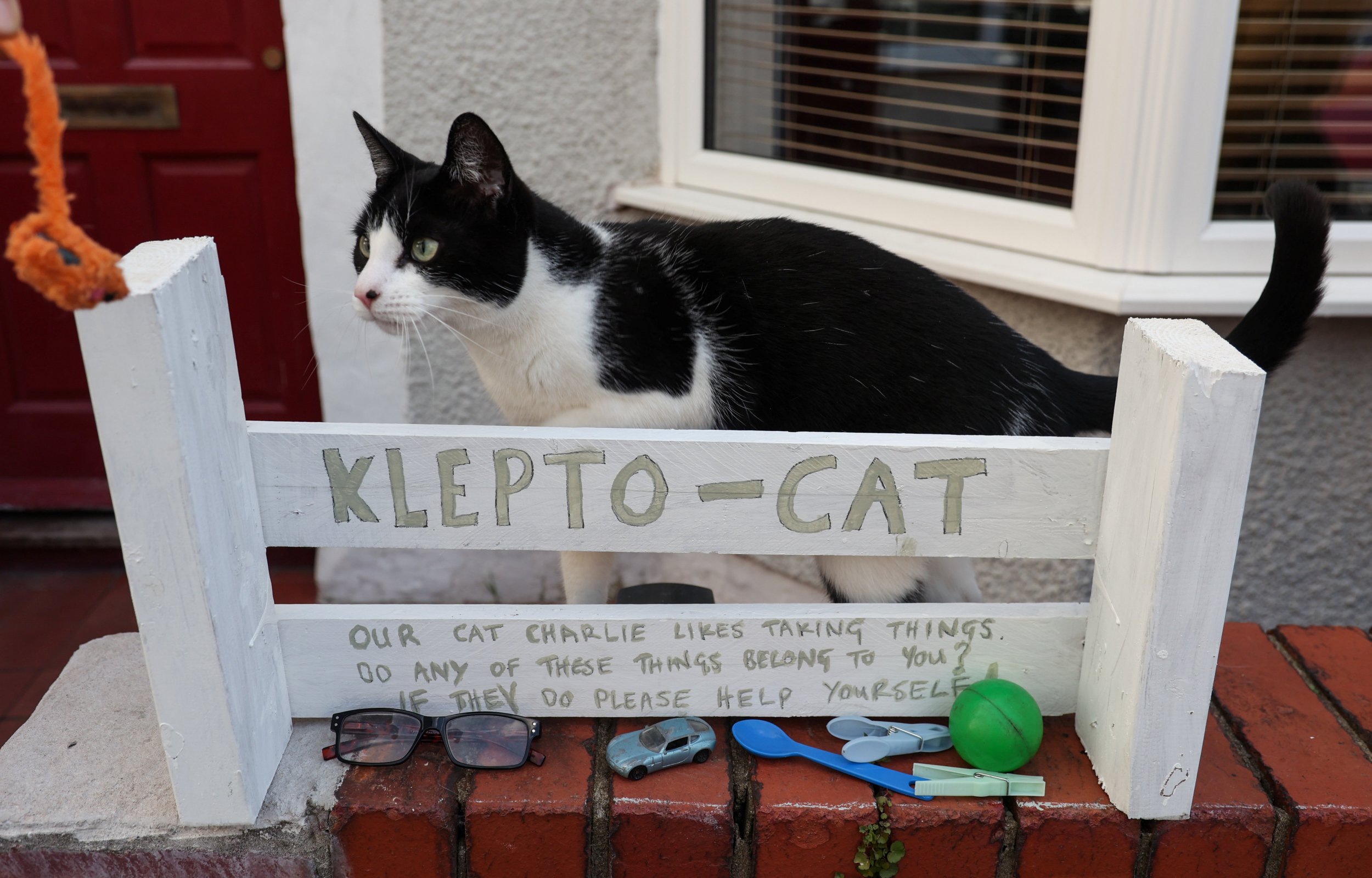 Charlie the cat has a problem.

His vice is not hitting the catnip too hard, or an unhealthy thirst for mouse blood, but theft. He absolutely loves to steal, and he just can’t stop.

Known as ‘Klepto Cat’ as a result of his misbehaviour, the kitty has taken everything from plastic dinosaurs to skateboards from his neighbours.

This means his owner, Alice Bigge, 41, has to spend a lot of her time trying to reunite her one-year-old pet’s stolen goods with their rightful owners.

One way she manages to do this – and attempt to give Charlie a shred of shame – is through a dedicated sign on the wall at the front of her house.

On this wall, she leaves the unclaimed items Charlie has nabbed, along with a sign that reads: ‘Our cat Charlie likes taking things, do any of these things belong to you? If they do please help yourself!’

The sign is the work of Alice’s daughter, Martha, 11, who wants to help teach the feline some manners.

Sadly, this public shaming has done nothing to quell Charlie’s hunger for crime. He continues on without a shred of remorse.

Alice first discovered the cat’s bad habit when she woke up one morning to find a toy diplodocus on her pillow.

Alice, who teaches A-Level film at St Brendan’s sixth form college in Brislington, said: ‘He wasn’t allowed out for three months or so.

‘But it was almost as soon as he was allowed out that he began bringing things back.

‘Over the course of a week or so, loads of toy dinosaurs kept appearing in the house which was really weird.

‘I saw a green stegosaurus one day and wondered if one of my mate’s kids might have dropped it here.

‘The following day, I saw a red stegosaurus – and they just kept coming!

‘I woke up with a diplodocus right next to my head on my pillow – which made me think of that moment from Godfather.

‘Charlie just sat there looking proud of himself.’

Those dinosaurs turned out to be stolen from a kids’ nursery at the end of the road.

‘He’d been going there and picking them all up and bringing them back here one by one,’ said Alice.

Charlie brings all of his ‘finds’ back to the Bigges – who took him and his sister Smudge in as rescue cats after were abandoned as kittens.

So in a way, his thievery is quite sweet – he’s clearly trying to show Alice how much he loves her.

‘He has never caught a bird or a mouse or anything like other cats do to bring back to me, he just goes off and finds whatever he can,’ Alice revealed.

”He’s well into clothes pegs at the moment.

‘He brought back a rubber duck recently, which was quite large and I have no idea how he managed that – and got it through the cat flap.

‘He went through a phase of coming back with those little mini-skateboards too.

‘I think there’s something about the quest that he enjoys.

‘Whether it is discovering something new or just wanting to please me and bring his family a present.

‘Whatever it is, we still love him to bits!’