The pandemic has entrenched the dominance of Melbourne’s top-ranked universities, Melbourne and Monash, raising concerns that poorer, smaller and regional universities might fall behind.

Dr Peter Hurley, education policy expert at La Trobe University’s Mitchell Institute, said a gulf seemed to be emerging between Victoria’s two Group of Eight universities and the others. 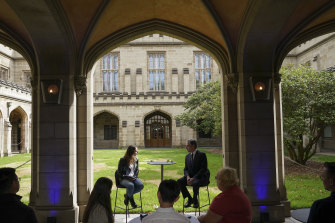 The University of Melbourne, one of Australia’s top-ranked universities.Credit:Kevin Lamarque / AP

“I think what happens in tertiary education is that prestige often dictates the flow of resources,” Hurley said. “The universities that have the greater prestige can attract more research dollars and students.”

Melbourne and Monash are among Australia’s top-ranked and wealthiest universities. Their growing wealth is an ominous prospect for smaller institutions, who are more likely to have students from low socioeconomic backgrounds, and face fierce competition for research opportunities and donations.

The big two also hold more than two-thirds of the sector’s cash and financial investments. Between them, they generated a combined surplus of $994.6 million in 2021, driven by spending cuts, increased research funding and solid investment returns, a recent Victorian Auditor-General Office’s audit found.

Higher education consultant Tim Winkler said the gap grew during COVID-19, and Melbourne and Monash could afford to widen it further.

“If your money is tight, you’re going to have fewer scientists going to conferences overseas, and fewer opportunities to sign new agreements and basically fewer opportunities for growth and development. And after a couple of years of lockdown, that makes a really big difference,” he said.

ANU higher education expert Andrew Norton said while Melbourne and Monash had weathered COVID-19 better than their peers, it was “not clear whether this was a foundation for long-term increases in differences of status and wealth”.

Norton said Monash and Melbourne benefitted last year from Chinese students being more willing than other nationalities to stay enrolled offshore, and also because of their larger investment portfolios, and federal government funding that favoured research-intensive universities.

But Norton said this year was tougher for the big two because the extra research money had gone, global sharemarkets were in turmoil, and visa applications from countries, including India and Nepal, were trending up, favouring other universities.

Phil Honeywood, chief executive of the International Education Association of Australia, said the bigger universities had a much greater capacity to attract donations than their smaller counterparts. The University of Melbourne recently announced it had reached its fundraising target of $1 billion.

“I think part of the issue is that the concentration of resources in some universities means that certain equity groups miss out on the benefits that come from being part of an institution in rude health,” he said. 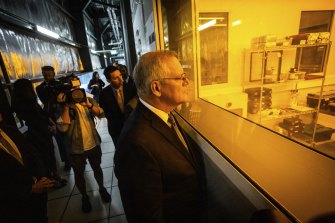 Hurley said while the strength of Melbourne and Monash could be a good thing, it was important to ensure that smaller and regional unis, and the VET sector, were flourishing.

“Otherwise it can end up being a lop-sided system where the best resources are concentrated in certain institutions,” he said.

Winkler said the smaller universities could use this period to innovate. For example, unis could provide classes at night or on weekends, offer new courses, and bring together higher education, TAFE and VET.

The idea of merging universities is being discussed in Western Australia and South Australia, but not publicly in Victoria.

Honeywood said there was no political appetite to see any university disappear. “It’s up to the government of the day, whether it’s state or federal, to tweak the policy settings that might lead to quality outcomes for different sectors,” he said.

Frank Larkins, Honorary Professorial Fellow at the University of Melbourne, said no Victorian university had returned to pre-COVID income, so there was still some way for the sector’s recovery to go.

Monash University said its operating surplus was committed to research grants and contracts awarded for 2022 and beyond, and it had “flexibility to fund other initiatives should they arise”. The University of Melbourne did not respond to a request for comment.