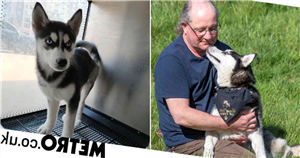 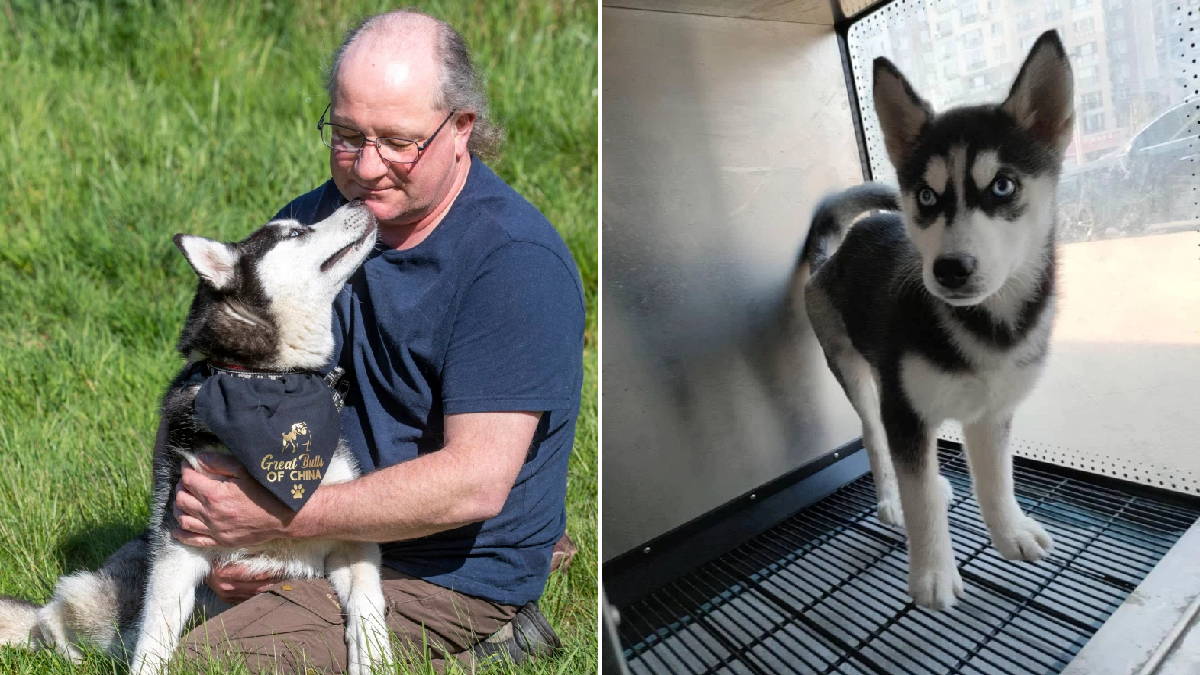 When Christine Arnott received a work bonus, she was excited to do up her kitchen in the home she shares with husband Steve.

But after finding out about a Siberian husky who needed saving from the Chinese meat trade, the pair spent the whole £3,700 on helping the pooch instead,

Deena, aged 16 months, is now settled into her new home in Crossgate, Fife, after travelling from Beijing to Kuala Lumpur, Malaysia, then to London, Manchester, Bolton and finally Scotland.

Due to the pandemic, it took them five months to get her home after falling for her when they spotted her on an animal welfare charity website, the Great Bulls of China.

Christine and Steve, 52, were struck by the pup’s ‘intense’ facial expression, and knew they wanted to give her a better life with their three Alaskan Malamutes and three German Shepherds.

Deena was found aged three months on the streets of Changchun, Jilin Province, with a broken back leg – feared to have been from jumping off a meat truck.

They started paying £135 to sponsor her and used leftover money on doggie treats, beds and blankets as the big day neared.

Health and safety officer Christine said: ‘She was so beautiful and had such an intense expression on her face, yet was unsponsored.

‘We hadn’t planned on getting another dog, but we felt like she needed a home when we saw her picture.

‘We did some research and found out she had been found in a street in Changchun, with a broken back leg after escaping a meat truck.

‘We started paying £135 per month on her kennel and food fees and started trying to arrange to get her home.

‘There were five or six attempts to get her onto a plane, but with the pandemic the cost of flights was astronomical.

‘The charity was sending pictures and videos during these months, it just made us more desperate to get her.

‘I got a bonus at work which we initially meant to spend on a new kitchen, but we just knew this was more important.’

There was one attempt where she got as far as the plane, only to be refused because it was overloaded.

She finally got put on a flight in April and Christine went to pick her up.

She said; ‘We were just mind blown when we got told she was on her way.

‘We went out and bought blankets and treats, and all different brands of food as we didn’t know what she would like.

‘We just couldn’t wait to hold her.’

‘When the guy opened the back of the pet transfer van in Bolton, it’s safe to say I was in floods of tears.

‘It was just amazing to see her and hold her after five months of pictures and videos.’

Christine was then able to take her home and slowly introduce her to their other dogs.

She added: ‘She was a little bit reserved at first but seemed interested, and very curious.

‘It’s been a couple of weeks now, and she gets on fabulous with the other dogs and has settled in great.

‘There are certain things she doesn’t quite get yet, like realising her meals are regular.

‘Sometimes we just sit and look at her and think of the horror that could have happened.

‘To just think of all the thousands of miles she traveled, all the pain she had been in, all the different people that touched her, it breaks my heart.

‘If a human had gone through half of what Deena’s been through they would need years of therapy.

‘The Great Bulls of China were fantastic in all this.

‘They still have many dogs that need to be sponsored, and I hope they get it.’