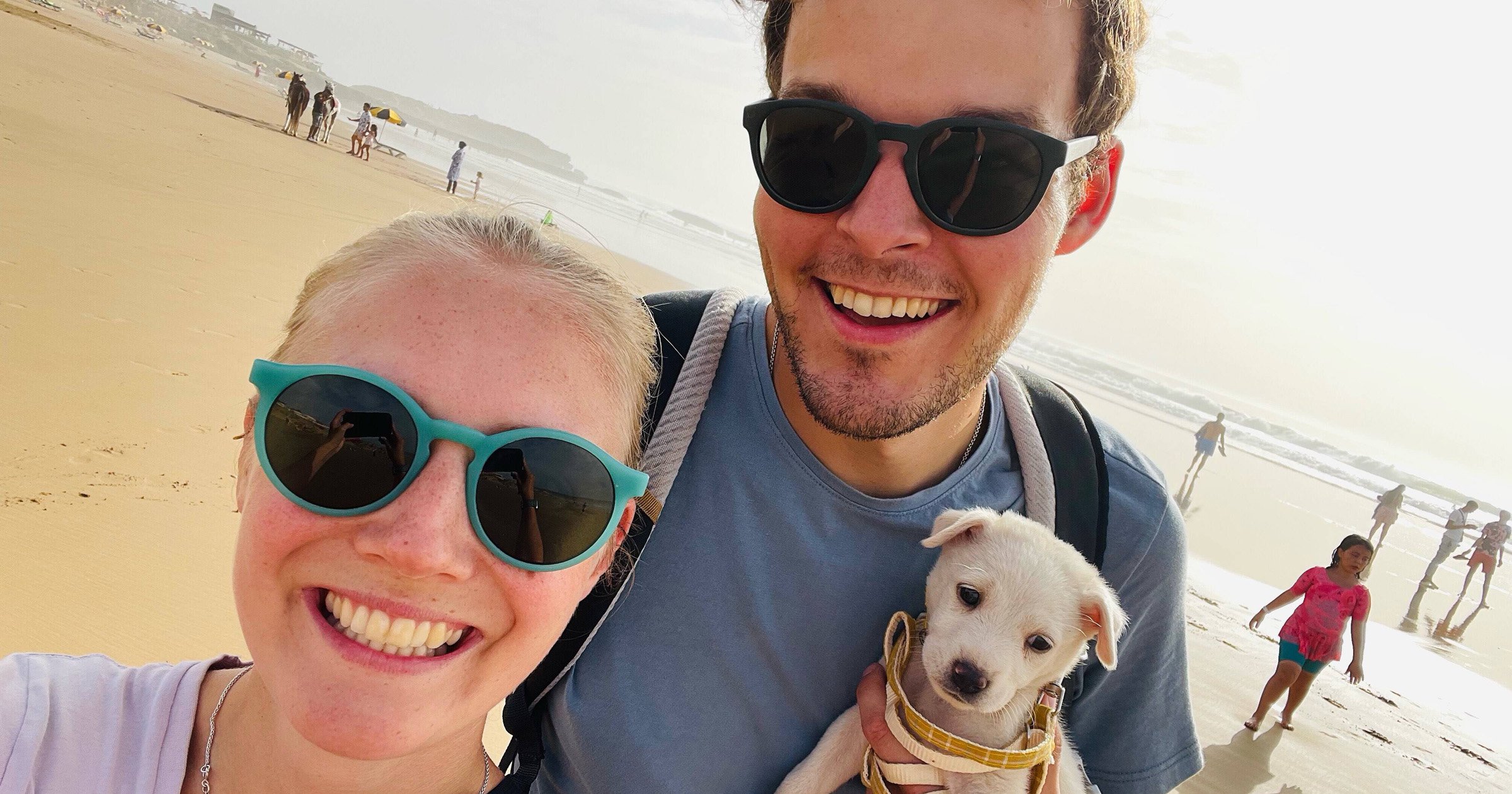 A couple who paused their NHS jobs to travel the world in Vauxhall Agila campervan are now stranded in Morocco until they can raise the funds to adopt a stray dog.

Alex Hunter, 29, and Doug Oldrey, 30, had been completing a charity rally, travelling through 40 countries in a 2003 campercar, which they bought for £450.

After investing another £1000 to convert ‘Sheila the Agila’ into a micro camper with double bed, pull-out stove, kitchen and storage, they set off in July this year.

But when the pair reached Morocco, a five-week-old dog, who they named Tagha, ran in front of the car, almost causing a crash.

The adorable pooch quickly stole their hearts, and Alex and Doug are now raising money to adopt her – and they won’t leave Morocco until they do.

Alex, an occupational therapist, said: ‘She ran out in front of our car on day four in Morocco and was around five weeks old with no mother or any hope of survival.

‘We couldn’t possibly leave her behind so whilst the five month adoption process is underway we plan to continue to explore beautiful Morocco.’

Alex and Doug, a prosthetist, were due to complete their studies in 2020, and go on a planned rally – the famous Mongol Rally, that begins in Europe and ends in Russia.

But when Covid hit, the pair went straight into frontline care. After working at the height of the pandemic, it was only earlier this year that they felt ready to leave their jobs, and finally go ahead with their travels.

Alex and Doug created their own rally, travelling 25,000 miles across 40 countries. They planned their route to avoid Covid border restrictions and conflict areas, and named it the Long Loop Rally.

Alex says: ‘Being in a car is certainly less expensive in terms of rent.

Where have Alex and Doug been on the Long Loop Rally?

‘We have come to terms with the fact that we will likely never be able to afford a house in the UK with current prices and the rise in energy bills, so we’ve had van life as our ambition for some time now.’

Living in a tiny car is by no means an easy featm but the experience has taught Alex and Doug a lot.

They said: ‘We have to be very careful with packing and working out exactly what we will need for a journey.

‘We did lots of short trips in the UK which helped us to work out what we did and did not need.

‘We have actually found that car life offers us freedom. We have come to realise how simply we can live, with less possessions and less need for them.’

And despite Doug being 6ft 2in, they say it works for them.

‘We occasionally have people in disbelief that we live in such a small city car, especially as Doug is so tall,’ said Alex.

‘We’ve also had many comments stating that we would not be able to cover the terrain we have done in such an unsuitable car, but we’ve proved them wrong and taken Sheila over terrain that would challenge the best overlanding 4×4, including mountain slopes, deserts and the Arctic.’

For now though, their travel is on hold until Tagha can be adopted.

Alex said: ‘We became stranded on the last loop of the rally in Morocco in order to complete the adoption process for our newest family member – Tagha the Moroccan rescue pup.

‘But we can’t express how much we have loved living in our car the past few months, and have learnt so much about ourselves and each other and meeting people along the adventure.’