The costs of buying carbon credits to comply with Australia’s climate target will be less than 0.1 per cent of big mining and gas companies’ multibillion-dollar profits, new analysis shows, ramping up pressure on the government to restrict the use of credits to put the burden of emissions reduction on polluters that can most afford it.

The federal government recently upgraded its climate target to cut emissions by 43 per cent by 2030 and will use a policy known as the safeguard mechanism to impose pollution caps on the 215 largest industrial emitters to deliver a large chunk of the greenhouse gas savings it needs to achieve. 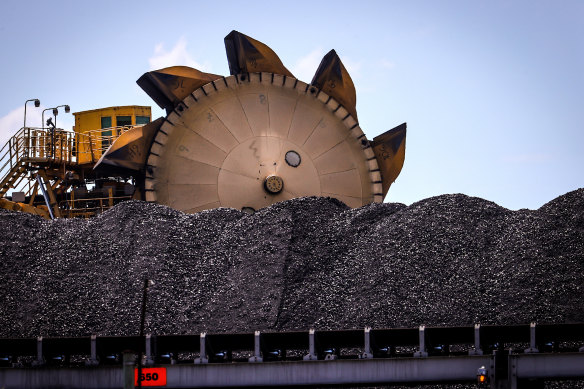 A bucket wheel reclaimer at a coal stockpile in Newcastle Port.Credit:Bloomberg

The federal energy department is considering allowing companies to buy Australian Carbon Credit Units (ACCUs) to offset their emissions instead of directly investing in new technology, and carve-outs for target industries.

The Greens and independent senators who could hold the crucial votes for the government to pass its safeguard mechanism reforms through parliament want the government to restrict or refuse fossil fuel companies’ access to ACCUs.

Analysis by the Parliamentary Library showed gas giant Woodside would have to pay between $2.6 million and $4.4 million a year in 2025 to comply with the emissions reduction required for its stake in the North West Shelf gas business in Western Australia. That is between 0.05 per cent and 0.09 per cent of the company’s annual profit in 2022.

The major miner AngloAmerican would have to pay between $2.6 million and $4.5 million by 2025 – the equivalent of just 0.014 per cent to 0.025 per cent of its annual profit in 2022 – to cover the annual emissions reduction requirement for its stake in the Capcoal mine in Queensland.

Companies captured by the safeguard mechanism will likely be required to cut their emissions by between 3 and 6 per cent a year. The pollution caps will lower over time, with the ultimate goal to hit net zero emissions across the economy by 2050 by encouraging companies to decarbonise, such as by switching from gas and coal-fired power to zero-emissions electricity.

Greens leader Adam Bandt said the forecast costs for coal and gas companies was “just coins down the back of the couch” and under the policies that have been proposed “they’ll easily buy their way out of the scheme”.

The Greens and key independents are concerned big miners could gobble up carbon credits quickly and price out smaller companies that cannot easily switch to cleaner technology, such as cement and fertiliser producers.

The analysis used advisory firm Jarden’s price forecast. ACCUs are currently trading at around $30 a tonne and are expected to rise to $32 a tonne by 2027.

But fossil fuel lobby groups are calling for greater access to ACCUs for their members. The Minerals Council of Australia has called for the price of ACCUs to be capped at $24 a tonne and the Australian Petroleum Production and Exploration Association wants access to international carbon credits – some of which trade at $2 a tonne.

Climate Change and Energy Minister Chris Bowen’s spokesperson said consultation was ongoing and the government is committed to “achieving real emissions reduction out of safeguard reforms”.

Carbon credits are generated by private projects that invest in activities that reduce greenhouse pollution, including capturing pollution before it escapes from landfill sites, or sequestering it from the atmosphere by planting trees or protecting forests.