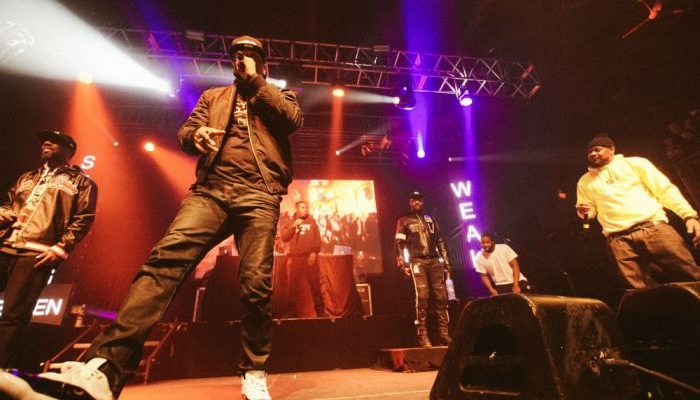 It is no broad boast to call “Enter the Wu (36 Chambers)” — the first album from the Staten Island hip-hop collective Wu-Tang Clan — one of the most powerful and influential debuts of the last century.

From its incendiary 1993 start, Wu-Tang Clan had an auteur’s cinematic touch (credit producer and film fan RZA) and an aggressive rawness that, when mixed with the rap ensemble’s superhero-inspired takes on martial-arts movies and the art of war, was unique.

Add to that a street vibe that miles away from the rap that was popular at the time  — which ranged from the jazzy optimism of De La Soul and Digable Planets to Dr. Dre and Snoop’s smooth West Coast G-funk — and Wu-Tang Clan was, as they often say, nothing to f— with.

And it was that hard-edged debut that Wu-Tang Clan celebrated on Thursday night at Philadelphia’s Franklin Music Hall on the first date of their brief 25 th anniversary tour celebrating the album’s release.

“When Wu-Tang Clan came out, Philly was the best market that we had outside of New York,” announced Method Man several songs into the set. “No additives, no preservatives. Just pure hip-hop.”

Indeed, Philly looms large in the group’s history and mystery. Not only did Inspectah Deck offer up a Philadelphia boxing legend for band’s first single, 1992’s “Protect Ya Neck,” with the lines, “I smoke on the mic like Smokin’ Joe Frazier / The hell raiser, raisin’ hell with the flavor,” in a less happy note, Ol’ Dirty Bastard was arrested at a South Philly McDonald’s in 2000 after escaping from a court-mandated drug treatment facility. Not only was he represented onstage with the signage “RIP ODB,” Young DB ably took on his tracks that featured his dad, such as “Shimmy Shimmy Ya” and “Got Your Money.” YDB’s growling raps and lurching stage moves proved that the Wu fruit had not fallen far from the tree.

The group members staggered their stage entrances, starting with a throbbing, menacing “Bring da Ruckus.” By their third track, however — “Clan In Da Front” bumped up against “Wu-Tang 7th Chamber” — the ensemble was in full flower and full flow. With its layered raps, cackles, barks and shouts of “Wu!,” their a chorus of chaos nestled against slamming stammering beats. To go with its punkish verbal energy, the Wu’s staging was a fast mess of constant motion, with each man bouncing before or behind the other.

“The two most important things that you have to bring to a Wu-Tang show is weed and energy,” announced Method Man, the evening’s de facto emcee and the band’s most outgoing member.

Method and Raekwon were the most vocally commanding members of the group at this show, with RZA and Ghostface the most subdued. But still, audiences members could easily single out the nuances of each man’s voice during their turns or verses at the mic. Cappadonna’s hyper-quick verse during Ghostface’s “Winter Warz” and the flighty fight songs between GZA and Genius — such as “Duel of the Iron Mic” and “4th Chamber” — allowed each actor a dramatic, angry soliloquy.

Still, a united Wu-Tang Clan is always better than its separate parts — in fact, what truly came through during this set is that Wu-Tang is as much a family as it is a group.

“How often do you get the full Wu-Tang together?” asked Method Man.