Gathering at Melbourne’s Flemington Racecourse for the start of The Amazing Race Australia’s first international season since the pandemic, the contestants echo sentiments felt around this nation of globetrotters.

The NSW “country kids” say closed borders have stolen their youths. The NSW dragon boating mums “just want to get on a plane and go somewhere!” And the newlywed Queensland teachers can’t wait for the honeymoon they never got. 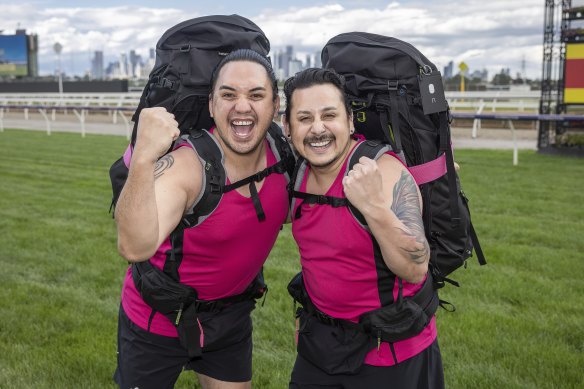 Pako and Mori tackled stressful situations with a sense of humour.Credit:

But there’s another newlywed couple who missed out on a honeymoon. Sydney “hubbies” Pako and Mori married during lockdown after a decade together.

The self-described “class clowns” plan to tackle the challenges of the competition as they do life.

“We all know The Amazing Race is a stressful situation,” Mori says. “Our motto was to line everything with humour, because if you aren’t laughing, you’d be crying, eh?”

Pako adds: “That’s exactly how we manage difficult situations. We love mocking each other. Anyone can say anything to us and we’ll laugh it off. We’re fools!”

The first-time reality contestants were motivated by their love of travel. For Mori, it was also an opportunity to honour his Chilean parents.

Having served five years as “the most flamboyant military policeman you’ve ever seen” in the Royal New Zealand Air Force, Pako, who is Maori, has already clocked up the air miles.

He fondly recalls his time in the military. “It was very open and welcoming in the air force back home. It wasn’t a masculine environment, but I can be masculine if I want to. I’m a tough cookie. I fit right in. It was such an accepting workplace.”

Not included in the final edit are the couple’s concerns about travelling to the first destination, Ouarzazate in Morocco, where homosexuality is punishable by law.

“We were a bit nervous because it’s illegal there for us to be partners and there was that fear,” says Pako. “We actually had a list of countries that we were hesitant to step foot in because of prosecution. But that place was beautiful. We fell in love with Morocco and I’m happy that we went there.”

He acknowledges the presence of the production crew may have played a part in their experience, but maintains “I still feel it would be safe there. I mean, we were wearing hot pink and running around town and we wouldn’t be wearing that [if we returned]. But I never felt subjected to any type of discrimination.”

Unlike the US Amazing Race, which chartered a plane for its 2022 season, the Australian cast flew economy. But COVID protocols reduced the free time they were able to spend.

“Staying safe was our priority, so we didn’t get to see some places,” says Mori. 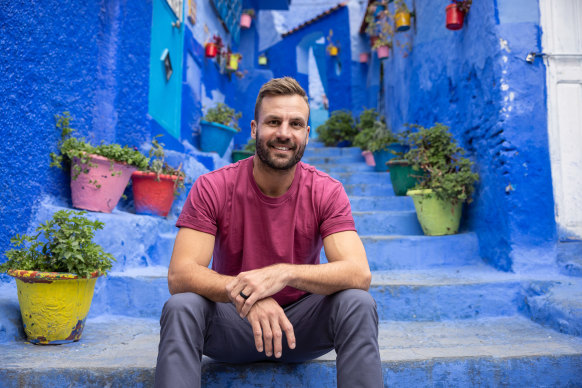 The Amazing Race Australia, with host Beau Ryan (above), heads back overseas for the first time since the pandemic.Credit:Ten

Pako says: “Going to these countries, I ended up finding that the numbers were low with COVID, which was maybe why we went to these beautiful destinations. We weren’t taken places that would be dangerous. We had our masks with our little [Amazing Race] logo.”

Fans of the franchise mobbed them at every turn.

“We know that The Amazing Race is worldwide, but we didn’t realise how many people are diehard fans around the world,” says Pako.

A highlight of the trip for Mori was meeting host and former Footy Show prankster Beau Ryan.

“I said to my husband, ‘I can just picture myself running to the pit stop and Beau’s waiting there with open arms.’ So I got my moment.”

Their marriage is stronger for the experience.

“What I learnt about us is that we are a good team,” says Pako. “We’re a dynamic duo. We’re not the fastest, the smartest or the fittest.”

Mori says: “We’re there representing for the average gay Joe. We’ve got dad bods. And we got to do it all.”