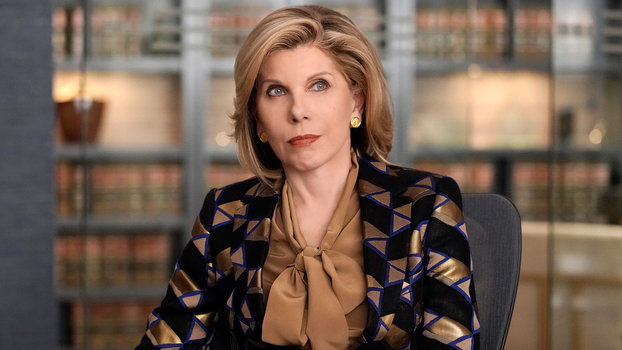 A judge asks Diane Lockhart, played by Christine Baranski, a question many women may find familiar. “Hey, what’s the matter with you? I just ruled in your favor, don’t I get a smile?” A Chicago lawyer who’s been at the top of her game since The Good Wife premiered in 2009, Lockhart looks up from the plaintiff table a bit dazed. “You should smile more,” he says. Diane wanly turns up the corners of her mouth in a brief attempt to obey the judge’s order. Then suddenly, she’s in stitches — a gleeful, genuine laugh echoes through the courtroom and continues as she strides out to move on with the rest of her day.

It’s a scene typical of The Good Fight, the wry, brilliant legal-political drama (and Good Wife spinoff) that returns to CBS All Access for a third season on March 14.

Diane Lockhart has always been a role model. A committed and successful career woman of clear ambition and strong moral fiber, she is a founding partner in the law firm that takes a chance on Julianna Marguiles’ character in The Good Wife. Over seven seasons that earned the actress six Emmy nominations, Baranski has created one of the most layered and palpably human portraits of a woman in charge in television history. If Margulies and her husband (played by SATC’s Chris Noth) are The Good Wife’s Hillary and Bill in the making, Diane is cut closer to the mold of a Ruth Bader Ginsburg.

But those were different times. On The Good Fight, which premiered in February 2017, Diane’s plan to retire goes up in smoke when she loses all her savings in a ponzi scheme. She instead begins a new chapter in her career, facing both personal misfortune and the country’s political upheaval in the wake of President Trump’s inauguration. The firm she joins is majority African-American and crusades more often on the side of social justice than her previous, more corporate outfit. The Good Fight reinvents a Diane who goes to battle for the values she’s long embodied, even if she’d rather be idling in the south of France.

Creators Michelle and Robert King, who approach timely plotlines with a mordant and at times downright goofy sense of humor, have never been coy about their politics. (If the spinoff’s title isn’t hint enough, its glorious opening sequence explodes objects to smithereens — including TVs tuned to a white nationalist rally, Vladimir Putin, and Trump himself.) When the alleged tape of Trump cavorting with prostitutes in a Moscow hotel makes a cameo in season 2, laptops glow neon yellow in the lawyers’ faces as they watch the golden shower fetish it reportedly depicts. Other ripped-from-the-headlines episodes address racial profiling by Chicago police, and women coming forward with accusations of sexual misconduct.

As the series enters its third season, Diane’s firm is in talks with the Democratic National Committee about pursuing President Trump’s impeachment.

But Diane is more than simply a chic and determined avatar for liberal resistance. She has never been above contradictions, defending clients on the wrong side of her own convictions, and falling in love with her now husband (played by Gary Cole), a Republican ballistics expert and her on-again off-again romance dating back to early seasons of The Good Wife. She used to barb him with good humor over his support of Sarah Palin; now she carries a gun.

Diane also confronts challenges to her bonafides as a feminist from younger women. Though she supports aspiring female colleagues in her office, she’s never been a fawning mentor. She’s the tough, polished boss you’d be afraid to disappoint but never terrified to approach. When a client loses his job and future career prospects for being included in a database similar to the “Shitty Media Men” list, Diane successfully sues to have the site taken down. The founder accuses her of being a traitor, but Diane cuts her off. “Women aren’t just one thing,” she says with force. “And you don’t get to determine what we are.”

We’ve seen Diane be so many women over the years, but perhaps none as vulnerable as the one who appears to be coming apart at the seams in season 2. Diane is no longer a woman who always has it together, perhaps her most relatable turn to date. On the news, she sees that Trump has started keeping a pig (as in, an actual pig) in the White House. Next he’s insisting on taking goats (as in, actual screaming goats) to a foreign summit. It’s deliberately unclear whether Diane hallucinates these stories, because she briefly dabbles in micro-dosing on psychedelic mushrooms to cope with the surreality of everyday life. In either case, barnyard political headlines and Diane’s slide into trippy self-medication are an accurate representation of how insane today’s world can make anyone feel, and she navigates it with aplomb.

“It’s alright if the world is crazy,” Diane tells her business partner, having achieved some level of personal peace amid the chaos around her. “As long as I make my little corner of the world sane.” It’s the least any of us can hope to do.