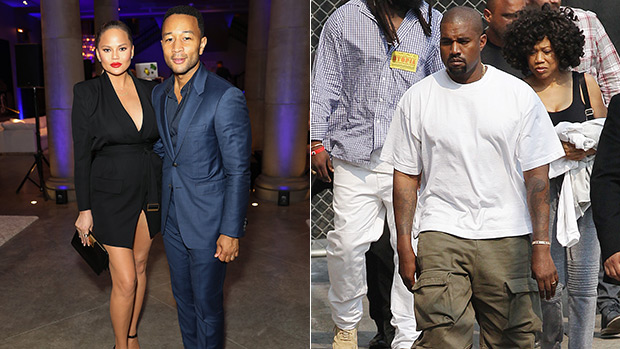 About time! Chrissy Teigen & John Legend may be ready to reconcile their friendship with Kanye West, now that he has denounced his support for Donald Trump’s political party.

It was hard for Kanye West’s friends to see eye-to-eye with him in recent months, given his devoted support for Donald Trump, but tides may be turning. After seeing his recent string of Tweets, John Legend, 39, and Chrissy Teigen, 32, think the old Ye is back! “John Legend and Chrissy Teigen are both very open to repairing their relationship with Kanye. They have missed the old Kanye and the days when they’d hang with Kim,” a source told HollywoodLife EXCLUSIVELY. They’ve been extremely worried about him and his behavior, and are hoping that his political rants are over. It’s been hard for Chrissy and Kim, as they had their own relationship. John and Chrissy only want to see Kanye be in a good place. They both feel that it was a matter of time that he would come back around, and they’re hoping to get back to their old friendship.” HollywoodLife as reached out to reps of both stars for comment.

The revelation from the couple comes after Ye said he was “used,” by right-wing Trump supporter Candace Owens, 29, and claimed he will be distancing himself from politics all together. “My eyes are now wide open and now realize I’ve been used to spread messages I don’t believe in. I am distancing myself from politics and completely focusing on being creative !!!” the rapper said in an Oct. 30 Tweet. “I would like to thank my family, loved ones, and community for supporting my ACTUAL beliefs and my vision for a better world,” he said in a separate Tweet, that same day.

The string of Tweets were shocking for fans and friend of the rapper alike, given that it was just several weeks ago, on Oct 11, that Ye made a trip to the Oval office. His appearance garnered loads of attention, and Kanye controversially aligned with Donald on a number of issues that day, and even made comment about how his “friends” don’t like when he rocks his MAGA hat. “I think it’s the bravery that helps you beat this game called life. You know, they try to scare me to not wear this hat. My own friends. But this hat, it gives me power in a way,” he said during his visit.

Despite politics putting a (temporary) wedge in their friendship, Chrissy insists that they have remained civil. “The thing with Kanye is that his opinions have always been super strong,” Teigen told Vogue in an interview. “He’s never been the guy to push them on you, but he will say what he wants to say. Same with John. That’s why I loved that they were able to have this civil discourse. Kanye learned a lot in the months after that. John did, too.”