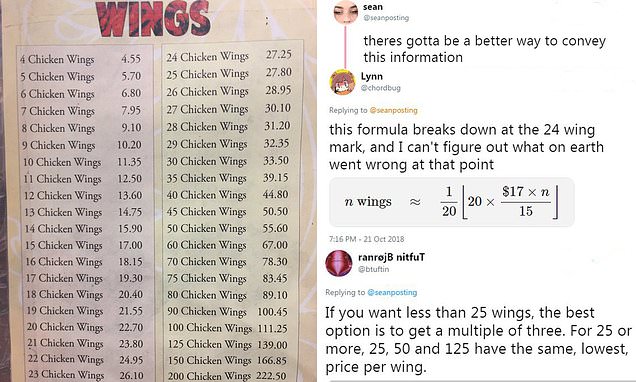 If you want to get the best price on chicken wings at one Philadelphia Chinese restaurant, you may want to bring along a graphing calculator.

Danny’s Wok in West Philadelphia has a very unusual pricing scheme for its chicken wings — and they have a whole chart to lay it out.

The problem is, there seems to be no rhyme or reason to why some quantities cost more per wing and some cost less per wing. 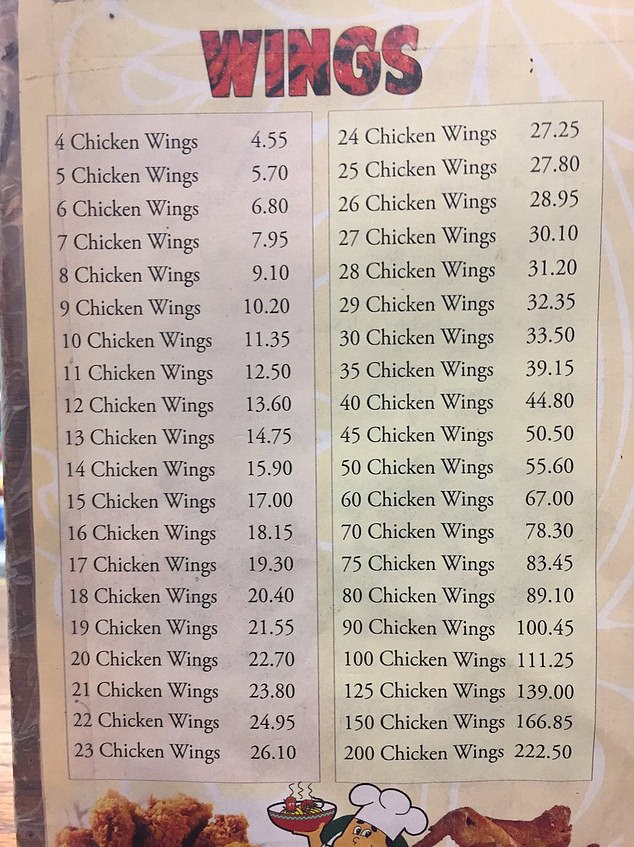 Forget it, we’re getting drumsticks! Danny’s Wok in Philadelphia, Pennsylvania has a bewildering pricing scheme for chicken wings, which is baffling the internet

So confused! A picture of the bizarre menu was posted on Twitter by 24-year-old Philadelphia resident Sean Woodall 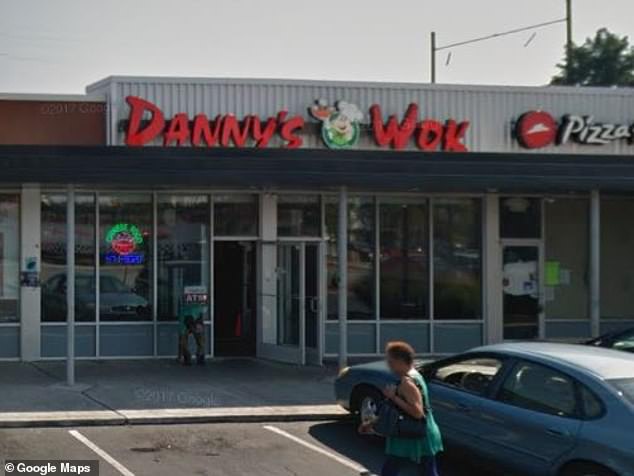 Location: The restaurant – Danny’s Wok – is in West Philadelphia, and sits next to a Pizza Hut 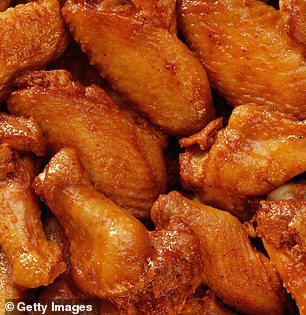 No idea! Sean said he had ‘no idea why the prices are so nonsensical’ and didn’t ask

And that’s sort of the case at Danny’s Wok — at least for some quantities.

A menu posted on Twitter by 24-year-old Philadelphia resident Sean Woodall shows a list of different quantities of wings, ranging from four to 200.

Next to each number is a price, but the prices don’t rise in regular increments, which has left the tens of thousands of people who liked his tweet scratching their heads.

Simply put, the pricing scheme is not consistent. Buying a larger quantity of wings doesn’t necessarily mean you’re getting the lowest price per wing.

For instance, if you buy 75 wings, you’re paying less per each wing than if you buy 90 wings.

Scratching their heads: Dozens of Twitter users chimed in to crack jokes about the odd menu

It’s clucking nuts! Some broke down the math and figured out you don’t save much by buying more — but it’s not a flat price per wing, either

Poultry savings! Many seem confused that they would bother with inconsistent pricing if it doesn’t actually save customers any real money 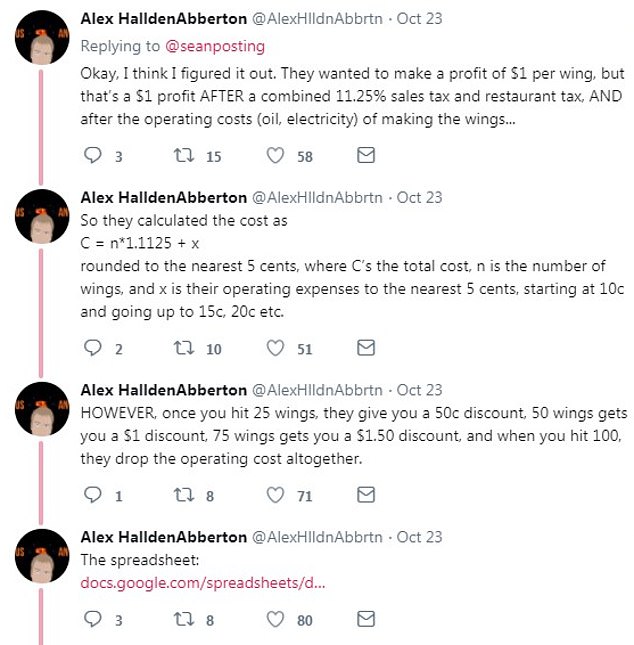 And that’s not the only thing that has people confused. It’s also that the savings simply doesn’t add up to much: Buying a larger quantity could bring the price down just fractions of a cent.

That means they are saving less than once cent per wing bought — so Twitter users are wondering, wouldn’t it have made more sense to simply have a flat price per wing.

Dozens of people have commented on Sean’s post to express their discomfort over the menu.

What’s more, a surprising number of people were so thrown off by the pricing that they decided to break down the math.

Too much effort! Others did their best to determine which quantities are the best deal 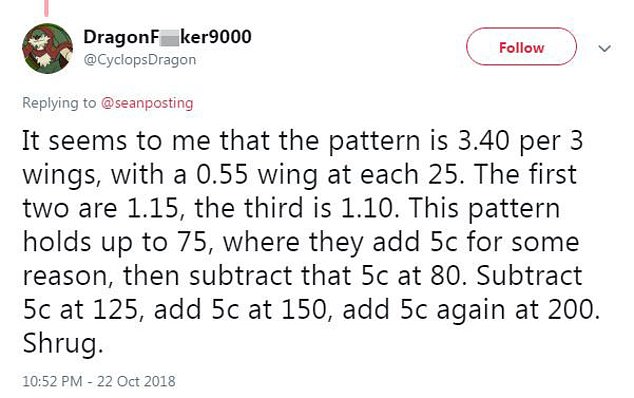 Who doesn’t love some algebra? This user admitted he didn’t know why he spent so much time figuring this out 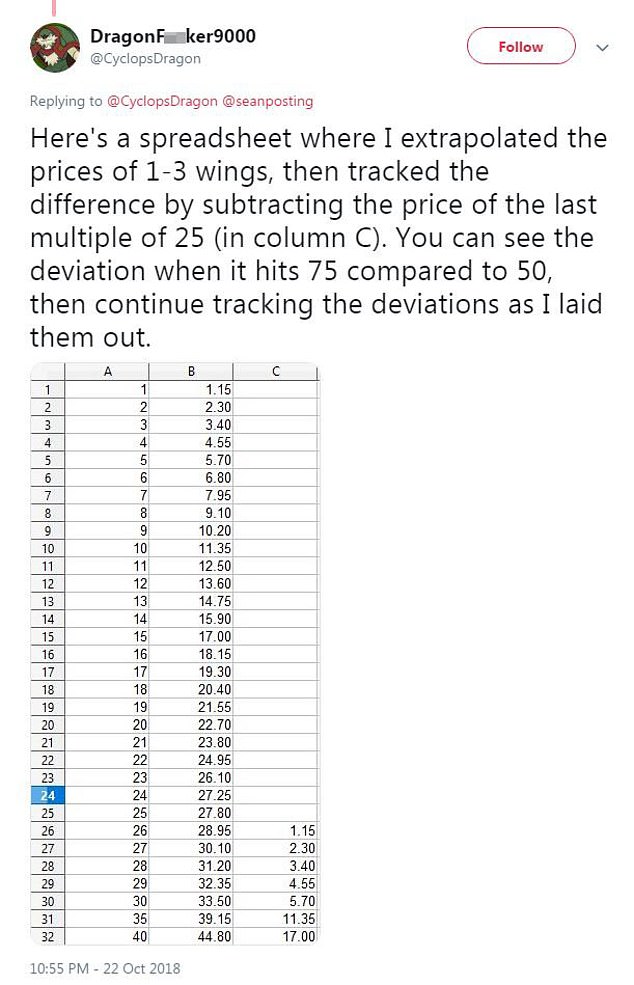 Wow! He even plugged the numbers into a spreadsheet to figure out the math

‘Purchasing 200 wings instead of 4 brings the per-unit cost down by less than two full cents,’ wrote one.

Some truly went the extra mile, trying to map out a pattern — and making graphs.

That user also posted a spreadsheet to show his work.

‘Okay, I think I figured it out,’ wrote another. 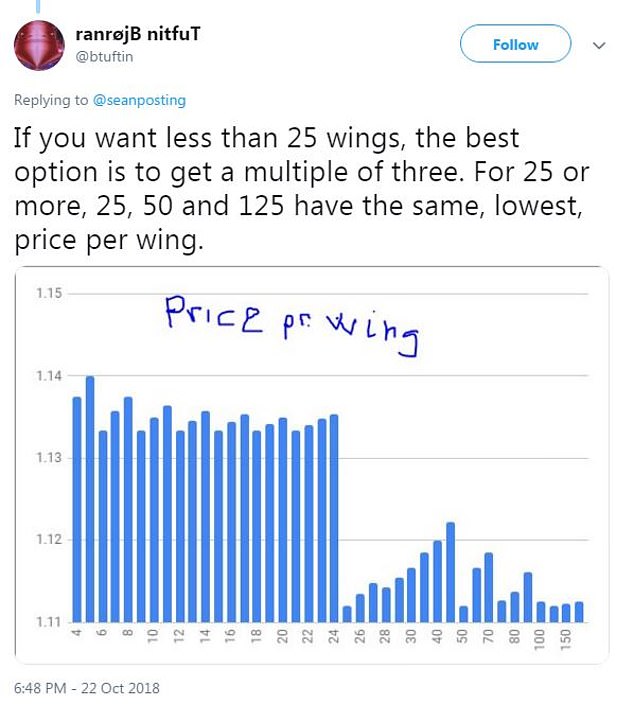 So weird! This person made a graph to show that buying more doesn’t necessarily mean your cost is less per wing 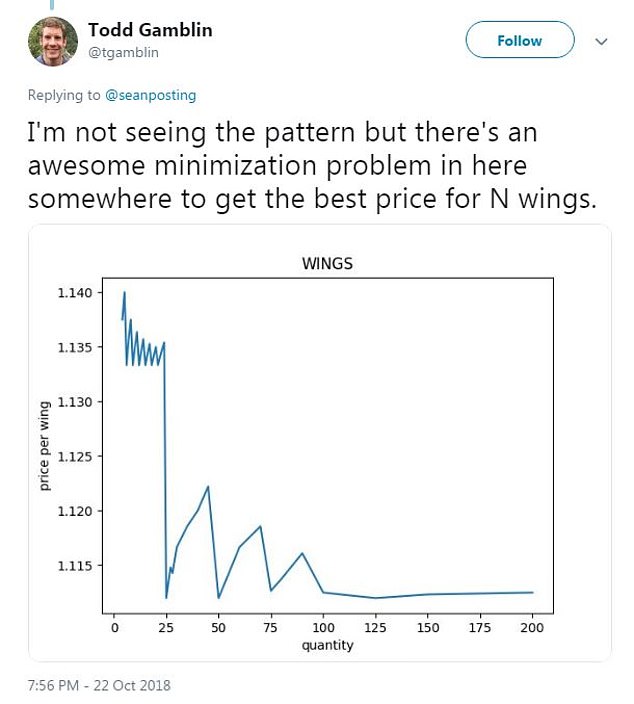 XYZ: thers posted their own graphs of the price per wing at different quantities 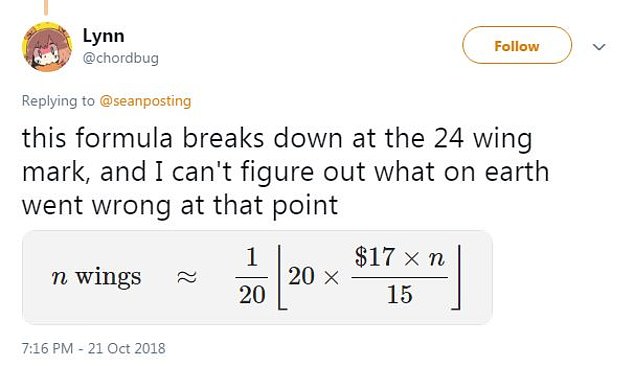 Breaks down: This woman says she found a formula that works — but only up to the 24th wing 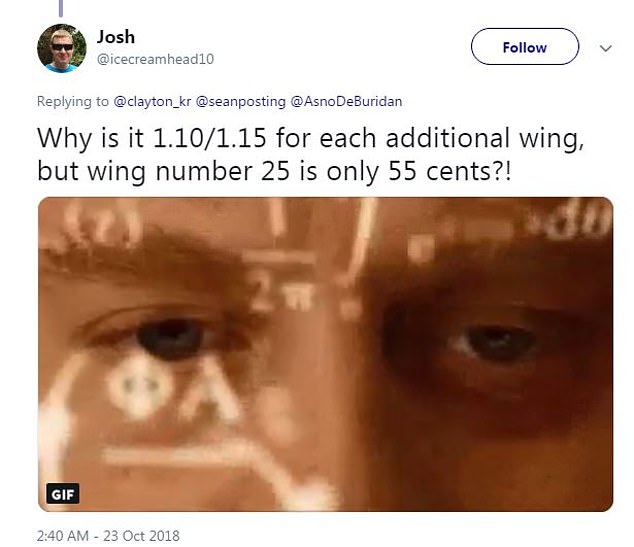 Seriously strange: Some posted GIFs and memes to show how confused they were

‘They wanted to make a profit of $1 per wing, but that’s a $1 profit AFTER a combined 11.25% sales tax and restaurant tax, AND after the operating costs (oil, electricity) of making the wings…

It seems likely that the owner of the restaurant is either a math wiz who thought it would be fun to come up with a complicated formula, or else is a prankster who figured the odd pricing would be funny.

Sean, who took the viral picture of the menu, told BuzzFeed he had ‘no idea why the prices are so nonsensical’ and didn’t ask.