A former member of parliament has resigned from the Victorian Liberal Party, claiming it has “squandered the opportunity for renewal” by preselecting an anti-abortion candidate to run for the upper house.

Melton City councillor Moira Deeming was preselected by local members on Saturday to replace conservative MP Bernie Finn in the top position of the western metropolitan district, despite being rejected as a candidate for the federal election over concerns she would generate too much controversy, as revealed by The Age on Thursday. 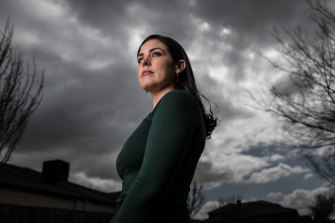 Moira Deeming has been chosen by Liberal Party members to replace outspoken MP Bernie Finn in the contest for the upper house Western Metropolitan Region seat in the state election.Credit:Jason South

Finn, a friend of Deeming, was expelled from the Liberal Party’s parliamentary team in May for repeated unbecoming conduct, mostly on social media. The behaviour included depicting Premier Daniel Andrews as a Nazi and advocating that abortion should be prohibited for rape victims.

Andrew Elsbury, who represented the western metropolitan district for the Liberal Party alongside Finn between 2010 and 2014, said party members had preselected someone who was “basically going to spout the same stuff as Bernie Finn used to”.

He resigned as a member of the party on Wednesday because Deeming’s preselection confirmed his long-held concern that his views no longer aligned with the party.

Elsbury, who wished Opposition Leader Matthew Guy the best at the November election, had considered vying for preselection but decided against it to give the party a chance for renewal. 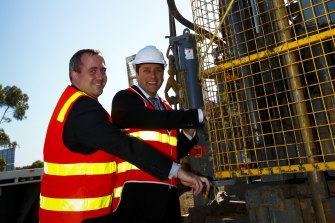 Elsbury backed another candidate but said he could have supported anyone but Deeming, and now believes the Coalition will never claw back a second upper house seat in the western metro region.

Deeming, a high school teacher and mother of four, has said the new consciousness about gender fluidity and the implications of additional rights for trans people were her “number-one issue”. She has also taken a public stance against COVID-19 vaccination and mandates.

In 2020, Deeming wrote online that “no amount of tragedy and no amount of money can justify the deliberate taking of an unborn child’s life”. 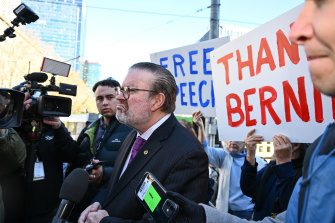 Bernie Finn among supporters on the steps of Victoria’s Parliament House after being expelled by the Liberal Party.Credit:Joe Armao

In March, the Victorian branch’s administrative committee voted for Deeming to run in the federal seat of Gorton. But after the preliminary vote and before the meeting formally endorsed her, a top party official in the meeting relayed the view of Morrison’s office, which was that negative media coverage of Deeming’s hardline social views could distract from the then prime minister’s campaign.

Another vote was conducted, and a different candidate picked, according to five sources who confirmed the events of the March 26 meeting. All were speaking anonymously because party rules prohibit public commentary.

Finn told The Age it would be fair to describe Deeming – who he endorsed ahead of the preselection vote involving about 45 party members – as his protégé. He described her as intelligent and politically shrewd and said the vote proved people in Melbourne’s west wanted a socially conservative MP.

He has now joined the Democratic Labour Party.