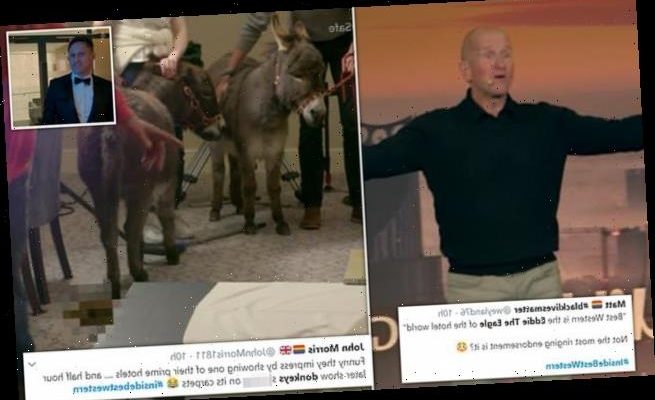 The real David Brent strikes again! Best Western CEO says the chain is the ‘Eddie The Eagle of the hotel business’ and a donkey has an accident on the floor during Christmas ad filming on A Very British Hotel Chain

A Very British Hotel viewers were left amused when the CEO compared Best Western to being like the ‘Eddie the Eagle of the hotel business’ – and trailed two donkeys through a four-star hotel to film the annual Christmas advert.

In last night’s episode of the Channel 4 show, Australian-based CEO Rob Paterson – who has previously been compared to Ricky Gervais’ character David Brent from comedy series The Office – surprised staff with a guest speaker at a hotel conference.

While many took punts that Nicola Sturgeon or Clare Balding might turn up, the much-awaited celebrity guest was Eddie the Eagle – who in 1988 became the first competitor since 1928 to represent Great Britain in Olympic ski jumping, finishing last in the 70 m and 90 m events.

And when Rob commented that he thinks the Best Western is the ‘Eddie the Eagle of the hotel business,’ it wasn’t long before viewers took to Twitter.

‘BW is like Eddie the Eagle? What? Last place?’ joked one, while a second commented: ‘Best Western is the Eddie The Eagle of the hotel world” Not the most ringing endorsement is it?’ 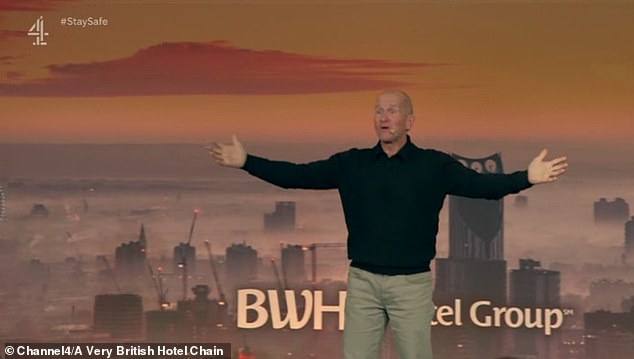 A Very British Hotel viewers were left confused when Australian-based CEO Rob Patterson compared Best Western to being the ‘Eddie The Eagle of the hotel world.’ Pictured, the Olympian during the ambition conference 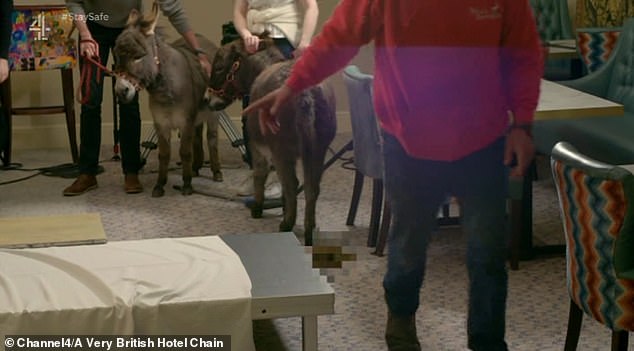 For their annual Christmas video, the team decided to film two donkeys in their four-star hotel – but it wasn’t long before one made a mess on the carpet

Many who tuned in took to Twitter during the episode, with one writing: ‘Funny they impress by showing off their prime hotel and half hour later show donkeys s****ing on its carpets’ (pictured)

A third questioned: ‘Does the CEO of #BestWestern even know who #EddietheEagle was!?’

‘When I was little I was always a bit of a daredevil and whenever my friends dared me to do something, I would go and do it – just for a laugh. I didn’t realise it would result in me competing at the winter Olympics.

The more that people told me that I couldn’t do something, the more that inspired me to prove them wrong.’ 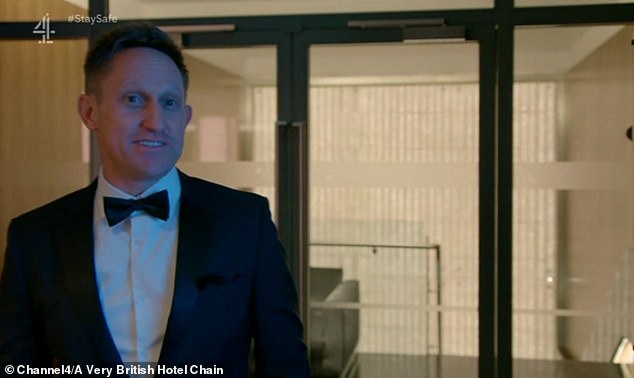 CEO Rob (pictured), who has been compared to The Office’s David Brent, said: ‘When we announced we wanted to reach 500 hotels by 2022. There wasn’t many people who could see that happening. ‘A bit like our speaker today Eddie the Eagle, nobody thought he was going to make the Olympics, he persevered and he got there’

One person who tuned in joked: ‘Donkey s*** everywhere. If I owned that hotel I’d cross charge the carpet cleaning to head office’ (pictured)

Providing further explanation to his choice of guest speaker, Rob went on: ‘When we announced we wanted to reach 500 hotels by 2022. There wasn’t many people who could see that happening.

‘A bit like our speaker today Eddie the Eagle, nobody thought he was going to make the Olympics, he persevered and he got there.’

Elsewhere, the hard-working team set to work cleaning the luxurious four-star Mount Pleasant ahead of their Best Western video shoot for the annual Christmas advert – which starred two donkeys.

After trailing the animals through the hotel reception, it was time for the bedroom scene – where the donkeys were photographed in bed and even in the bath.

But it seemed the staff weren’t the only excited ones, as the donkeys decided they needed to go to the toilet on the freshly cleaned carpet.

Taking to social media, one person joked: ‘Looking forward to going onto to trip advisor this week to see if someone wrote a review citing donkey s**t on the floor,’ while a second commented:

‘Funny they impress by showing one of their prime hotels …. and half hour later show donkeys s****ing on its carpets.’

A third wrote: Donkeys in a hotel what more do you want on channel 4 hahaha,’ while a fourth added: ‘They used their top hotels to allow donkeys s**t in it for their marketing campaign.’