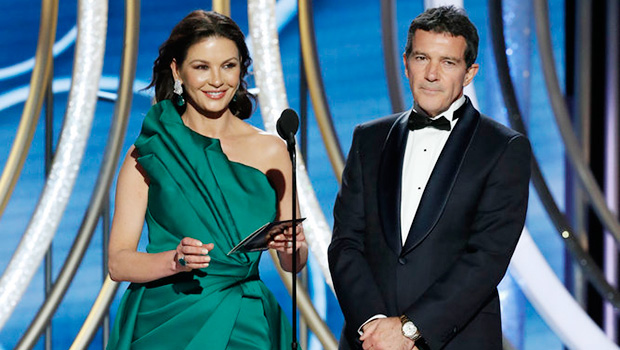 We’ve been awaiting this reunion since 2005! ‘Zorro’ film series stars Catherine Zeta-Jones and Antonio Banderas joined forces once again at the 2019 Golden Globe Awards to present the winner for the Best Motion Picture — Foreign Language.

Catherine Zeta-Jones, 49, and Antonio Banderas, 58, just gave us flashbacks to a certain masked vigilante during the 2019 Golden Globes, which aired Jan. 6! The co-stars of the 1998 film The Mask of Zorro, and its 2005 sequel The Legend of Zorro, reunited at the Hollywood Foreign Press Association event in the Beverly Hilton Hotel, minus the swords and fencing duels. Instead, they dressed up in their finest evening wear to present the winner for the Best Motion Picture — Foreign Language, which went to Roma, directed by Alfonso Cuarón! They were appropriate choices for the job, as they rolled their R’s in perfect (and accurate) unison. The reunion was unexpected, as Twitter user @JarettSays humorously pointed out, “honestly, didn’t have ‘Mask of Zorro’ Reunion’ on my Golden Globes Bingo card tonight.” Neither did we.

Catherine also received generous screen time as the cameramen filmed her joyous reaction to husband Michael Douglas winning Best Performance by an Actor in a Television Series – Musical or Comedy, for his role as Sandy Kominsky in The Kominsky Method. Meanwhile, Catherine’s co-star attended the award show as a nominee himself. Antonio was up for Best Performance by an Actor in a Limited Series or a Motion Picture Made for Television, but the honor ultimately went to Darren Criss, star of The Assassination of Gianni Versace: American Crime Story.

The Zorro stars weren’t the only ones to run into a familiar face within the Beverly Hilton ballroom! Anne Hathaway and Emily Blunt, stars of the 2006 flick The Devil Wears Prada, also reunited on stage after Anne presented the nominees for Best Performance by an Actress in a Motion Picture — Musical or Comedy, and Emily beat out the other nominees for her starring role in Mary Poppins Returns! Meanwhile, Killing Eve stars Sandra Oh and Jodie Comer ran into one another on the red carpet and even held hands! Okay, the show just aired its Season 1 finale in 2018, but the moment was still so sweet — and major props to Ms. Oh for nabbing the prestigious honor of Best Actress in a TV Series, Drama!

In addition to this Zorro reunion, check out even more show highlights from the 76th annual Golden Globes in HollywoodLife’s gallery above! Man, those stars sure know how to command a mic.