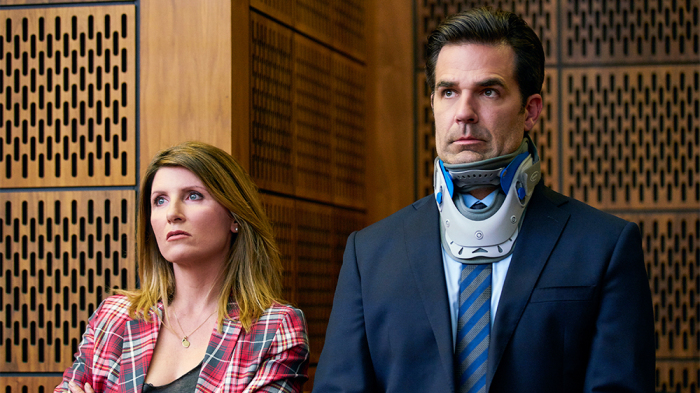 SPOILER ALERT: Do not read unless you’ve watched the fourth and final season of “Catastrophe,” streaming now on Amazon.

The central relationship on Amazon’s comedic “Catastrophe” began in the first season when Rob (Rob Delaney) got Sharon (Sharon Horgan) pregnant. The duo that barely knew each other was thrust together in a much longer-lasting way than they ever could have expected, with Rob taking up permanent residency overseas to be with Sharon, and the two of them eventually getting married and having another child. So, it was only fitting that the fourth and final season came to a close with Sharon learning she was pregnant again and Rob getting a job offer that could see them relocating to his home turf in America. But what exactly the characters decide to do will go unwritten.

“We didn’t want to answer every question,” Delaney tells Variety. “Hopefully we made something where people can replay it in their minds and feel a little bit of involvement with it. We’re so grateful that anybody watched the show and that we can involve the audience in getting to choose what happened at the end based on their life outlook and philosophy.”

Since they knew they were embarking upon their final season when they set out to break story for the fourth season of “Catastrophe,” Horgan shares that they had a “checklist of things” they needed to make sure they did along the way. At the top of that list was “making sure that each episode felt like a typical ‘Catastrophe’ episode [because] we didn’t want them to be wearing the weight of the final season on their sleeves too heavily,” she says. But, they also felt they “needed to get Rob and Sharon to a point where things weren’t that great so when you head into that final episode, you sort of feel like anything could happen.”

The first part of “Catastrophe’s” final season spent a lot of time making sure everything they set up in the third season, such as Rob falling off the wagon, was paid off before the end. After his drunk driving incident in the third season finale, the start of Season 4 saw him having his day in court, taking part in his mandatory community service and regaining his sobriety.

The show also had to pay tribute to Carrie Fisher, who played Rob’s mother Mia and passed away shortly after filming the third season of the show.

While Horgan says they “loved her too much” to even think about ending the show without saying a proper goodbye to the character, she also admits she and Delaney didn’t know exactly how they would handle her absence until well into writing the final season.

“It was a really, really tricky one to figure out because we wanted to make sure we did both Carrie and the character justice, and we wanted it to feel poignant and moving, and we also didn’t want to indulge in it too much,” Horgan explains. “The whole world knew Carrie had died, so there was no big surprising storyline there, so we had to find as surprising a way to tell it.”

The result was to have Rob and Sharon learn of Mia’s passing as they touched down on U.S. soil, expecting a nice family holiday. Her sudden death meant their plans had to be thrown out the window so they could throw a funeral and face more of Rob’s family, including his sister (Michaela Watkins), her boyfriend (Nat Faxon) and his father (Mitchell Mullen). The grief for the characters would be raw, but they would also be able to eulogize the character in a way that honored both the fictional woman and the real-life one who brought her to life.

“We felt really happy with where we got to with that and being able to, in the eulogy, say how great she was in the kind of caustic way she might have said herself,” Horgan says. “And in doing that, it really helped tell the story of where Rob and Sharon were at. It really helped [push] us towards that final scene.”

In the earlier seasons, Horgan admits she and Delaney would sometimes wrap and think about the things they should have said that they didn’t include, this time around, “maybe because it was the last one, we threw everything into it unconsciously.”

“As we wrote it we knew it had to be the exclamation point on our ideas that we’d wanted to express,” Delaney adds. “We really grappled with should the final one be longer, kind of like a mini movie, but ultimately we thought that would be kind of indulgent, and as such we wound up with a final episode that we’re both very happy with and proud of. I’m glad we did it that way.”