While Cassie may not know how she feels about Colton, the Bachelor clearly has a lot of feelings for her. Considering that she’s currently vacillating for all of America to see (which is totally OK and valid), what does Cassie think about The Bachelor? After hometowns, her dad became an internet fave and Colton’s recent trip to the gym may just have proven that Cassie’s the one he picks. But has Cassie indicated how her experience was on the show? Thankfully, this frontrunner is open about her feelings on social media as Colton Underwood’s season of The Bachelor comes to a close.

During Week 7, Cassie’s motives were called into question by Tayshia and Kirpa based on something Katie had said. But, with a little help from her friend Caelynn, Colton chose to keep Cassie. Then, even though her father didn’t give him his "permission" to propose and Cassie didn’t say she was falling in love with him, Colton still kept her after hometown dates in Week 8. After all, he seems to know he’s falling in love with her. So, as they enter fantasy suite week, you be wondering where Cassie stands. And no matter the outcome, it seems she is happy with her decision to participate as a contestant on The Bachelor. 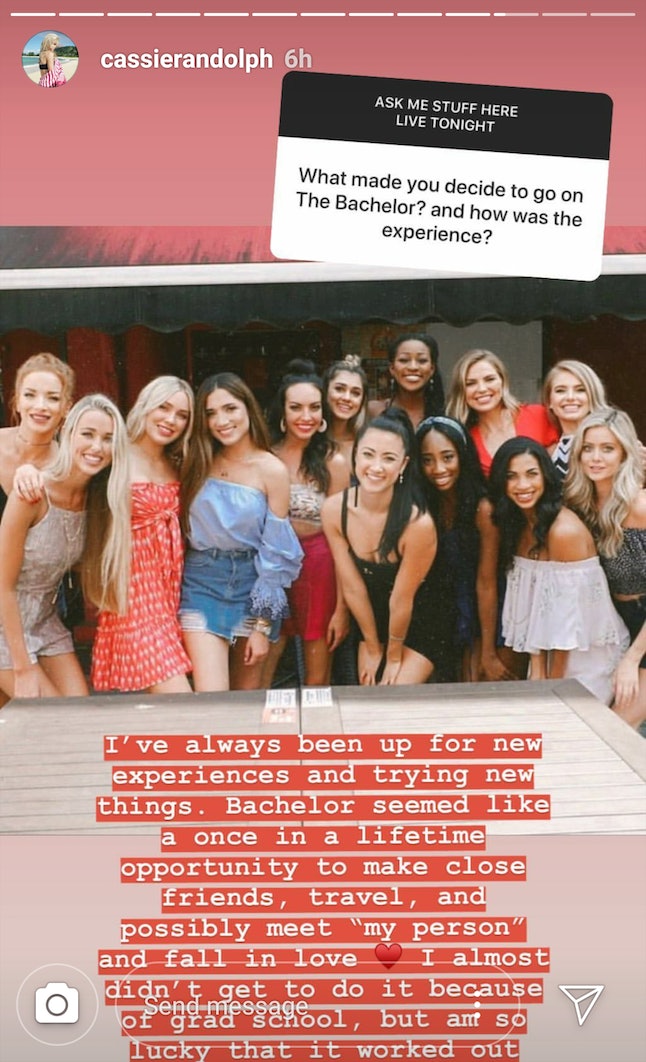 In an Instagram Story from March 3, Cassie answered some people’s questions about her life, including why she did The Bachelor and what it was like. She responded, "I’ve always been up for new experiences and trying new things. Bachelor seemed like a once in a lifetime opportunity to make close friends, travel, and possibly meet ‘my person’ and fall in love. I almost didn’t get to do it because of grad school, but am so lucky that it worked out."

Ahead of Week 9, Cassie also posted a promo video of herself talking about taking the time to explore her potential feelings of love for Colton. She wrote in the caption, "There is no way to prepare yourself for this experience and how many real emotions there are to process. It’s surreal watching yourself back and reliving what you were going through. I actually filled 3 journals cover to cover while I was gone with just about every detail of what was going through my head … 3 journals is a lot." She also added for those fans playing The Bachelor drinking game, "Take a shot. I said the word ‘journey.’"

When it comes to that surreal experience of watching herself, Cassie has been processing it more openly through her social media. She typically live tweets along with the show, which gives fans some insight into where her mind is at. And while watching the whole ordeal playback on national TV has been a little stressful for her at times, Cassie is also having fun with it.

For instance, she tweeted about how awkward it was to watch her first one-on-one date with Colton with her dad in the very same room as her. Things got steamy on their date in Thailand, especially since Colton brought Cassie into his bed. So she tweeted not only about the stress of watching the one-on-one date with her dad, but she also posted on Instagram the next week noting how relieved she was since that episode contained less intimate moments between her and Colton.

She also has commented on the stress of watching The Bachelor and tweeting about it. But, despite those anxious feelings, her tweets also include amusing gifs, commenting on funny moments that happened in the show, and thanking people who are supporting her.

She even commented on the drama that occurred between her and Caelynn and Tayshia and Kirpa in Week 7. She posted a series of pictures that featured her facial reactions on Instagram and wrote, "Mood going into tonight knowing I’m contractually obligated to stay silent." But while that post was throwing some shade, the speech language pathologist in training also made a statement about how Bachelor viewers shouldn’t bully any of the contestants and asked people to remember that they are all real people. (Her tweets also indicate how she’s still close with fellow contestants Caelynn and Demi.)

While you’ll probably never get to read her three personal journals that outlined her feelings as she went through The Bachelor, following Cassie on social media is the next best thing. And as Colton’s season dramatically comes to a close, you’ll definitely want to keep an eye for her posts.