Seventeen years is a long time in the world of television, making it all the more impressive that Spicks and Specks continues to spick and speck.

The musical quiz series hosted by Adam Hills, with Myf Warhurst and Alan Brough as team captains, returns to the ABC this month for a 10-episode run. The show first aired in February 2005, running for seven seasons until 2011, when the team pushed pause on the format. 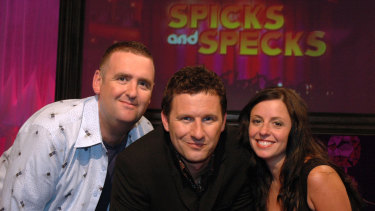 Alan, Adam and Myf in Spicks and Specks′ early days.Credit:

A series of one-off reunions and comebacks followed (plus an ill-fated 2014 reboot) before the decision was made to bring back the original cast in 2021 and again in 2022.

“It’s one thing to think we’ve done seven or eight seasons, but to realise that it spans 17 years is kind of remarkable; it does feel like a legacy,” says Hills, maneuvering his laptop to avoid a rare sliver of English sunlight ruining our Zoom call.

It’s morning in London, where Hills lives with his wife Ali McGregor and their two daughters, Maisie and Beatrice. The 52-year-old has long been a permanent fixture in the UK, hosting the popular news-of-the-week late-night show The Last Leg on Channel 4 and touring Europe as a stand-up comedian.

Despite a busy workload – “I really need to get more sleep,” he admits, stifling a yawn – you get the impression there’s nothing he would prefer to do than discuss the legacy of Spicks and Specks. 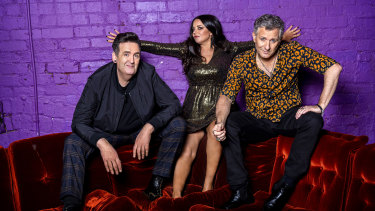 Alan Brough, Myf Warhurst and Adam Hills return for another season of Spicks & Specks on the ABC.

“I remember when we started the show in 2005, our executive producer said, ‘There will be people who grow up with this show,’ and to this day, I have people in their twenties come up to me and say, ‘I watched Spicks and Specks as a kid,’” laughs Hills.

Australians have long loved musical variety shows. From Bandstand to Young Talent Time, Countdown to Rockwiz, our TV landscape is peppered with programs that celebrate music.

“I think that is part of the secret to our success, Spicks and Specks has always been, above all, a joyous celebration of Australian music,” says Hills.

“I remember being told we were carrying the torch from Countdown, which felt like the ultimate pat on the back.” 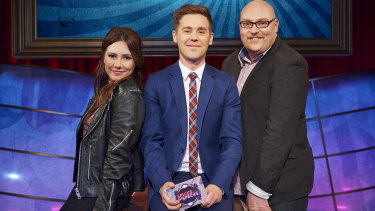 But it’s hard to deny that the dynamic between Hills, Warhurst and Brough plays a significant role in the show’s enduring appeal. The 2014 reboot saw the ABC replace the original trio with stand-up comedian Josh Earl, singer-songwriter Ella Hooper and radio presenter Adam Richards. The reboot lasted a single season before the network pulled the pin.

“I’ve no idea why the reboot didn’t take off, but I guess it made us more aware that something special happened when the three of us were on the air together,” says Hills.

“We love hanging out, and weirdly, we don’t hang out that much off camera, so there is a genuine buzz of excitement when we film.”

Spicks and Specks also seems to recognise that for a much-loved show to stay alive, it must strike the right balance between the familiar and the future. 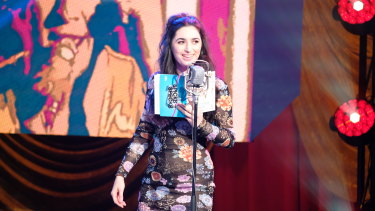 Georgia Maq of Camp Cope is one of the young musicians to appear on the latest season of Spicks and Specks.

This season sees a revolving door of recognisable faces from the Specks universe – Hamish Blake, Denise Scott, and Dave O’Neill – blended in with a new slate of talent including Emma Watkins, Dylan Alcott and Camp Cope’s Georgia Maq.

“Georgia was one of my favourites; her parents were friends with our original set designer, so she used to come to tapings after school. She literally grew up with the show.”

For up-and-coming bands like Camp Cope, two years of a pandemic has decimated their ability to make a living and Hills believes Spicks and Specks has to provide a platform to those impacted by COVID-19.

“As the Australian live music scene slowly gets back on its feet, we want to give the whole industry a leg up by showcasing some of the best new musicians Australia has to offer,” he says.

Keeping one eye on the future is crucial to Spicks and Specks’ relevancy, and while 52-year-old Hills slots neatly into the Double J demographic, he has a secret weapon.

“Thankfully, I’ve got a 12-year-old daughter who keeps me up to date; I found that so often when we were making this series, I’d be talking about various artists, and people in the office would go, ‘Who?’” he says.

“My wife and I took our daughters to Glastonbury festival this year, and they had a longer list of bands they wanted to see than we did; I ended up at Girl in Red, Mitski and Olivia Rodrigo.”

As the morning bleeds into the workday, duty calls for Hills. In the week leading up to our interview, UK Prime Minister Boris Johnson resigned, providing plenty of fodder for his team at The Last Leg.

Meanwhile, the most recent season of Spicks and Specks was filmed during the Australian federal election, meaning Hills was able to vote in person and sample a democracy sausage.

“I had two actually because I was away for the last vote,” jokes Hills.

“It was fascinating to watch both [events] from afar and then both up close, the rise and fall of the populist leaders, you know, ‘the person you want to have a beer with,’ no surprise they’ve all fallen from grace around the same time.”

“Now the question becomes, do the people replacing them live up to the promises they’re making, and what will their legacy be?”

If anyone understands the importance of legacy, it’s Adam Hills.