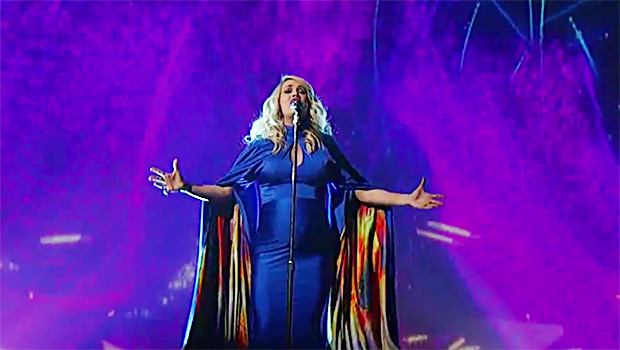 Carrie Underwood put her adorable baby bump on display as she serenaded the crowd at the CMA Awards in Nashville on November 14! Watch it here!

Carrie Underwood, 35, pulled double duty at the 2018 Country Music Association Awards on November 14 from Nashville, Tennessee. Not only did she host the show, but she performed her hit song, “Love Wins” and nailed it — all while pregnant! The singer, who is nominated for two CMAs tonight (Female and Music Video “Cry Pretty”), looked stunning in a blue dress with a matching cape that featured a multi-colored design on the inside. She finished off the beautiful performance by holding up her hands put together into the shape of a heart.

Carrie looked absolutely radiant, sporting her baby bump at the 2018 awards show. While she showed off her bump on the red carpet, Carrie has admitted that this pregnancy has been more challenging on her body that her first. The singer has a 3½-year-old son, Isaiah Michael.

“It’s definitely different than the first time,” Carrie confessed back in October. “When they say every pregnancy is different, it really is. Just different symptoms. I feel like this one is just a little harder on my body for some reason. But it’s been really good.”

Carrie and her husband, NHL star, Mike Fisher announced they were expecting their second child together in August. And, they’re more than ready for baby to arrive! “We have picked out a name, but we’re keeping that to ourselves right now,” she revealed. “We’re fixing to move. I haven’t bought anything yet, we still have some of the stuff, cribs and stuff from my son, but we’ll figure it out. We’re about to move so I’ll start buying stuff once we’re there. It’d be pointless to buy it and then move it.”