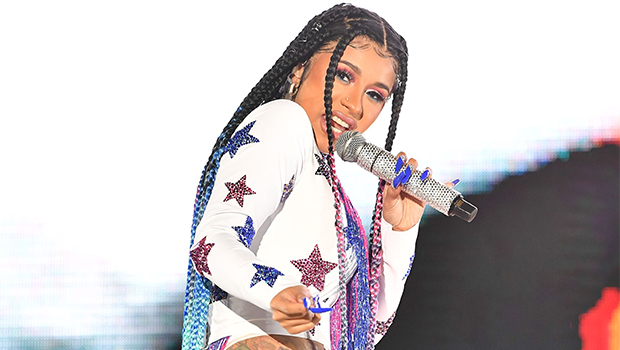 Jenny Bui is the woman responsible for Cardi B’s long, Swarovski crystal-incrusted nails. She tells HollywoodLife that despite her inches-long ‘blinged-out nails, the rapper has no issue performing, eating or most importantly caring for Kulture!

Most celebrities have their “thing.” — Whether it’s a signature lip color or hairstyle, some of Hollywood’s hottest stars are known for a signature style staple that is part of their identity. Cardi B‘s is her nails. The “Press” rapper is never seen without her bright, Swarovski crystal-incrusted nails, thanks to her go-to manicurist Jenny Bui, a.k.a. “The Queen of Bling”.

The New York-based manicurist, who Cardi’s been going to every six weeks for the past six years, gave us the scoop about the rapper’s nails. “No, it’s not hard for her with Kulture,” Jenny said when asked if it’s difficult for Cardi to do everyday activities such as changing diapers or eating, with her long nails. “She still loves her long nails, you know, she’s had her long nails since she’s 14,” Jenny explained, adding, “She’s used to it.”

Celebrities including Khloe Kardashian have opened up about being critcized for keeping their long nails after childbirth. The Keeping Up With The Kardashians star actually fired back at those who mom-shamed her for having long nails in February. “It’s annoying when people talk about my nails. Trust me, I manage just fine. The same way I take care of myself, I take care of my baby,” she tweeted.

Jenny went on to explain that she doesn’t work with Cardi’s stylist(s) too often, as the rapper trusts her work. “She let’s me do whatever I want to do. She tells me, ‘Jenny, you do whatever you want,” the manicurist said. However, when the rapper does need to coordinate her nails with an ensemble, she’ll “just give me one color and I put on the color, and the bling I create myself.”

The owner of Jenny’s Spa and Nails on 7th Ave in the Bronx is responsible for Cardi’s nails in her “Money” music video and her manicures at the Met Gala and in her Pepsi Super Bowl commercial. In order to complete some of the intricate looks, Jenny admits that she sometimes has to travel with Cardi and her team. But, Cardi “knows I have a family, so she comes to me a lot,” she said. The rapper will often share videos of the Bronx nail salon when she’s in New York for a manicure.