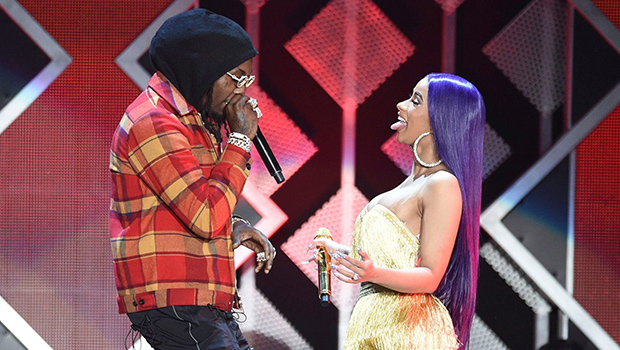 Cardi B and Offset shocked everyone when they reunited, after weeks of the rapper trying to publicly win back his love. Here’s what we know about their rendezvous!

Offset’s shocking public display of affection for his ex Cardi B may have worked at Rolling Loud Music Festival, because the two were spotted jet skiing together in Puerto Rico! Just two weeks after Cardi announced that she and her husband were going separate ways, the pair may have already reconciled, as a source tells HollywoodLife.com EXCLUSIVELY that they’ve really been missing each other. “Cardi could not stay away from Offset. They have undeniable chemistry and she really missed him a lot. Offset has been calling, texting and hitting Cardi up constantly, all day, everyday, begging for her to take him back. She felt bad that he was trying so hard, asking for forgiveness,” the insider said. “But things are still very much in limbo. While it feels good for Cardi to be back in his arms, for the holiday with her small family together, Cardi has not made any major decisions to take him back for good.”

Of course, Offset has made it very clear that he misses his wifey, taking to all the social media platforms to confess his love for her, even going as far as interrupting her headlining performance at Rolling Loud last week. “Yes the whole Rolling Loud thing didn’t go as planned but it didn’t totally backfire because it did get them talking more,” a second source added. “The way Offset got so bullied and attacked also helped him gain a lot of sympathy points from Cardi. She flew into protective mode. It really hurt her to see him being hurt and that also melted some of her anger. It’s still a work in progress but the feeling amongst her people is that they‘ll officially a couple again before the year ends.”

This definitely comes as a surprise, though, since Cardi has taken to social media multiple times to share her anger toward Off, after he was accused of cheating on her, even allegedly having a threesome with rappers Summer Bunni and Cuban Doll. “I only got one birthday wish and that’s to get my wife back Cardi. We’re going through a lot of things right now, a lot of things in the media. I want to apologize to you Cardi. I embarrassed you. I made you go crazy,” Offset begged in a video posted on Dec. 14. “I was partaking in activity that I shouldn’t have been partaking in, and I apologize. You know what I’m saying? For breaking your heart, for breaking our promise, for breaking God’s promise and being a selfish, messed up husband.”

We’ll have to keep an eye on these two and their Puerto Rican reunion! HollywoodLife has reached out to both Offset and Cardi’s teams for comment.