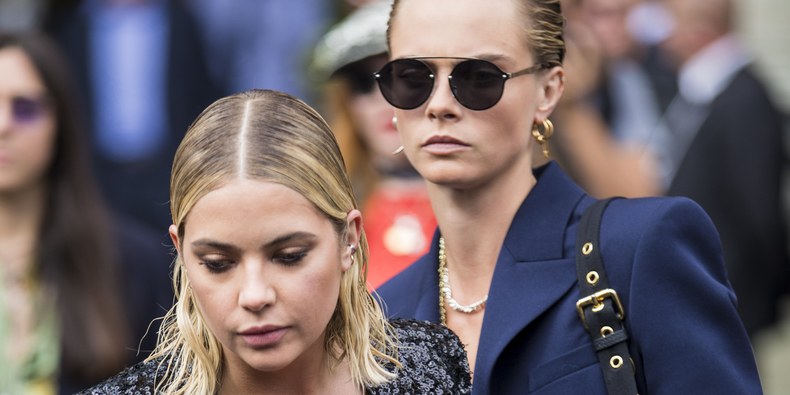 Fame certainly has its downsides and having your relationships play out with no privacy is one of them, as Cara Delevingne and Ashley Benson know first-hand. The are-they, aren't-they-a-couple has shied away from attention ever since they were first rumored to be romantically involved back in August, but — despite the fact that they haven't been able to fully dodge the media's attention and stories like these — they reportedly couldn't be doing better. In fact, in a year full of breakups, Delevingne and Benson may be the only celebrity couple no one should be worrying about.

According to the latest update on their relationship, the pair are “very happy” with how things are going. “Ashley and Cara are dating. This is the first girl she’s ever dated,” a source told Us Weekly, even though neither of them have yet to confirm their relationship, nor has Benson commented on her own sexuality — a subject that should really only ever be talked about by the individual being talked about. “This relationship with Cara is the first time she’s been in a healthy relationship and she feels as if it’s really easy with her.”

Still, it's pretty heart-warming that the pair are rumored to be in bliss. They definitely have an enviable chemistry that comes across in their photos and social media interactions. So far, that has included photos that surfaced of the pair kissing at an airport in London and someone commenting "Mine" on photos of Delevingne under Benson's account (though she later denied it was her and said she was hacked). Even so, Delevingne recently commented on Benson's post in an adorable way. When Benson posted a photo with the quote "You are magic," the model replied publicly, "Yes you are."

There's also the fact that Benson has been seen wearing a necklace with a "C" initial on it, presumably as a nod to Delevingne. Then, last month, Benson showed up at Paris Fashion Week to sit front row for Delevingne's return to the runway at Balmain. (It has previously been two years since she walked in a show; her last one was Christopher Bailey’s final Burberry show during London Fashion Week.) Whatever the case is with these two, they certainly seem happy and — for that reason and their disdain of attention as Delevingne recently showed by wearing a stuffed animal as a face mask to avoid pictures — we should all go ahead and let them live without comment.

Cara Delevingne walks the runway during the Balmain show as part of the Paris Fashion Week women’s wear spring/summer 2019 on September 28, 2018, in Paris, France. Photo courtesy of Getty Images.