For local fans who came of age in the mid-'90s heyday of Leon Trimmingham and Robert Rose, the promise of live basketball on free-to-air TV has been one of steady disappointments; the legacy of broadcasters like Bill Woods and Steve Carfino dissolving to a story of commercial oversight and half-hearted scheduling.

With the NBL's anticipated new season set to launch on Thursday, SBS are eager to change the narrative. 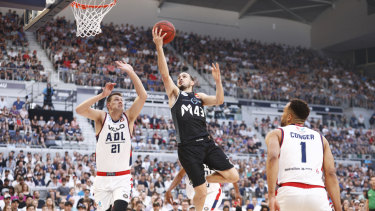 SBS is committing an unprecedented amount of live broadcast time to the NBL this season.

"Since the '90s, it's struggled to really gain traction. Then the quality of the league deteriorated and the media interest also declined," says SBS's director of sport Ken Shipp. "But right now it does feel like the perfect storm."

Earlier this month, the public broadcaster unveiled its multichannel SBS Viceland as the new free-to-air home of the NBL for the next two years, after a three-year deal with Nine – last season's broadcasters and owner of this masthead – was binned.

SBS's plans for the NBL are lofty: 67 games broadcast live on SBS Viceland – an 86 per cent increase on the free-to-air offering drip-fed by Nine's 9Go last year – and all 126 games available live and free on its streaming platform SBS On Demand. It follows on from SBS's announcement to also show two live NBA and two live WNBA games a week on the channel.

To think that a free-to-air broadcaster, and a public broadcaster at that, has the rights to show the entire league live is almost unheard of.

"We recently lost some of our key football rights, and I was looking for something that could replace that, and I think basketball as a global sport is something that makes a lot of sense for us," says Shipp.

"For me it's about doing the things that nobody else is doing; SBS is here to provide access for the kind of sports that people wouldn't see otherwise. There's a distinct lack of coverage around basketball, and I'm really proud we're bringing it here."

Firstly, the coming NBL season is drawing unprecedented attention. Alongside the return of NBA star and last year's NBL most valuable player Andrew Bogut to the Sydney Kings, the season sees the professional debut of next year's projected No.1 NBA draft pick LaMelo Ball, whose pre-season lace-up with the Illawarra Hawks in Tasmania drew massive hype from US sportswriters last week. 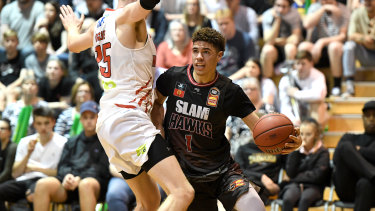 Drawcard: LaMelo Ball in action for the Hawks during the NBL Blitz.Credit:Getty Images

The season also comes on the tail of the Boomers' top-four finish at the recent FIBA World Cup, which included a giant-killing win against the US team in a pre-tournament friendly, as well as ongoing interest in the fortunes of homegrown NBA stars like Ben Simmons and Patty Mills.

"It does feel like everything's sort of aligning," says Shipp of local interest in the sport. "There's no question that when you think about other sports in this country that are just sort of in decline, this one's just doing the complete opposite and just growing and growing in popularity."

The deal, like its previous arrangement with Nine, has the NBL handling production costs and forgoing a rights fee, indicating that NBL owner Larry Kestelman – recently dubbed by ESPN as "the man who saved Australian basketball" – understands that free-to-air coverage is key to growing and maintaining the sport's interest here.

"We've got our own costs, obviously, for the delivery and transmission of the product, and we're creating some bespoke content for on-air, On Demand and social," says Shipp. "But the deal is really unique. I don't think there's been a deal like this for many, many years.

"To think that a free-to-air broadcaster, and a public broadcaster at that, has the rights to show the entire league live is almost unheard of."

Shipp says he was impressed by Kestelman's vision of the NBL as a "breeding ground" for NBA players, which includes the Ball coup as well as fellow top-five draft prospect RJ Hampton, who will play for the New Zealand Breakers this season as part of the league's Next Stars program.

"For me, obviously since [Kestelman's] time in the sport and his investment, I've seen the popularity of this sport grow, and I've seen the quality of the league improve, and it felt really right."

Does he believe SBS can finally make the NBL a local TV hit?

"We're going to give it our best shot. Quite sincerely, we've made a commitment to Larry to do everything we can to support the league. Let's put it this way: if we don't, I'll be surprised."

The NBL launches live on SBS On Demand on Thursday, and on SBS Viceland on Saturday.