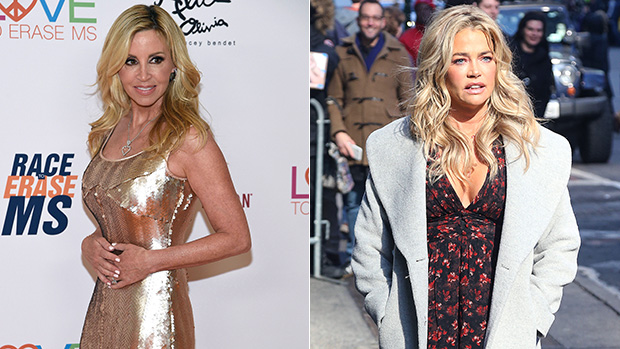 Camille Grammer ‘thought she amends’ with the women of ‘RHOBH’, until Denise Richards called her ‘inappropriate’ for hashing up Dorit and PK’s finances this past season. Camille is trying to ‘move forward,’ but she thinks Denise was wrong to critique her.

Camille Grammer, 50, caught wind of what Denise Richards, 48, said about her during an appearance on Heather McDonald’s “Juicy Scoop” podcast on July 15. And, while she’s focused on her own life after her recent nuptials to husband David C. Meyer, she couldn’t let Denise’s comments go unnoticed. “Camille feels that it’s been such a long time since the dinner, where she mentioned Dorit & PK Kemsley’s finances, happened. She’s already sincerely apologized about everything that was said,” a source close to Camille tells HollywoodLife, EXCLUSIVELY, adding that “Camille felt really bad about the entire situation and realizes she crossed the line at the time.”

The RHOBH dinner scene recently aired, therefore, Camille understands why Denise would would discuss the ordeal. However, “to still be questioning her and seeming so upset over it seems out of line to Camille,” the insider admits. “It was Camille’s impression that she had made amends with the women to a certain degree so she could move on. Now, she’s just trying to move forward.”

Incase you didn’t catch Denise’s recent podcast appearance, the RHOBH star slammed Camille for hashing up Dorit Kemsley’s personal finances on the Bravo series. “I didn’t understand why she was coming for Dorit. What do her finances have to do with them mentioning her wedding? It was out of left-field. That’s why I didn’t understand. Like, where is this coming from?” Denise told on Heather McDonald, adding that Camille’s actions were “inappropriate.” Denise continued: “It shouldn’t have been discussed at a table with all of us. And it had nothing to do with what they were all talking about.”

During the June 25 episode of RHOBH, the ladies were all bickering about how Lisa Vanderpump, who has since quit the show, skipped Camille’s wedding. However, the conversation shifted when Camille question Dorit about her and her husband’s finances. — Hence, Denise telling Heather that the women weren’t even discussing Dorit and PK at the time, let alone their finances.