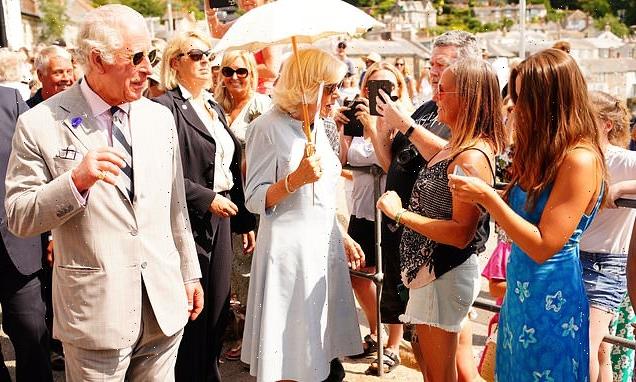 Shady lady! Camilla, 75, carries a parasol to shade herself from the blistering heat as she steps out in Penzance with Prince Charles while temperatures reach record highs

The Duchess of Cornwall showed she was prepared for the scorching hot weather as she stepped out in the south west this afternoon.

Camilla, who celebrated her 75th birthday on Sunday, paid a visit to the village of Mousehole in Penzance with Prince Charles – and she was taking no chances with the record-high temperatures.

The Duchess was pictured carrying a white parasol to shade herself as she greeted people alongside Charles, 73. 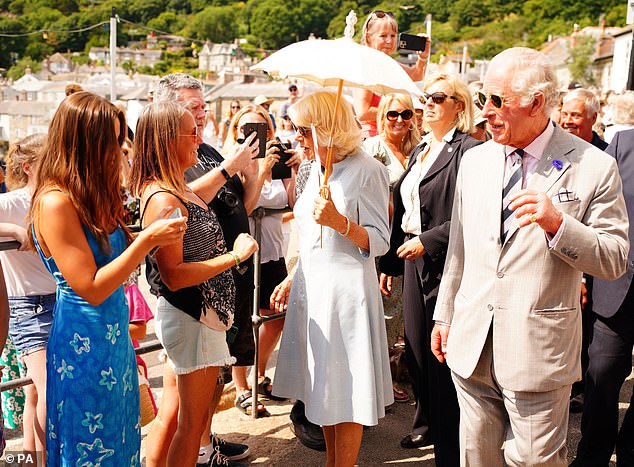 Prepared for anything! The Duchess of Cornwall, 75, carried a parasol as she greeted people under the blistering sun in Penzance this afternoon 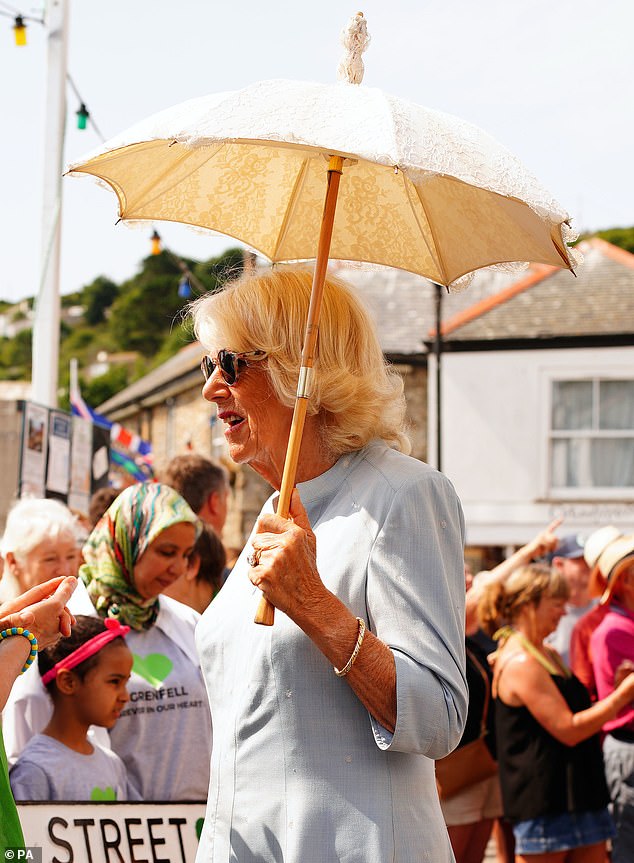 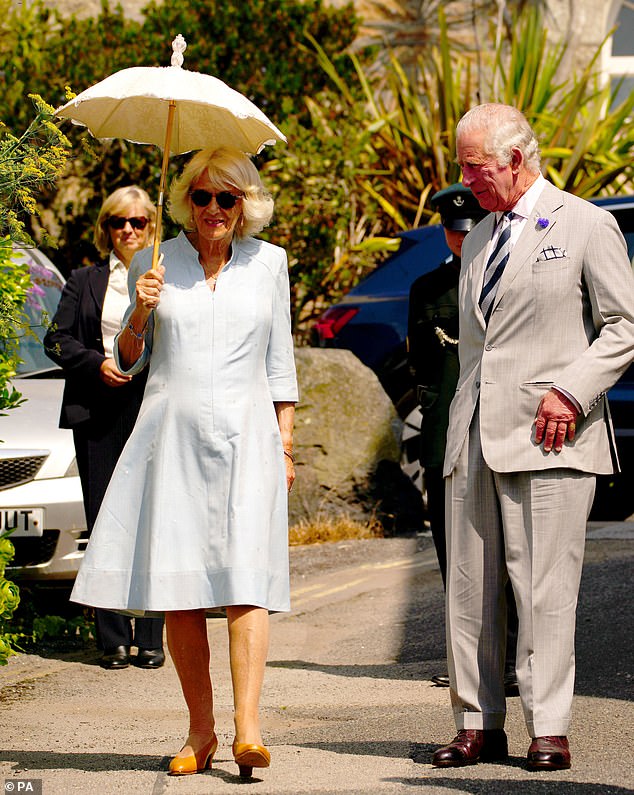 Camilla looked prepared for all the elements as she stepped out carrying the parasol, which complemented her light blue dress perfectly as she walked along with Charles

Showing she had considered style as well as practicality, the parasol provided the perfect accessory to her duck-egg blue dress – which was made of cool linen.

The Duchess recycled long-sleeved linen dress which she has worn several times before – including on last year’s royal tour of Devon and Cornwall.

Meanwhile Prince Charles, kitted out in a smart suit and sunglasses, looked as though he wished he’d thought to bring his own gadget to shade himself.

Charles and Camilla are exploring Devon and Cornwall on the first day of their official visit to the south west of England.

The future king and queen consort have picked an opportune time to visit the British coastline as the nation finds itself in the grip of record-high temperatures. 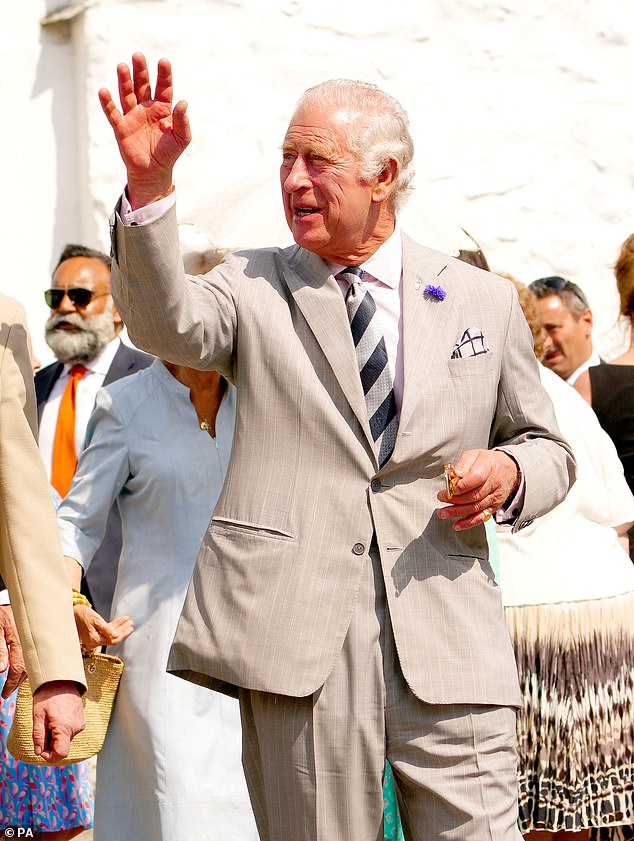 Charles seemed unfazed by the heat as he waved to people in the village of Mousehole, Penzance 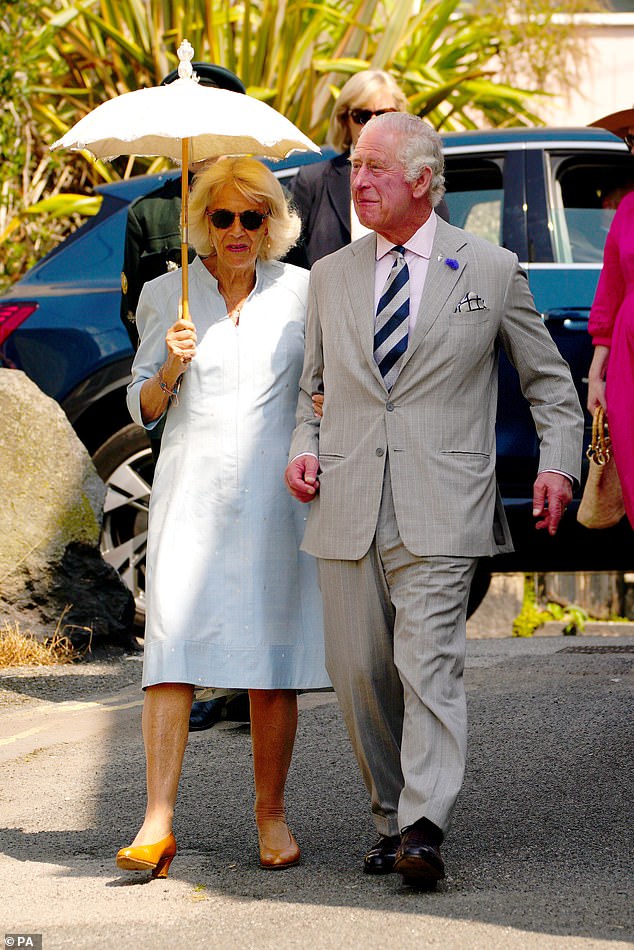 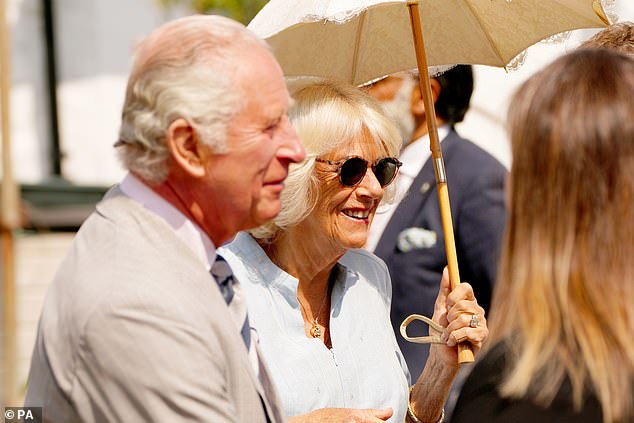 But it seems the royal couple may have dodged the sweltering heat of 40C (104F) predicted in some parts of the country, with temperatures in Penzance predicted to hit highs of 31C (88F).

Nonetheless the Duchess came prepared for what is still uncharacteristically hot weather in the UK, making sure she didn’t catch too much sun.

As she met with residents of the town, Camilla took time to speak to people wearing T shirts remembering the 72 people who perished in the Grenfell Tower fire in 2017.

Camilla, who has just celebrated her 75th birthday, gave the British public a rare glimpse into her private life in an intimate ITV documentary last week.

Camilla’s Country Life followed the Duchess as she guest edited an issue of Country Life magazine to commemorate her landmark birthday. 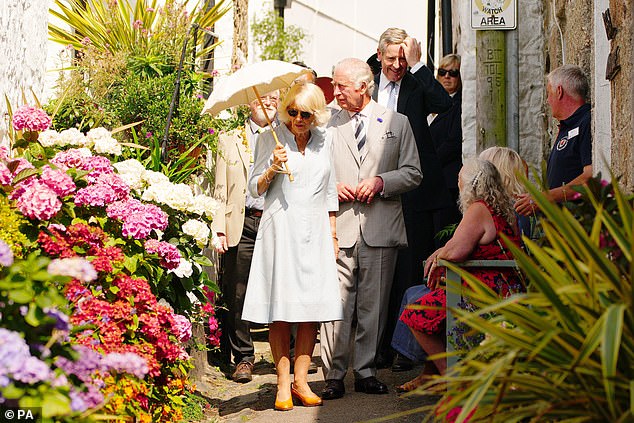 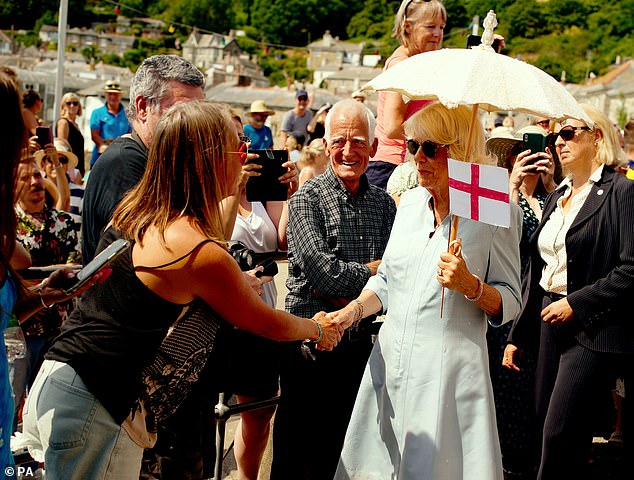 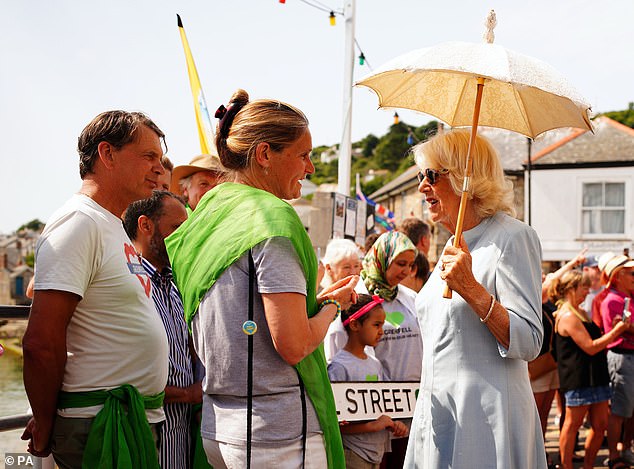 While taking charge of the magazine Camilla made sure to cover topics that were important to her.

Her rescue terriers, Beth and Bluebell, had a prime spot within the pages of the issue as the Duchess paid homage to Battersea Dogs and Cats Home, of which she is a patron.

Camilla also commissioned a feature in the magazine on the issue of domestic violence, which she says is just as prevalent in the countryside as it is in big cities.

The Duchess, who is patron of the Safe Lives domestic abuse charity, has spoken out in the past about the scourge of domestic violence – and coercive control in particular.

Speaking to Mail+ ahead of her birthday, she said: ‘You can have someone who appears such a charming individual, that nice, smiley man who is lovely to everybody… to your friends, to your family… And we all know one, don’t we?’