Community and union groups are calling for the Morrison government to refund superannuation funds withdrawn by low-paid workers in hard-hit female industries to cover household expenses.

The push is part of a list of demands, including free childcare and early childhood education, to be put by a coalition of groups including White Ribbon, the YWCA, the Police Association of Victoria and Women's Health Victoria. 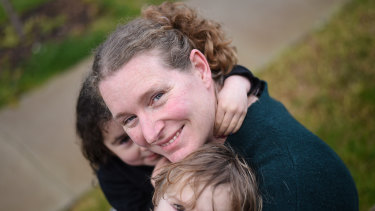 Early childhood worker Amanda MacGregor is concerned her steep drop in income may mean her family needs to sell its home.Credit:Justin McManus

More than 30 community and union organisations are demanding the federal government and national cabinet urgently intervene to address the worsening economic conditions of working women during the COVID-19 pandemic.

The demands came as women described the dramatic impact the loss of income and hours has had on their families, including Melbourne early childhood worker Amanda MacGregor, who fears she may have to sell her home to stay afloat financially.

Research by the McKell Institute found after a 7.1 per cent decline in the number of Victorian women in jobs since March 2020 and given job losses among women were five times the rate of those for men in July, recent policy decisions meant disproportionate economic impacts on women were likely to "accelerate".

However, "a mix of poor policy design and ill-considered decisions"– including early access to superannuation, cessation of free childcare and ending JobKeeper in early childhood centres – had affected or would affect women across the community.

These policies "may leave more women in poverty in their retirement", the McKell research found. More Victorian women than ever were unemployed and women were more likely to have casual or insecure work.

"The fastest growing cohort of homeless is older women who are at retirement age," said Victorian Trades Hall Council assistant secretary Wil Stracke. "I'm very concerned about the generation of women 10 to 15 years away from retirement who are not going to have time to earn that money back."

Women's Health Victoria chief executive Dianne Hill said women were more likely to have lost jobs, be working on the front line as essential workers, to have taken on additional caring responsibilities and to have accessed superannuation to meet basic needs.

"The exacerbation of social and economic inequalities for women is leading to emotional, social and financial stress, anxiety and other mental health concerns for women, and a reported increase in intimate partner violence," Ms Hill said.

"We must seize the opportunity … to tackle these inequalities and build a more gender equal society."

Make It Free, a lobby group of women-led businesses launched this month to campaign for the reintroduction of free childcare, has also had 130 businesses sign on. The leadership organisation Chief Executive Women has also called on the federal government to do a comprehensive overhaul of childcare to make it cheaper and more accessible.

Amanda MacGregor an early childhood worker in outer Melbourne, said her hours had dropped from about 40 a week to 15 from August 10 because of lower demand during Melbourne's latest lockdown, meaning her pre-tax wage will be just over $350 a week.

"It's great that I'm employed … but without guaranteed income, I am so scared that in not too much longer we are going to have to sell our home at huge loss and try to find somewhere for a family of four and their dog, because we will not be able to afford the mortgage, food, power, water, rates," she said.

"I've never wanted handouts … but looking down the barrel of an almost empty bank account and very little support coming in from the government, I am equally furious and heartbroken that we are told we are priceless, when in reality [we are being treated] as worthless.

The most important news, analysis and insights delivered to your inbox at the start and end of each day. Sign up to The Sydney Morning Herald’s newsletter here, to The Age’s newsletter here and Brisbane Times‘ here.