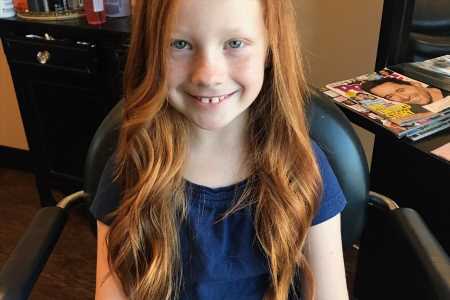 A young girl from Northern California was electrocuted while swimming in a pool earlier this month, and now her family is warning parents in the hopes of keeping other children safe this summer.

According to CBS Sacramento, 9-year-old McKenzie Kinley was swimming in her father’s pool on July 14 when she came into contact with an underwater light that was being repaired. Because the light wasn’t properly sealed, McKenzie was electrocuted when exposed to its current.

At the time, her father, Cliff Kinley, had left for an errand, and his girlfriend — who was supervising in his absence — called to tell him that firefighters were trying to revive his daughter. They were unsuccessful.

“It was the most devastating phone call I’ve ever received,” he recalled to CBS.

McKenzie was in the pool with four other people at the time, including her younger sister and three friends, and none of them were harmed.

While remembering his daughter, Cliff told the news station that McKenzie was outgoing and loved to be active.

“Swimming, fishing, camping made her happy,” he said. “That’s what her life was about.”

McKenzie’s mother, Lisa Moore, added, “She was just a lot of everything.”

McKenzie was a cheerleader at her school and loved to play soccer. Her friend, Aaron Hernandez, 12, said she was friendly with everyone on campus.

“She was just so kind and loving, and she could be friends with anyone that she met no matter what,” he told KCRA. “No matter what their differences were. She would always find a way for them to be friends.”

Her parents now want to raise awareness for pool safety in the hopes of keeping other families safe.

“If nothing comes from losing my daughter, at least this could save others,” Moore told CBS.

A GoFundMe has been set up to help with funeral cost and financial support and has raised more than $18,000 in two weeks.

“We are completely shaken and in shock that this could even happen and to take a beautiful little girls life away is unimaginable,” reads a description on the page. “She was the light of everyone’s lives around her. Her bright personality, silly attitude, intelligence and beauty inside and out contributed so much to the happiness of her family and friends. She was brave.”

“This should have never happened — she was taken far too soon and was never given a chance to really show the world what she could do with it,” the page continues. “She shined so bright.”