It’s safe to say that the peppermint flavor is having a *moment* right now. Sure, it’s officially the holiday season, which means a surplus of peppermint snacks are to be expected. However, I’ve never seen so many pink milkshakes until this year. Burger King recently hopped on the peppermint bandwagon with a new dessert that’ll make your holidays so much sweeter. So if you’re craving a refreshing dessert when you’re done with your Whopper, look no further than Burger King’s Peppermint Oreo Shake. Between its Oreo cookie pieces and peppermint flavor, it’s the holiday treat you won’t want to miss out on.

Burger King officially released the pink-hued dessert on Thursday, Nov. 29, which means you can take make a BK trip and try one immediately. According to a Burger King spokeswoman, the drink will be available through the end of the year (!!!). However, once you learn how it’s made, you definitely won’t want to wait that long to try it. Per Burger King, the Peppermint Oreo Shake is made by mixing BK’s "Velvety Vanilla Soft Serve" with peppermint syrup and Oreo cookies. Then, a dollop of whipped cream is placed on top to give the shake a little extra sweetness.

The finished product is a pink peppermint-flavored milkshake with chocolatey Oreo cookie pieces mixed into the ice cream. YUM. 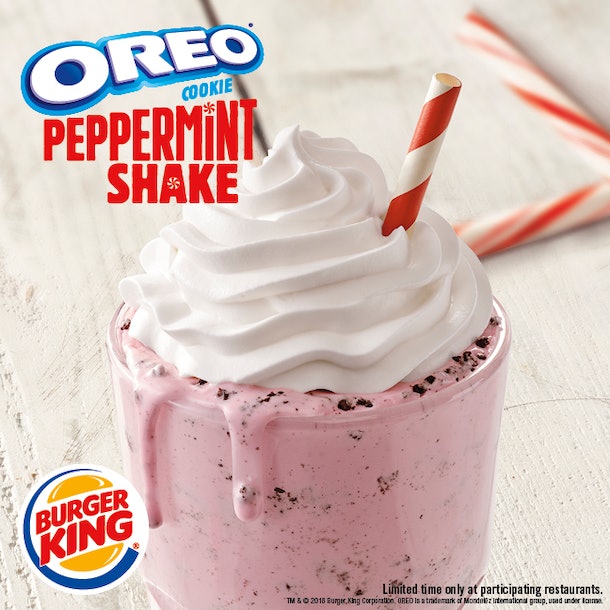 Not only does BK’s Peppermint Oreo Shake sound delicious, but it’s also super cheap. According to Burger King, the recommended price for the shake is only $3.29. When you think about it, that’s probably less money than you’d spend on your daily coffee run. If you’d rather splurge on the holiday shake than a cup of coffee or two, find the closest Burger King location to you and order up. Again, this seasonal dessert will only be available through the end of the year.

If you end up trying the Peppermint Oreo Shake and loving it, you can try the other peppermint-flavored desserts that have already been released for the holidays. For example, Chick-fil-A’s Peppermint Chocolate Chip Milkshake is currently available, which is a mixture of ice cream, peppermint, and chocolate chips. Like Burger King’s Peppermint Oreo Shake, it’ll only be available through the end of the year (until Jan. 5, to be exact). 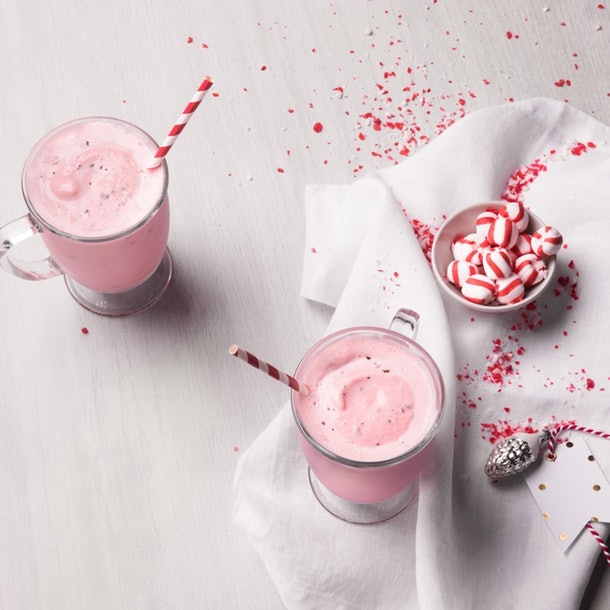 If you’re in the mood for a peppermint-flavored dessert that isn’t exactly a milkshake, you can check out Dairy Queen’s Candy Cane Chill Blizzard. According to DQ, the holiday blizzard features actual candy cane pieces amongst chocolate chunks that are blended into vanilla soft serve. In other words, you’ll get peppermint and chocolate flavors with every creamy spoonful. Like the previous desserts mentioned, the Candy Cane Chill Blizzard will only be available for a limited time.

Between Burger King’s new Peppermint Oreo Shake, Chick-fil-A’s Peppermint Chocolate Chip Milkshake, and Dairy Queen’s Candy Cane Chill Blizzard, you have plenty of options to indulge in peppermint-flavored desserts. However, don’t wait too long to grab a spoon (or straw) and dive in — because they’ll only be around for the holiday season.