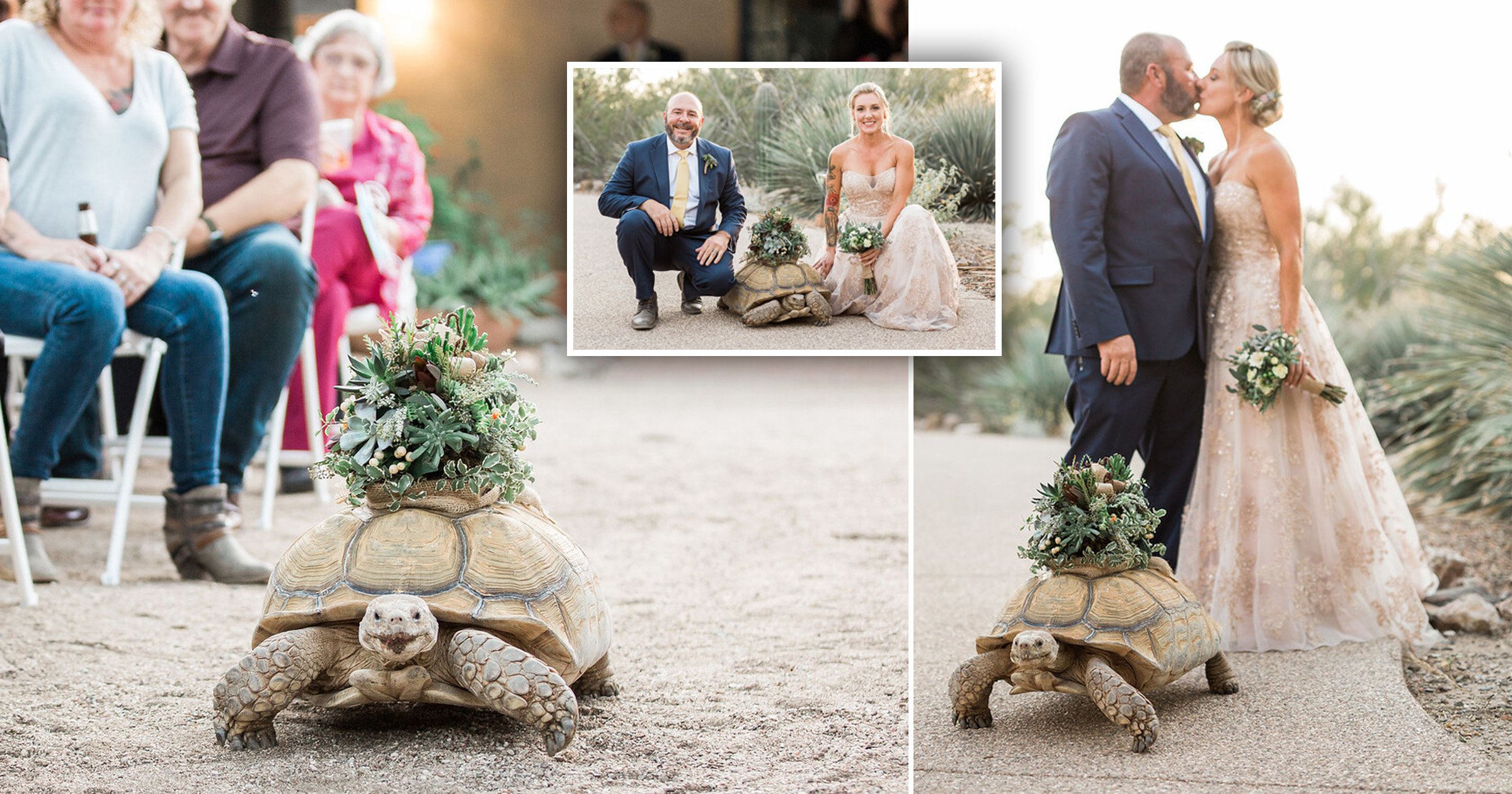 It’s always cute when pets are incorporated into weddings.

Usually that’s a dog popping up in the photos or perhaps a cat acting as a slightly disruptive flower girl.

Couple Ericka and Jay Johnson went for something a little different for their big day: hiring a tortoise as the ring bearer.

The end result was pretty adorable, but it did mean the newlyweds experienced the ‘slowest walk down the aisle in history’, according to the bride.

Vets Ericka and Jay Johnson first met while doing a wild tortoise survey 20 years ago, so felt it was only right for their beloved Sulcata tortoise, Tom Shelleck, to be in the wedding.

The 41-year-old bride said that strawberries were dotted down the aisle for ‘always hungry’ Tom to follow.

The creature slowly crept down the aisle last year at Tohono Chul Botanical Gardens, Arizona, US.

The mum-of-one said that despite concerns he may nibble the painted toenails of guests – mistaking them for fruit – the walk went smoothly and he became the ‘centre of attention’ on the big day.

Photos show the 20-year-old reptile creeping down the aisle following a trail of fruit while bearing the couple’s rings on a floral basket attached to his shell, before posing alongside the bride and groom in their portraits.

Ericka said: ‘He could have had the slowest walk down the aisle in history.

‘We were timing him when we’d practice to see how long it would take and we ended up having to have two songs played so that we’d have enough time, and we still almost ran out of songs.

‘The only thing we were worried about was if ladies had painted toenails and he’d look at them and think they were fruit and maybe get off track and bite some toes, but fortunately that didn’t happen.

‘I was proud of how he did. I think he did great and we’re really happy with how everything went.

‘A lot of people were talking about it and we made some funny jokes like “the bride is supposed to be the centre of attention but it’s the ring bearer”.

‘The day after the wedding I had several people text me like “hey, do you have any pictures of Tom?”‘

It took around three minutes for Tom to get down the aisle – while it took everyone else a matter of seconds.

A photo of Tom alongside Ericka and Tom has amassed more than 1,680 likes, comments and shares online.

Ericka said: ‘Jay and I are both exotic animal veterinarians and tortoises have always been at the centre of what brought us together.

‘When it was time for him to go down the aisle I had my twin nephews place strawberries down for him to follow.

‘He started at the end of the aisle and went and grabbed the strawberries in a row and once he was to the front in the wedding the officiant took the rings off the little arrangement that was attached to the back of his shell.

‘He eats mostly hay and dry things like that because he’s a desert-adapted species so he’s not supposed to eat a lot of fruit but since he loves strawberries so much we knew it was a surefire way to get him to go down the aisle.’

Is there anything as sweet?