The National Tertiary Education Union is negotiating through Easter with universities on deals likely to temporarily trade pay and conditions concessions for greater job security as the sector faces a mammoth funding shortfall.

But staff in one of the unions' most active and confrontational branches say it has been too quick to offer concessions despite the universities' dire financial state. The union's leadership argues negotiations are essential to get staff and their employers through a disastrous period. 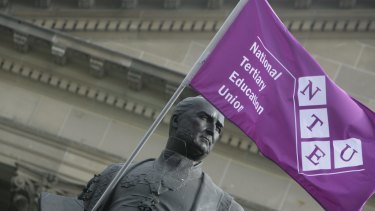 The National Tertiary Education Union is trying to protect staff jobs after universities revealed their finances had taken a multibillion-dollar hit from coronavirus.Credit:Paul Jones

Prominent Australian universities have lost billions of dollars in student fees as student enrolments plummet because of the coronavirus and international travel restrictions.

In an email to members on Wednesday, the union said it was considering measures it "would never normally consider" to protect jobs, including the "deferral of pay rises, providing the ability to direct taking of leave, or other cost saving measures".

At a meeting on Thursday 117 members from the union's University of Sydney branch, long its most activist, voted up a motion censuring the national union for starting negotiations "on significant concessions" and called for greater transparency and engagement with rank and file members.

Just two people voted against the motion at the Zoom meeting, though more abstained.

Alma Torlakovic, who moved the motion and emphasised she was speaking only as an individual unionist, said the union should not be bargaining away hard-won concessions and that universities should borrow or pressure the government for money to pay staff instead.

"The conditions that are won at Sydney University set the standard for the rest of the sector so it’s extremely important that we maintain and improve those wage and conditions," said Ms Torlakovic, an administrative staff member.

No other branch has passed a similar motion to Sydney's, though union sources who declined to be named said there were similar concerns at universities in Melbourne, particularly among more hardline members.

Alison Barnes, national president of the NTEU, said the union was fighting to protect tertiary education institutions and staff and it was natural the issue would attract debate among members.

"All NTEU members have always been committed to fighting for our sector, our conditions and fighting for a rescue package," she said. "And I suppose the best way to do that is always going to be a subject of debate and that's a good thing."

Dr Barnes said the government needed to come up with a rescue package tailored for the specific needs of universities and other tertiary education providers.

Universities have warned of job cuts as a result of the pandemic and called on the government for more funding. The sector employs thousands of casual workers, typically on contracts shorter than necessary to get JobKeeper.