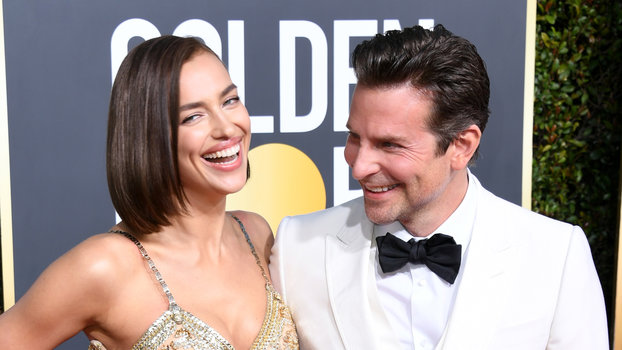 Awards season is set to be a big one for Bradley Cooper. So big, in fact, that his longtime girlfriend, Irina Shayk is coming along for the ride. Seeing the two together is a rare occurrence, indeed, but it looks like the supermodel is set to be a red carpet regular thanks to Cooper’s A Star is Born racking up multiple nominations. The two stepped out together tonight at the 2019 Golden Globes looking every bit the Hollywood It couple.

PopSugar reports that earlier this week, the couple made an appearance at the Palm Springs Film Awards, where Cooper was honored as the Director of the Year. Before that, however, the last time the two stepped out arm-in-arm was at the 2018 Met Gala, back in May.

For the Golden Globes, Shayk chose a red carpet go-to: a naked dress with plenty of Angelina leg and lots of ornate gold embroidery and sequins. The color seems to be a favorite for the model. Back at the Met Gala, she also wore a gold dress. Cooper opted to leave his rugged A Star is Born beard at home and went back to his usual clean-shaven look paired with an all-white tuxedo and black bow tie.

RELATED: Bradley Cooper Hopes His Daughter Will Be Like Lady Gaga in This One Way

Cooper is nominated for two Golden Globe awards tonight: Best Performance by an Actor in a Motion Picture – Drama and Best Director for A Star is Born. The flick is also up for Best Motion Picture — Drama, Best Original Song – Motion Picture, and Cooper’s co-star, Lady Gaga, is also nominated.