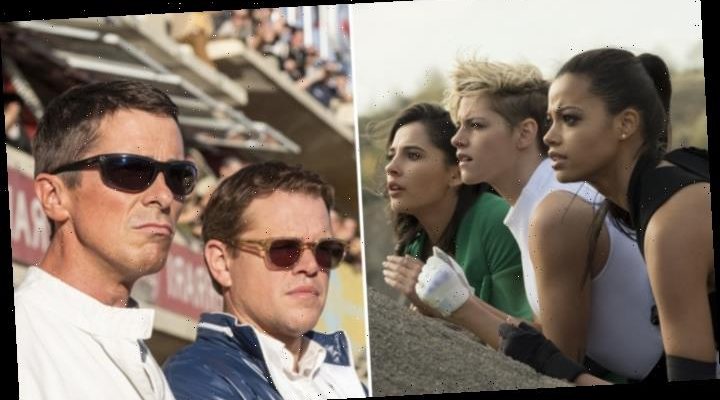 “Charlie’s Angels” is back with a new generation of winged operatives. Will their latest mission — to help revive a sluggish box office — be a success?

The Angels, Kristen Stewart, Naomi Scott and Ella Balinska, will get an assist from fellow newcomers Disney’s historical “Ford v Ferrari” and Warner Bros. thriller “The Good Liar.” But incentivizing audiences to go to the movie theater this year has been no simple task, and ticket sales are down over 5% from 2018 as a result. Adding to their challenges, the trio of new nationwide offerings will have to contend with Disney Plus, the just-launched streaming service offering hundreds of films and TV shows at the click of a button and without the hassle of leaving the couch. More than 10 million people subscribed to Disney Plus on launch day, and it’s entirely possible that potential moviegoers could instead choose to binge “Star Wars” offshoot “The Mandalorian” or watch the live-action “Lady and the Tramp” during their first weekend using the platform.

“Ford v Ferrari” looks to pull ahead of the box office competition and could collect over $20 million when it debuts in 3,500 venues in North America. Disney is predicting a more conservative start in the high teens, which would still likely be enough to top domestic charts. But given its nearly $100 million price tag, “Ford v Ferrari” will need to complete several winning circuits of the box office track to put in it in a profitable pole position. However, international audiences are expected to boost ticket sales when it opens this weekend in most major territories. Oscar buzz for stars Matt Damon and Christian Bale could also lead to a long life in multiplexes.

James Mangold (“Logan”) directed “Ford v Ferrari,” based on the true story about the automotive team at Ford, led by designer Carroll Shelby (Damon) and his British driver Ken Miles (Damon), that builds a race car in an attempt to defeat the legendary Ferrari.

Since merging with Fox earlier this year, Disney has been saddled with a handful of film flops including “Dark Phoenix,” “The Art of Racing in the Rain” and “Stuber,” which have amounted to $170 million in operational losses. While “Ford v Ferrari” might not single-handedly reverse those fortunes, it is poised to be the first Fox release that could become a commercial success for its new owners at Disney.

“Charlie’s Angels” is targeting a slightly softer start and should earn around $13 million from 3,400 theaters, though some projections show that ticket sales could reach higher teens. The action comedy, which carries a $48 million price tag, also looks to benefit from overseas box office receipts, should the film fall short of expectations in North America.

Elizabeth Banks wrote and directed “Charlie’s Angels,” the third big-screen adaption following the 2000 film and 2003 sequel “Full Throttle,” making her the franchise’s first female filmmaker. The newest chapter, putting a feminist spin on the classic series, sees the Angels going global to halt the spread of a dangerous new technology threatening the world. Banks portrays one of the many Bosleys, while Sam Claflin, Patrick Stewart and Noah Centineo joined the cast.

“The Good Liar” is expecting a muted $5 million debut from 2,400 screens. Ian McKellen stars as a con artist who plots to steal the fortune of a wealthy widow (Helen Mirren) he meets online. Bill Condon directed the movie, based on the novel by Nicholas Searle. “The Good Liar” comes at a trying time for Warner Bros. Outside of “Joker,” which is poised to crush the $1 billion mark globally this week, the studio’s recent literary adaptations like “Motherless Brooklyn,” “Doctor Sleep” and “The Goldfinch” have sputtered.

At the specialty box office, A24 is launching “Waves” is limited release. Trey Edward Shults wrote and directed the drama about a Florida family coming together in the face of tragedy. “Waves” has gotten stellar reviews following its premiere at this year’s Telluride Film Festival and could find itself in the awards conversation. The cast includes Kelvin Harrison, Lucas Hedges, Taylor Russell, Alexa Demie and Sterling K. Brown.