Wil Fulton admits that as a kid cereal just bowled him over. His favorites included Lucky Charms, Cinnamon Toast Crunch, Rice Krispies (all the varieties, like Cocoa Rice Krispies and Rice Krispy Treats).

Some 20 years later, Fulton is writing for the website Thrillist, where his childhood passion launched a wild article: “The assignment was basically to eat nothing but cereal for an entire week,” he said.

And so was born a serial cereal eater. For 21 consecutive meals – breakfast, lunch, and dinner – Fulton ate nothing but cereal.

“I ate 82 bowls over the course of the seven days,” he laughed. He averaged 1,735 calories of cereal a day – and consumed a lot of milk. 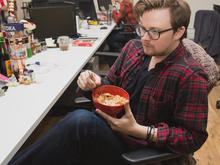 As an experiment food writer Wil Fulton ate nothing but breakfast cereal for a week. He won’t do THAT again.

As the bowls stacked up, he started seeing this lark as a social experiment, to answer an existential question:  “What is cereal’s place in my life, and in the life of people our age?”

Yale University food historian Paul Freedman suggest that eating cereal “is a little bit like reminding yourself that you’re a child, even though your parents are not there.”

But even if cereal’s NOT on the menu, Freedman said the first meal of the day is also the best-liked. “Maybe after waking up, you’re grateful to be alive another day? I’m still here. And I’m hungry!” he laughed.

For hundreds of years, breakfast was pretty standard fare. Freedman said a typical breakfast in medieval times would have been wheat porridge, vegetables from the previous night, and … bacon!

“Good, everyone can relate to that,” laughed correspondent Susan Spencer.

But by the early 1900s, W.K. Kellogg revolutionized mornings with corn flakes. And in the 1920s Minneapolis-based competitor General Mills introduced Wheaties. Cereal is such a big deal at General Mills it has its own president, Dana McNabb, who is definitely enthusiastic about cereal, and certainly about breakfast. 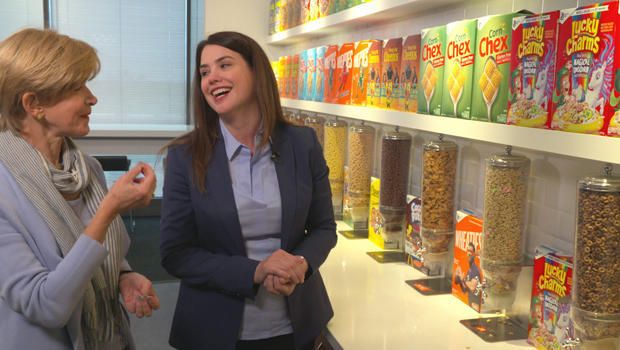 But around the country, cereal fatigue may be setting in. Instead, eggs are on a roll, with breakfast sandwich sales up 10 percent, while cereal (though still an $8 billion industry) has dropped $1 billion over the past nine years.

So, McNabb’s team got to work on re-energizing some old favorites. When Spencer asked what “re-energizing” means, McNabb replied, “Bringing excitement back to people’s relationship with cereal.”

Excitement often seems to involve sugar, as with the new Chocolate Peanut Butter Cheerios. Or as Spencer referred to it, “breakfast dessert.”

“Is the world a better place for having Chocolate Peanut Butter Cheerios?” she asked.

“I would have to say definitely, yes!” McNabb replied.

She says another brilliant stroke – shaping the marshmallows in Lucky Charms into tiny unicorns – has boosted sales by double-digits. 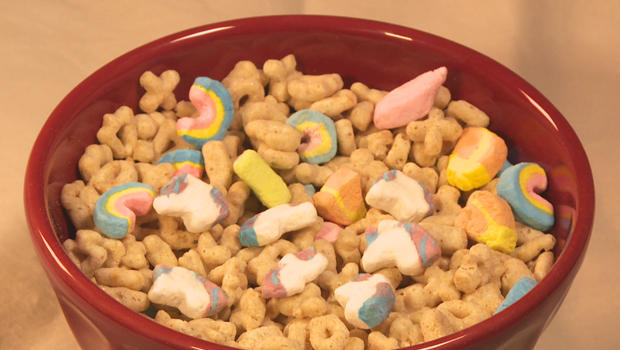 But is it the most nutritious choice? Probably not, said Wendy Lopez, a registered dietitian, the perfect person to ask the big question: “What do YOU eat for breakfast?”

“I actually have a smoothie,” Lopez said. “Usually I’ll put some kind of yogurt, and I’ll put vegetables in there, too. I know it sounds a little crazy …”

“It’ll be something like spinach or cucumber, and then I’ll balance it with banana.” 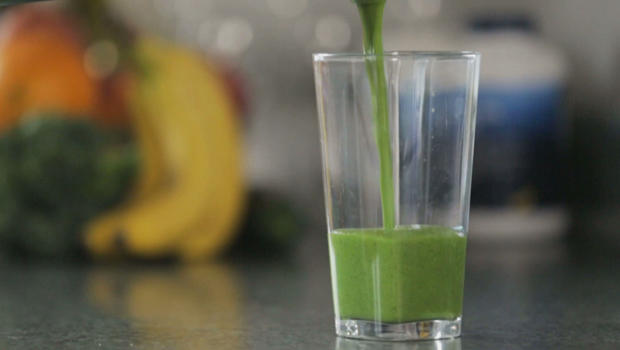 Breakfast smoothie with spinach and cucumber, with detectable notes of banana.

Spencer, who recoiled at the suggestion of blending spinach and cucumber in the morning, asked Freedman, “Is there anything that you just absolutely cannot in your worst nightmare imagine eating for breakfast?”

“Pumpkin spice stuff,” Freedman replied. “I do draw the line at pumpkin spice.”

Drawing the line is what Wil Fulton probably wishes he’d done.  After 82 consecutive bowls of cereal, he didn’t quite feel himself. Go figure.

The all-cereal diet, he said, “made me lethargic, it made me confused.”

“Of course, in fairness, nobody suggests that anybody eat Lucky Charms exclusively,” said Spencer.

“No. This is something I totally brought on myself.”

Spencer asked Lopez, “All my life, people have said, ‘Breakfast is the most important meal.’ Is that true?”

“Eating breakfast really helps to set the tone for what you’re gonna be eating for the rest of the day,” Lopez replied.

“If I could eat my favorite breakfast every day, it would just be bacon and eggs.”

“Do you have any favorite vegetables that you enjoy?”

“Not that go with bacon and eggs in a smoothie!” Spencer replied.