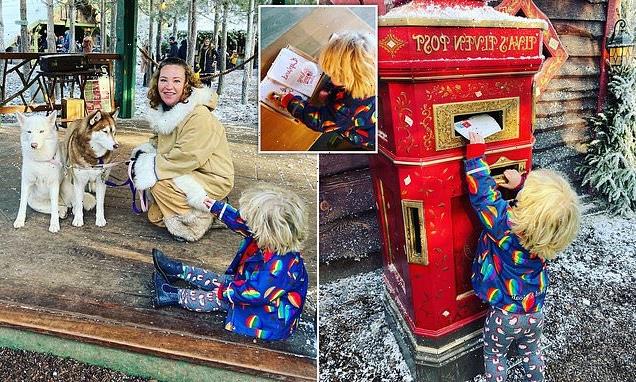 Boris and Carrie Johnson’s son Wilf has wisely got his letter to Santa in the post early this year, sending off the missing in a special postbox during a festive outing with his doting mother.

Mrs Johnson took to Instagram to share photos of an adorable outing with the toddler at the LaplandUK attraction in Ascot, where he got to meet huskies and one of Santa’s elves.

In order to protect her son’s privacy, the former PM’s wife has only ever posted pictures of the back of Wilf’s head.

It comes just days after Carrie shared adorable photos of Wilf meeting Father Christmas for the first time on another festive day out. 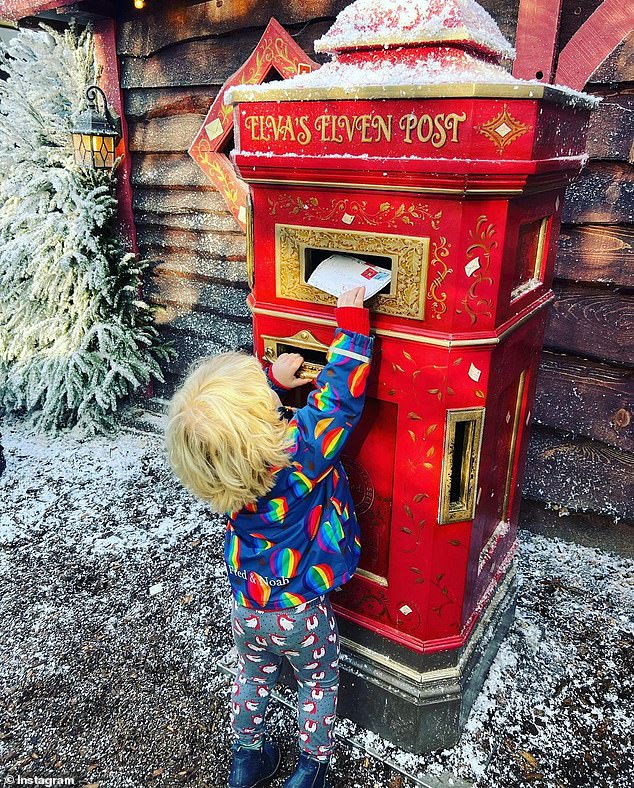 Boris and Carrie Johnson’s son Wilf has wisely got his letter to Santa in the post early this year, sending off the missing in a special postbox during a festive outing with his doting mother at LaplandUK in Ascot

On his most recent day out, the toddler – who has a signature mop of blonde hair just like his father – looked cute in a colourful £55 jacket from Fred & Noah, patterned with hot air balloons, and leggings emblazoned with foxes.

Mrs Johnson is clearly making the most of the festive season with her son, who was born in April 2020. 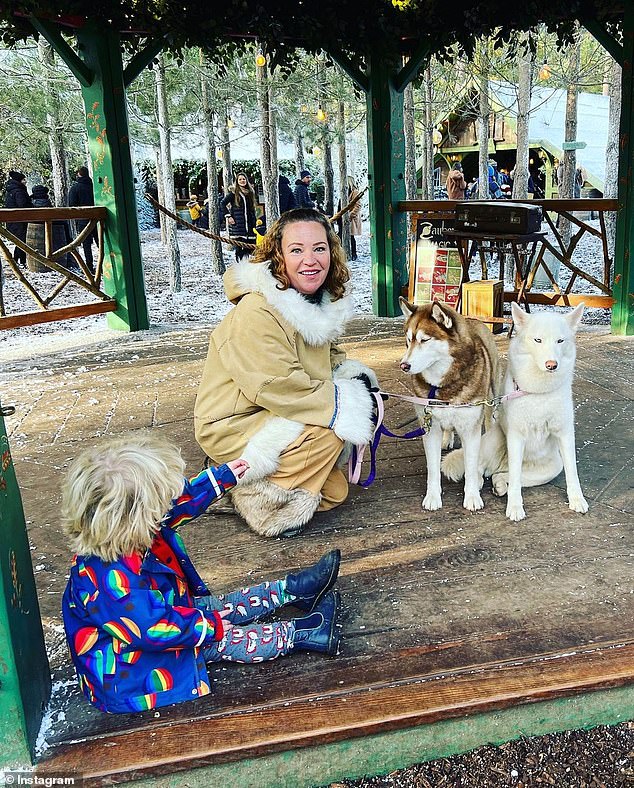 The toddler looked delighted as he pointed to two husky dogs at the attraction, which tells the story of Santa and his elves 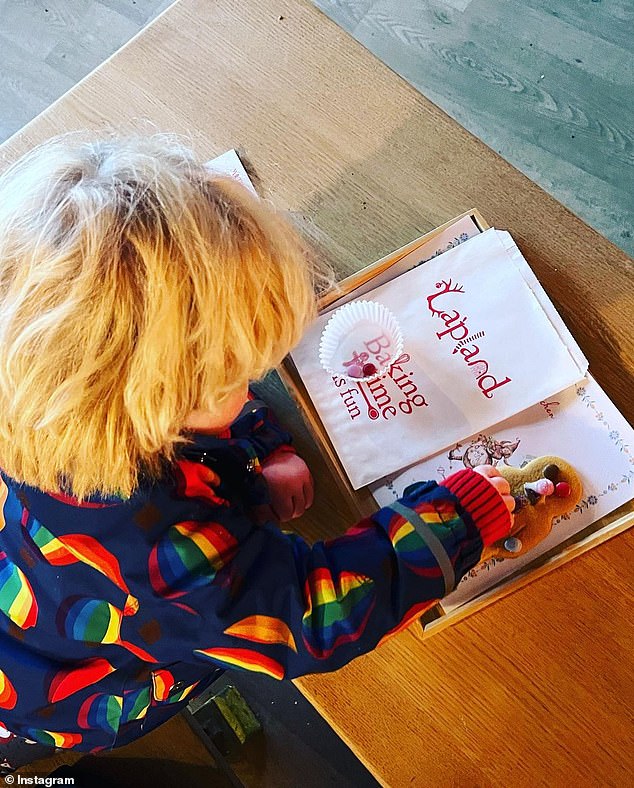 Snack time! Wilf was seen enjoying a gingerbread man during the outing 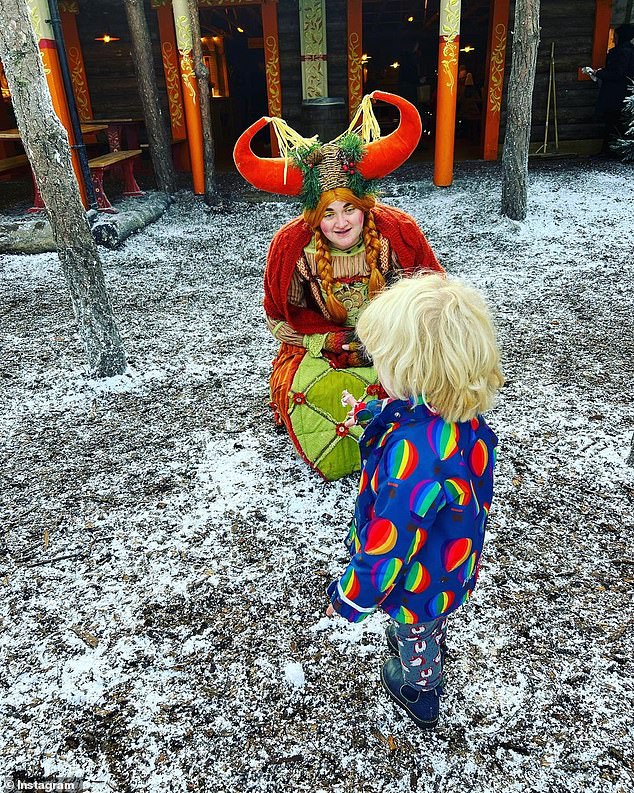 Meeting Santa’s elves: The youngster had a great day out and got to meet some of Father Christmas’ helpers

At the end of November, the wife of the former PM posted a snap of her and her two-year-old spending some quality time together at Winter Wonderland in Hyde Park.

Earlier this week, Mrs Johsnon treated her 67,000 Instagram followers to a sneak peek from the trip she took to the Anya Hindmarch Santa’s Grotto pop-up in London earlier this month.

The former PM’s wife posted a series of six sweet images of her son enjoying the festivities following their visit to the designer’s store in Chelsea, which has undergone a festive makeover. 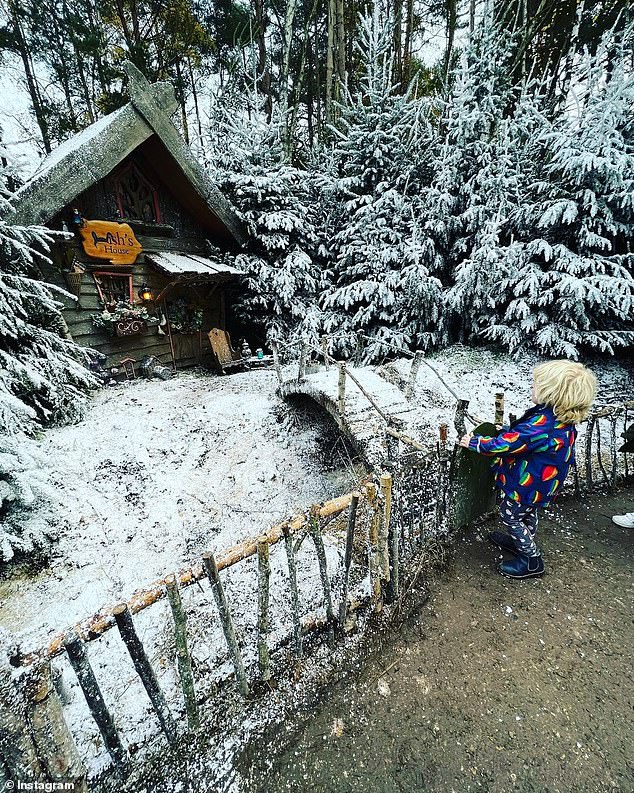 Step into Christmas! Wilf was snapped outside one of the elf houses at the snow-covered festive village in Ascot 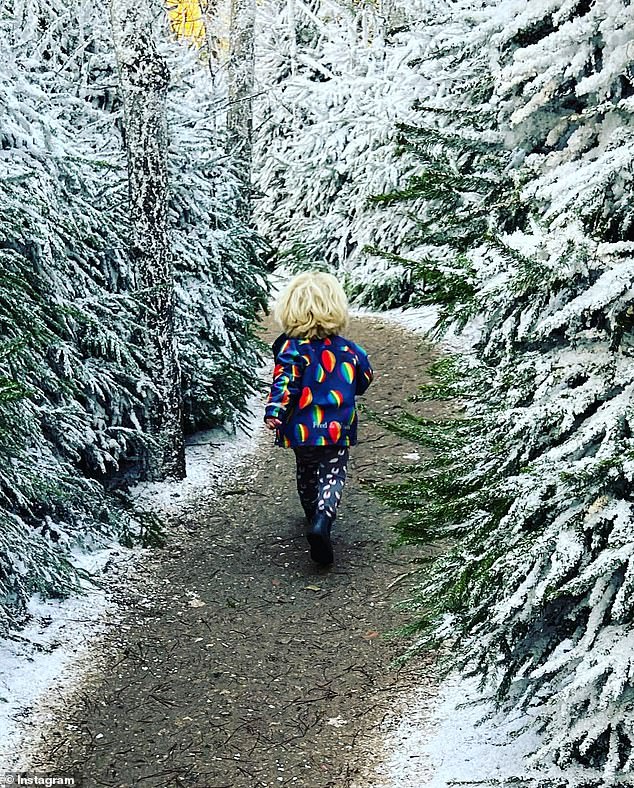 Mayeb Santa is around the corner! Carrie Johnson shared a series of snaps of Wilf to Instagram, but only photographs her son from behind to protect his privacy 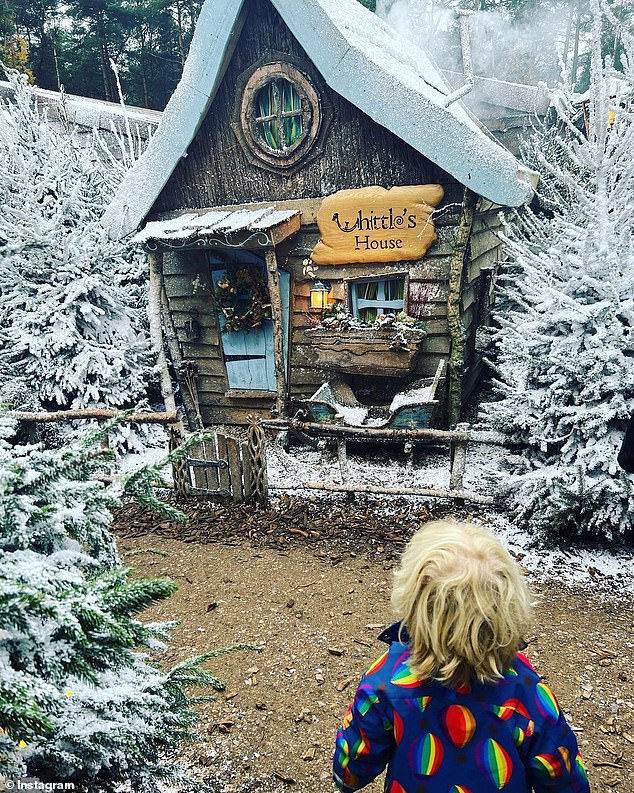 Who lives in a house like this! Wilf made his way around the elf village and posed for a series of festive snaps

According to the designer’s website, a ticket for one adult and child cost £45 – and families can expect to enjoy walking through ‘crunchy snow’ and have a story read to them by Father Christmas himself.

What’s more, the inquisitive toddler was also seen with two other boys happily chatting to the festive figure. 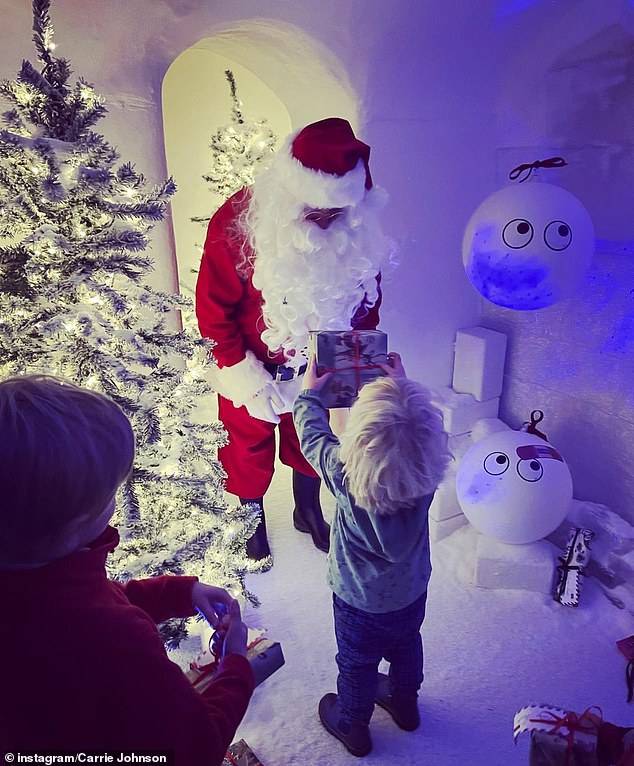 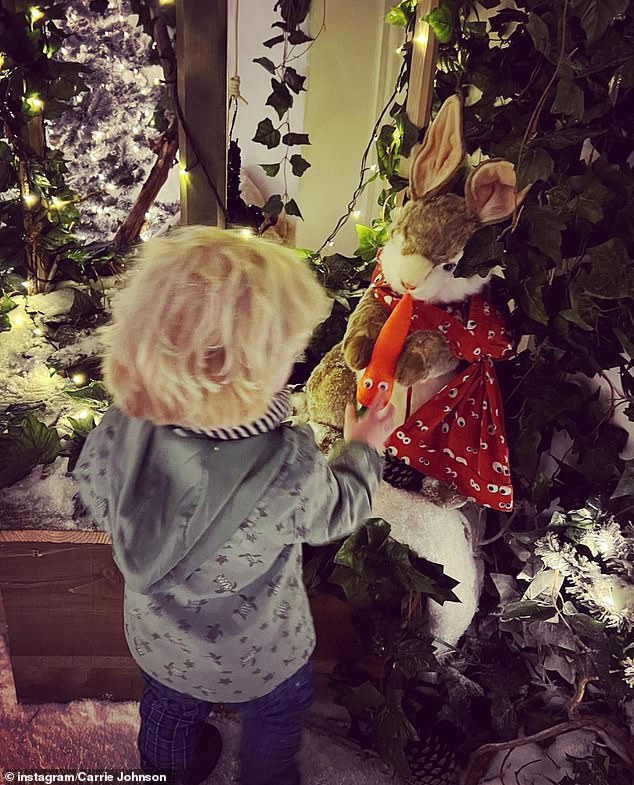 Tickets for Anya’s Grotto cost £45 for an adult and child and families are promised the chance to play in ‘crunchy’ snow. Pictured: Wilfred marveling at a plush bunny Christmas tree decoration 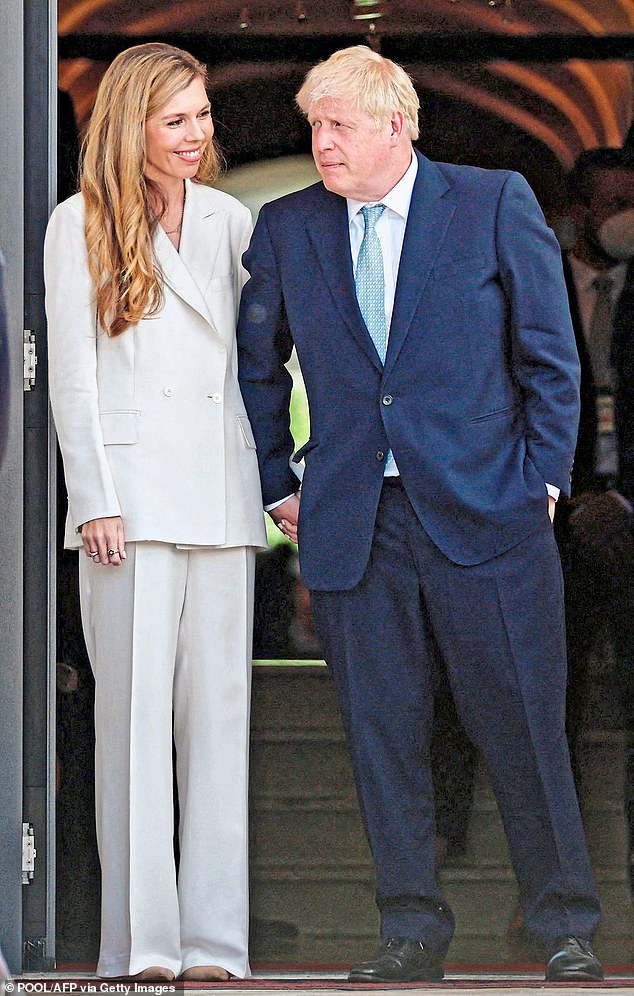 Boris Johnson and wife Carrie share children Wilfred and Romy. The couple pictured in June 2022 ahead of the G7 Summit

A third picture showed Boris Johnson’s youngest son pointing at Santa’s sack of presents as he perched down next to an elaborately decorated mantelpiece.

Once he had spent some quality time with Santa, Wilf then turned his attention to one of several trees on display in the designer grotto – including a plush toy bunny.

The final photo in the carousel shows the sweet toddler happily playing with a friend around some of the white-sprayed Christmas trees in the grotto.

But this isn’t the only festive activity Carrie and Wilf have gotten stuck into this year.

Earlier this year, Carrie posted a snap of her and her two-year-old spending some quality time together at Winter Wonderland in Hyde Park.

In a photo taken on a merry-go-round, Wilfred is seen sitting on his mum’s lap as the two perch on a model leopard. 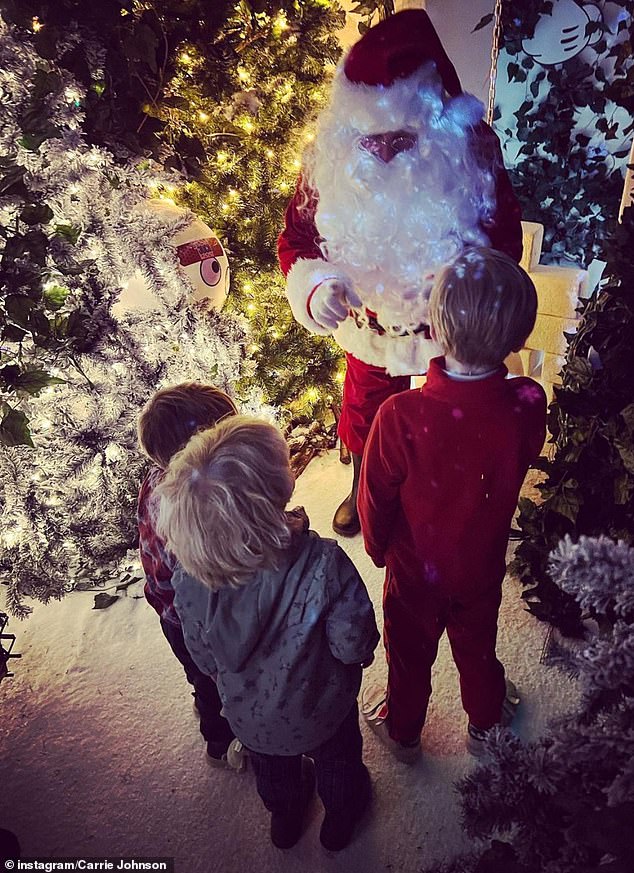 Wilfred was pictured with Father Christmas in three of his mother’s six photos. Pictured gazing up at Santa with two other boys 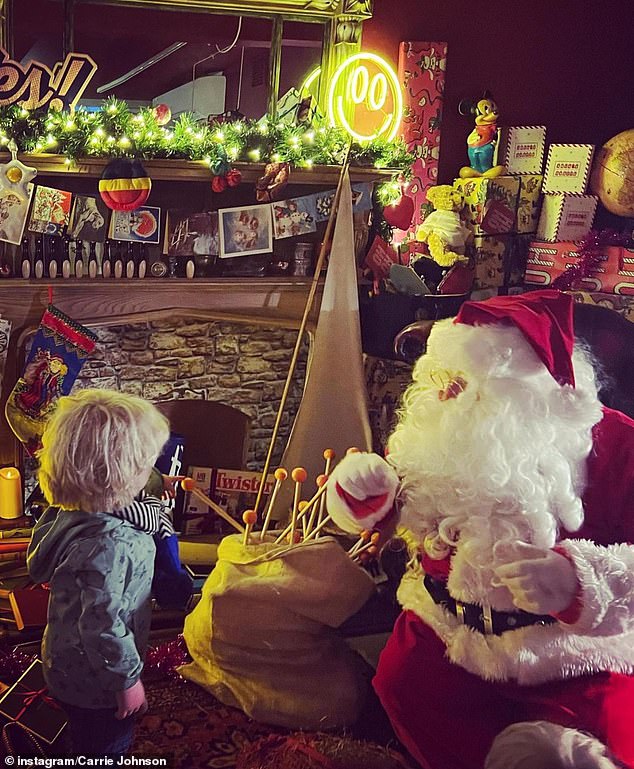 In a third picture with Father Christmas, the inquisitive toddler was seen pointing at his bag of presents 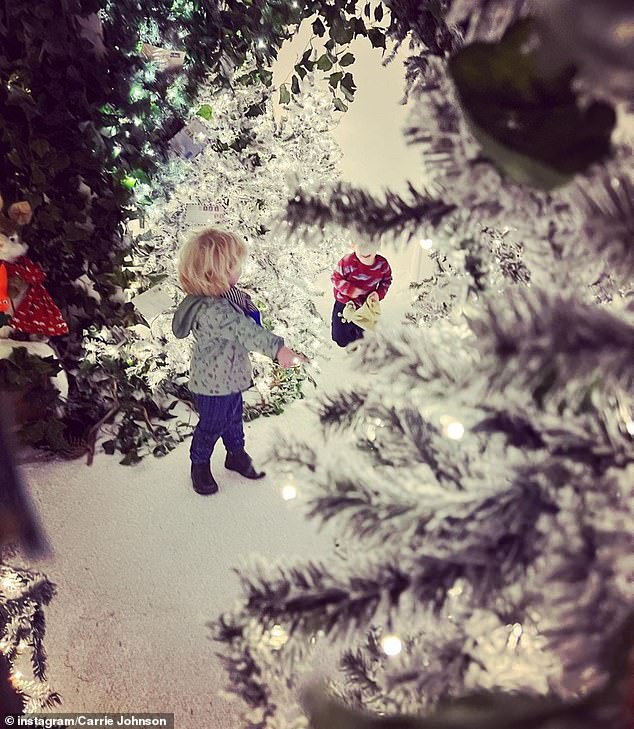 Proud mother Carrie thanked Anya Hindmarch for ‘bringing the magic’ in her Grotto this year. Pictured: Wilf enjoys running around the faux snow topped trees with a friend

Dressed in a space-themed jacket and jeans, the adorable toddler – who has inherited his dad Boris’ blonde locks – was pictured holding onto the gold pole as he snuggled up with his mother.

Similarly to her most recent post, Carrie covered Wilfred’s face in the social media image with a Winter Wonderland location tag.

Shortly after their first son was born in May 2020, Carrie and Boris announced his full name as Wilfred Lawrie Nicholas Johnson, with the first name a tribute to Mr Johnson’s paternal grandfather, Osman Wilfred Kemal, and Lawrie a reference to Ms Symonds’ grandfather. 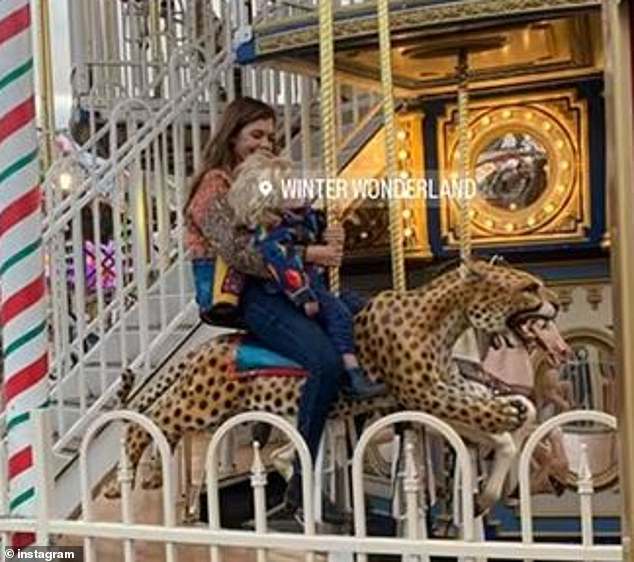 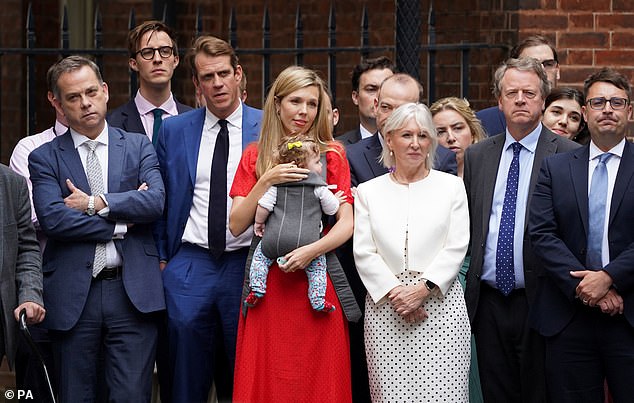 In a heart-warming Instagram post revealed the boy’s name, Carrie revealed that the middle name Nicholas was a tribute to two NHS doctors ‘that saved Boris’ life following his battle with coronavirus.

As well as Wifred, the couple have a daughter together called Romy Iris Charlotte Johnson, who was born on December 9, 2021.

She was born at University College London hospital and was named after Carrie’s aunt Rosemary.

When announcing their daughter’s name, Boris and Carrie explained how Iris came from the Greek word meaning rainbow and Charlotte was chosen as a tribute for Boris’s late mum who they ‘miss so much’.