The verdict comes months after Swartz was acquitted of second-degree murder by another jury that had deadlocked on manslaughter charges, allowing prosecutors to pursue the case again.

Border Patrol agents are rarely criminally charged for using force. But the killing of 16-year-old Jose Antonio Elena Rodriguez sparked outrage on both sides of the border and came at a time when the agency was increasingly scrutinized for its use of force.

“My client is very relieved. He has had to live with the burden of this case hanging over his head for years. He is glad that it is finally over,” Swartz’s attorney, Sean Chapman, said in an email to The Associated Press.

Outside the courthouse, a group of nearly 100 people blocked a downtown intersection in protest, CBS affiliate KOLD-TV reported. No arrests were made.

Group has moved east toward downtown and now making their way back to Congress/Granada intersection. @Tucson_Police urging you to stay out of the area as they’ve blocked #Tucson streets. @TucsonNewsNow pic.twitter.com/n6oO2tEpdW

One sign protesters carried said, “Abolish Border Patrol,” while another read, “No justice, no peace” in both English and Spanish.

“We fully respect the jury’s decision, and we thank every member of the jury for the time and attention given to this trial,” Elizabeth A. Strange, first assistant U.S. attorney for the District of Arizona, said in a statement.  “This was a difficult case, and I commend the trial team and law enforcement officers who assisted in the prosecution.”

Prosecutors said Swartz was frustrated over repeated encounters with people on the Mexico side of the border fence who throw rocks at agents to distract them from smugglers. They say he lost his cool and fatally shot Elena Rodriguez. Swartz fired about 16 rounds, and the boy was hit at least 10 times in the back and head. 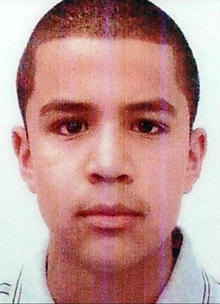 Swartz has said he was following his training and defending himself and other law enforcement officers from rocks, which he said could be deadly.

Prosecutors acknowledge that Elena Rodriguez was throwing rocks at agents while two smugglers made their way back to Mexico, but they said that wasn’t justification for taking his life.

Chapman said Elena Rodriguez endangered the lives of the agents and a police officer who was on scene.

The verdict comes as President Donald Trump has deployed troops to the border to support U.S. authorities in response to a migrant caravan from Central America. The troops have been given authority to protect Border Patrol agents and other personnel, even though there have been no instances of violence against U.S. authorities.

Swartz still faces a civil rights lawsuit from the American Civil Liberties Union on behalf of the teen’s mother.

A spokeswoman for the U.S. attorney’s office said prosecutors haven’t decided whether to try Swartz again on the voluntary manslaughter charge.