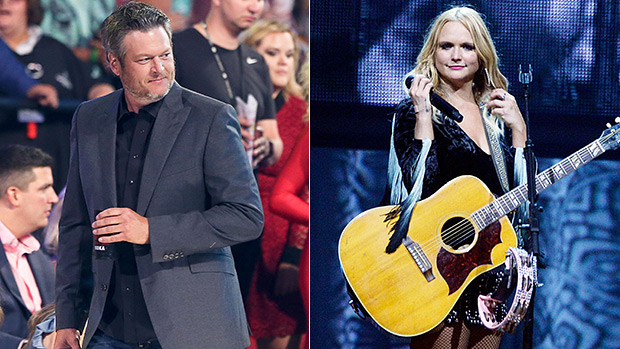 Yes, Blake Shelton has listened to Miranda Lambert’s divorce anthem, ‘Got My Name Changed Back,’ HL has EXCLUSIVELY learned! So, how did he feel when she sang about breaking her ex-husband’s ‘heart’ with her band?

Blake Shelton, 42, wasn’t offended when ex-wife Miranda Lambert, 34, celebrated divorce with “Got My Name Changed Back,” her latest track with Pistol Annies! Fans speculated that the band’s new single is partly an ode to Blake and Miranda’s 2015 divorce, which is understandable, considering that Blake is Miranda’s only ex-husband! But the “I Lived It” singer, who is now dating Gwen Stefani, didn’t interpret any shade when he listened to his former lover’s track. “Blake has listened to ‘Got My Name Changed Back’ and he actually likes it, he thinks it’s really catchy and a good old fashioned country tune,” a source close to Blake EXCLUSIVELY shares with HollywoodLife. Yes, really — even after Miranda sang in one of the verses, “Well I’ve got me an ex that I adored, but he got along good with a couple road whores.” We learned why Blake thought the song was a bop, and not a diss track!

“Blake doesn’t see the song as a personal attack at all, because he knows what went down between himself and Miranda and his conscience is clear,” our source continues. Although both country music stars were rocked by cheating rumors after their split, all alleged drama is far behind Blake. Our source adds that Blake “understands that people are always going to try and read things into lyrics, but their relationship is so far in the past—at least for him, that it’s laughable really.” And we’re talking about the same guy who admitted that he hit “rock bottom” after divorcing the “Little Red Wagon” singer to Billboard in a 2016 interview! Well, Pistol Annies member Angaleena Presley did claim that the new song has “nothing to do” with “no one in this group,” as we’ve told you after the track’s music video came out on Oct. 29. But there’s another reason Blake isn’t reminiscing on his former marriage of four years!

“Blake’s life is with Gwen now, she is his everything, and Miranda seems like decades ago, it’s ancient history and definitely a closed book,” our source continues. Blake and Gwen, who once co-starred together on The Voice, confirmed their relationship in November of 2015. Now three years into their relationship, Blake is instead thinking more about a different music project: the deluxe edition of Gwen’s Christmas album, You Make It Feel Like Christmas, which she re-released on Oct. 19!

As we’ve told you, Gwen’s boyfriend tweeted the sweetest praise about the new tracks added to the 2017 album. “Ladies and Gentlemen… THIS is how you make awesome awesomer… The best bestester… Perfection more perfectiony!!” he tweeted on Oct. 26. Blake even switched his Twitter profile picture to the cover art of Gwen’s Christmas album. If your boyfriend has your face as his profile picture, it’s official — he’s moved on from his ex!